A few months ago, Soma announced plans for a Visual Studio Express 2012 edition for Windows Desktop. Today, we are happy to share that this new Express product is available for download. (You can find the system requirements and download details here.) This post is written by Jennifer Leaf, one of the program managers working on the new product.

It would be impossible to list every feature in Visual Studio Express 2012 for Windows Desktop. However, in this post I want to tell you about some of the new tools and capabilities in the product that have not been available in any other Express products in the past. I’d also like to answer some of the questions you’ve been asking about what we’re including in this edition. Unless otherwise mentioned, the features listed are supported for all languages that are included in Visual Studio Express 2012 for Windows Desktop – C++, C#, and Visual Basic.

In Express for Windows Desktop, you’ll be able to create the same projects that you could in Visual Studio 2010 Express, for example, WinForms, WPF, Console and Class Libraries for Visual Basic and C#, and Win32 projects, class libraries, and CLR apps for C++. You can also combine C++, C#, and Visual Basic projects into a single solution, making it easy to write a single application using any of the available languages. Finally, you can round-trip your projects with Visual Studio 2010 SP1.

We wanted to make it easy for you to write and run unit tests for your projects. To make that possible, Express for Windows Desktop includes our existing unit test framework for C# and Visual Basic and the new native C++ unit test framework. This lets you write, run and debug unit tests directly inside Visual Studio. Unit Test project templates are also included so you can start writing unit tests right away.

We added a targeted set of code analysis rules to Express for Windows Desktop, which are the same code analysis rules that we added to Visual Studio Express 2012 for Windows 8. For C++ projects, these rules help detect common coding errors, such as buffer overflows, dereferencing null pointers, using uninitialized variables, or misusing APIs. These errors can potentially lead to security vulnerabilities or application crashes if the errors are not fixed. For managed projects we included rules that help ensure correct object disposal, comparison, and garbage collection performance.

This release, we introduced Team Foundation Server Express 2012, as well as the Team Foundation Service at www.tfspreview.com. We also included Team Explorer, which allows for integration with your TFS server into all of our Visual Studio 2012 Express products, including this one. We wanted to make it simple for you to use the source code control, work item tracking, and build automation that TFS provides. 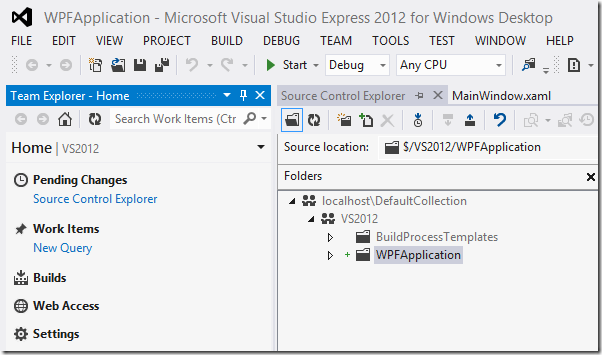 Express for Windows Desktop includes NuGet, which makes it easier than ever to integrate libraries developed within your organization, or from 3rd parties, into your projects. To add or manage package dependencies for your projects, simply select the “Manage NuGet packages…” option from the project, or from the solution context menu in Solution Explorer. 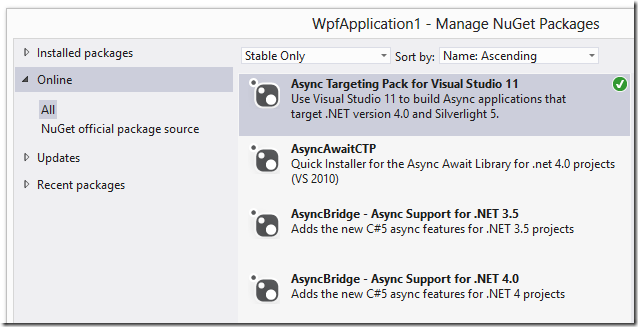 The new VS 2012 language and library features are available in Visual Studio Express 2012 for Windows Desktop, including the async and await keywords in Visual Basic and C#, C++ AMP, and improvements to C++ 11 Standards conformance.

You can use Express for Windows Desktop with your Visual Basic and C# applications to target both .NET 4.0 and 4.5.

We also included the C++ 64-bit cross-compiler and libraries, so you can build 64-bit desktop applications without needing to install an older version of the Windows SDK.

In previous Express products, the ability to connect to a data source was limited to Database File. In Express for Windows Desktop, this capability has been extended to support all SQL Server data sources. For example, in Database Explorer, you can connect, navigate, query against and edit database objects through the latest SQL Server 2012 and Windows Azure SQL Databases.

We look forward to hearing your feedback on the release. Please submit bugs to the Visual Studio Connect site, and suggestions to Visual Studio UserVoice.

Visual Studio Blog October 5, 2012
0 comment
NuGet for Windows Store App Developers
In Visual Studio Express 2012 for Windows 8 you’ll see that we have included the popular NuGet package manager by default and customized it to include a Windows 8 ...