These are just a few examples of when you may want to use port tunneling with your web projects. This feature depends on a private preview which you must sign up for.

1: Sign up for the private preview of port tunneling in Visual Studio

To get started with the, sign up for the private preview at the link below. You should sign in with the same account that you are using in Visual Studio. Port tunneling will not work without signing up for this preview.

We added support for this preview feature in Visual Studio 2022 17.3 Preview 1.1, but you should use the latest current preview available. You can download that at the link below.

3: Enable the preview in Visual Studio 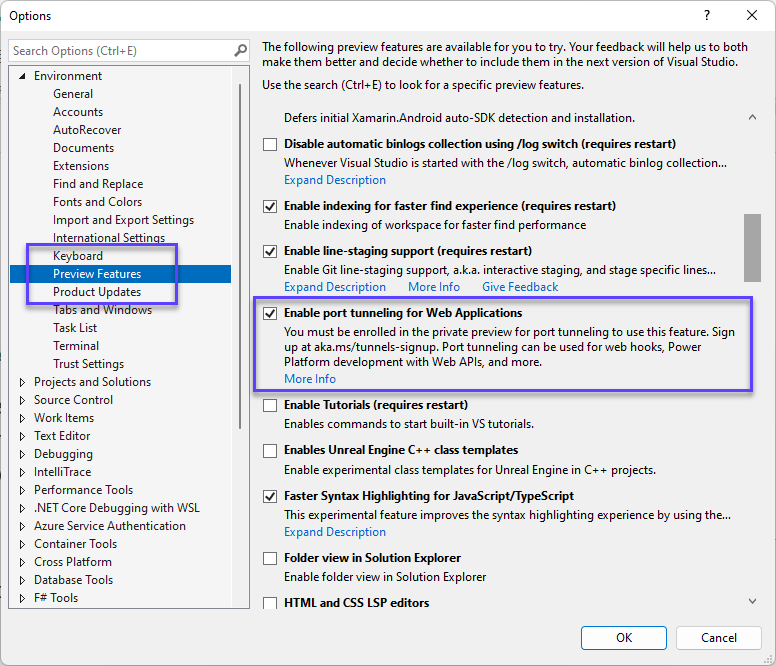 When developing ASP.NET Core projects in Visual Studio, the settings to launch your application are stored in the file at Properties/launchSettings.json. This file contains one, or more, launch profiles for your web app. In order to enable the tunnel to be created, or connected, when you run your app, add the property “createTunnel”: true in the launch profile. For example, below is a full launchSettings.json file for an ASP.NET Core web project.

The property that needs to be added is in bold above. When you run, or debug, your application in Visual Studio. Instead of launching the localhost URL, the tunnel URL will be launched, which will then connect to the localhost endpoint. Take a look at the animation below.

Note: when this feature was originally implemented the access was set to public by default. In more recent updates, we default to private access, where only the signed in user has access to that tunnel. You can control the access with the property “tunnelAuthentication”, which can be set to “private”, “org” or “public”. For org access, the user accessing that tunnel must have access to the organization in which the tunnel was created.

When the web app is launched, you can see that the browser is not navigating to the localhost URL, but instead using the public tunnel URL. This URL can be accessed outside of your local environment. You could share the public URL with a friend or colleague to test out the application. If you wanted to test your web app on an external device like a phone or tablet, you can navigate to the URL on the device. To simplify this, you can generate a QR code to the URL in the Edge browser. To create the QR code in Edge, click on the URL bar and the QR code button should appear. Click on that to generate, and view, the QR code. 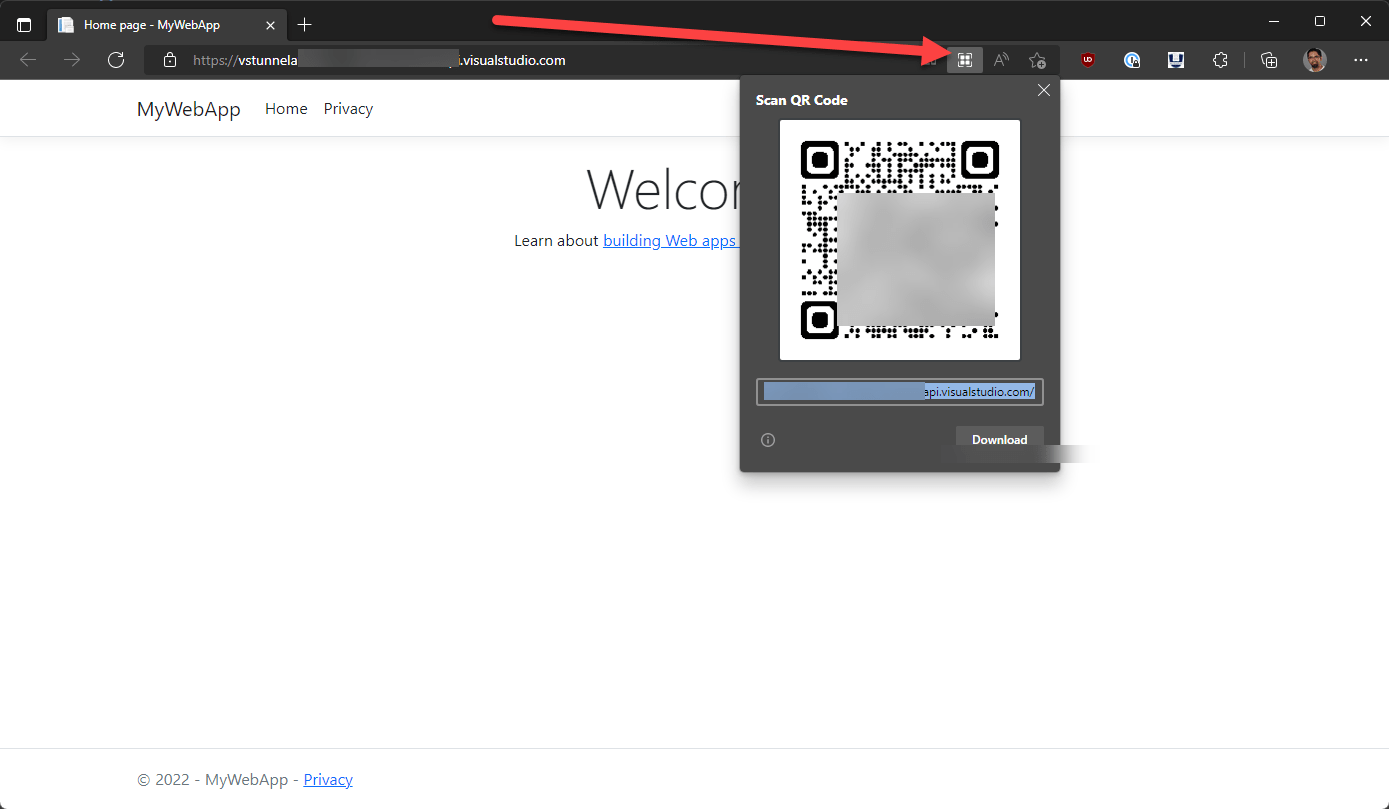 You can scan this QR code with your phone, or tablet, to navigate to the URL.

In the 17.4 Preview 3 release of Visual Studio 2022, several changes have been made. Those changes are summarized below.

The property names used in launchSettings.json have changed 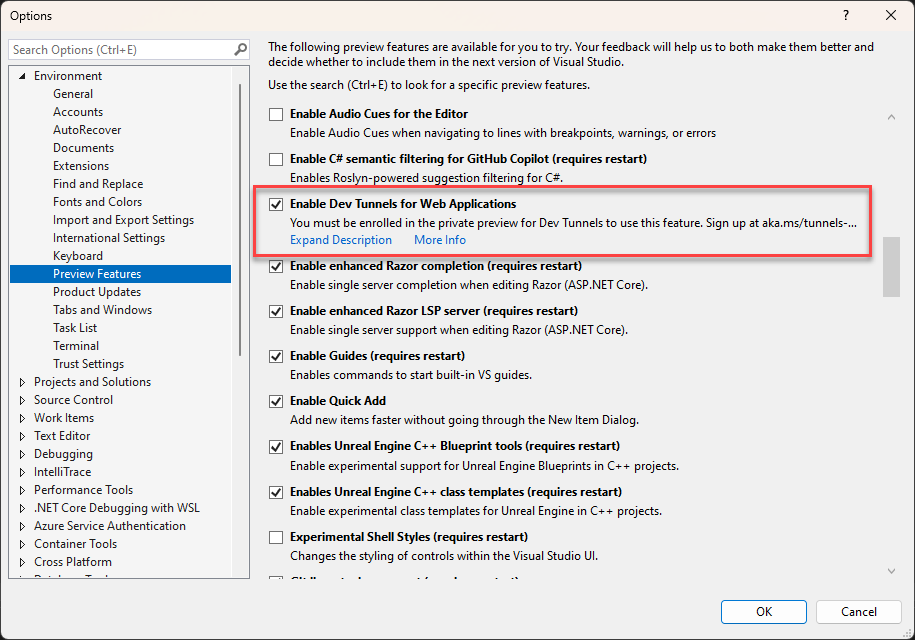 In 17.4 Preview 3 we have added support for both MSA and GitHub accounts when using dev tunnels. In the signup form, you’ll now see an option to input your GitHub username.

Environment variable to get the dev tunnel URL

When a project is started with tunnel support, an environment variable is added to the process VS_TUNNEL_URL which can be used to get the tunnel URL which is being used. In a multi-project start scenario, when a project is started with a tunnel, projects that start after that project will get an additional environment variable named VS_TUNNEL_URL_{PROJECTNAME}, where {PROJECTNAME} is the name of the project that started earlier with a tunnel.

What to do if you run into issues?

This is an early preview, so you may run into some issues when using this feature. The best method to report issues is using the built in Report a Problem support in Visual Studio. You can also leave a comment here or reach out to Sayed on Twitter at @SayedIHashimi.

In this post we introduced the new web tunneling feature for ASP.NET Core apps in Visual Studio, and what steps you should take to try it out. This is just an early preview; we will continue to improve this experience so that we can release this in a non-preview build. Please try it out and let us know how it’s working for you.

Chris Hardy
May 26, 2022
19 comments
Improved doc management personalization
Visual Studio 2022 allows you to personalize your IDE so you can code the way you want. We’ve added new document management capabilities so navigating tabs and ...