In order to build such a cross platform multi device application, Visual Studio uses a Cordova utility known as the Cordova command-line interface (CLI). The CLI allows Visual Studio to build projects for many platforms at once, abstracting away much of the functionality of lower-level shell scripts. The CLI copies a common set of web assets into sub-directories for each mobile platform, makes any necessary configuration changes for each, and runs build scripts to generate application binaries. The CLI also provides a common interface to apply plugins to your applications. Let us see how Visual Studio uses the Cordova CLI while building such application.

How does VS combine with Cordova CLI to build my multi device hybrid application? Our pre-processor (vs-mda) is a node JS script that strings together a series of Cordova CLI commands as part of the build: 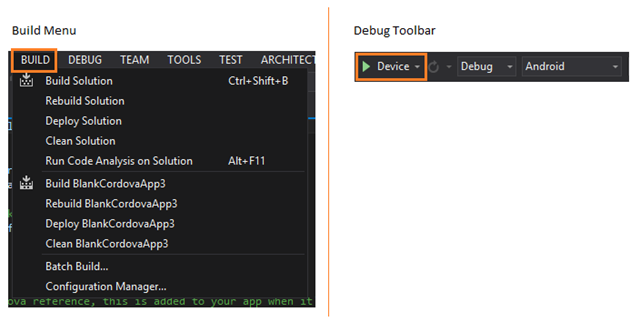 One thing to mention is that for Cordova to build the native application, during its compile step, it needs the SDK’s for target platforms already installed.

As mentioned above, to be able to build for the iOS platform, the iOS SDK must be installed on your system and hence an iOS app cannot be built on Windows. So to build for iOS, we provide a remote build agent called vs-mda-remote that runs on a remote Mac machine or locally if you are using Visual Studio inside Parallels on a Mac. For building iOS, vs-mda prepares the CLI project exactly as it would for any platform that it builds locally for and then transfers the contents over to vs-mda-remote on the Mac for compilation and packaging.

The complete build process can be illustrated as:

How do I run my multi device hybrid application?

After the native application is built, Visual Studio applies different techniques to run/emulate the app on different platforms.

For example, in the case of Android, the CLI “Cordova emulate android” command uses the Android debug bridge to deploy the app to the running instance of the emulator that is configured using the AVD (Android Virtual Devices) manager. Here is how you can configure your Android device or emulator. In future releases, we intend enhance this interaction in VS to allow more flexible selection of Android emulators that you have locally configured and devices connected to your host machine.

To run apps on iOS, VS uses ios-sim to start up simulator on the remote Mac machine. If you run the app to device, VS builds and then adds the app to your iTunes for you to deploy it to your device from Windows. In the CTP3 release, we have added support to directly deploy, launch and debug the app on a device connected to your the remote Mac build agent.

We also provide you an option to launch your app in the Apache Ripple simulator before you deploy it to your device. Through Ripple, you can build your application using a traditional web developer workflow and even simulate common Cordova plugins like the camera. From there you can move on to native devices and emulators to add in more advanced features and finish and refine your app on each of your target devices.

Azure Virtual Machine Images for Visual Studio
Over the last year we have been constantly expanding our Visual Studio image offerings for the Microsoft Azure virtual machine gallery. The images have proven to be very ...

Visual Studio Blog January 8, 2015
0 comment
Visual Studio Tools for Apache Cordova and the remote mac agent
At the Connect(); event, we showed yet more of what we’re doing to enable developers to use Apache Cordova. Cordova is a framework you can use to build hybrid mobile ...