Use a CSV File to Populate Parameters of PowerShell Cmdlets

Summary: Learn how to use a CSV file to populate parameters of Windows PowerShell cmdlets.

Hey, Scripting Guy! I have a problem. I would like to be able to read content from a comma-separated value (CSV) file that contains a list of WMI classes and servers that I would like to query. I need to be able to read the CSV file, and based upon the data contained in that CSV file, I need to create a query on the fly and execute that query. I am afraid it is too complicated, but if I can do this, it will make things a whole lot easier for us at work. Do you know any secret tricks to help us out of our dilemma?

Microsoft Scripting Guy Ed Wilson here. Getting to go to different places and talk to people about Windows PowerShell is a lot of fun. However, there is a downside—expense reports. I wish there were a Windows PowerShell cmdlet called Get-Expense, and another one called New-ExpenseReport. If there were, I could use a command such as this one:

That is the beauty of the Windows PowerShell pipeline. It looks at incoming properties, and seems to match them with similar items on the other side. Therefore, I can easily type the following:

And the command works. This is a really cool example because the Get-Process default property is name and the default property for Stop-Process is id. The Windows PowerShell pipeline figures this stuff out. Cool.

If a cmdlet or advanced function does not accept piped input, all is not lost because you can always use the Foreach-Object cmdlet and manually map things inside that cmdlet’s scriptblock.

The key here is that when importing a CSV file via the Import-CSV cmdlet, each column becomes a property of an object. The other key here is that in a pipeline situation, $_ refers to the current item on the pipeline.

Using this as background, I want to look at a sample CSV file such as you described. The first column contains a WMI class name, and the second column is the computer name to use. The sample CSV file is shown in the following figure. 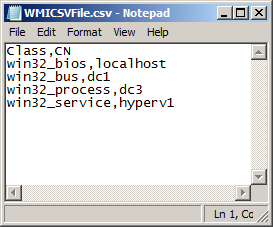 The following steps are required to read a CSV file and create a WMI query.

The command to read a CSV file and automatically query WMI along with the associated output is shown in the following figure. 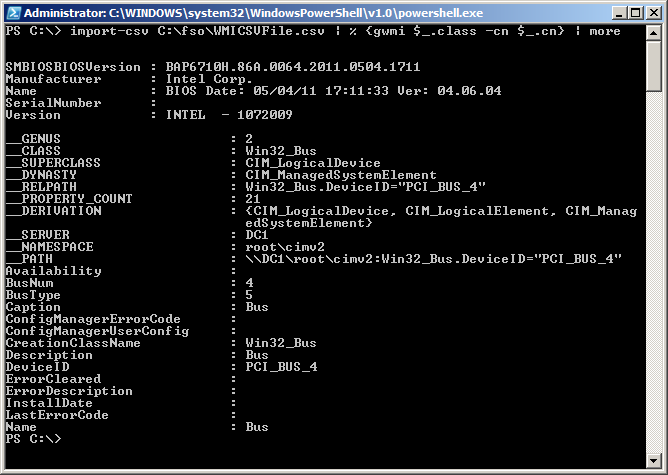 SC, that is all there is to using a CSV file for input to other commands. This also concludes CSV Week. Join me tomorrow for the Weekend Scripter.