The Scripting Wife and I left Oslo and traveled to Copenhagen via train. There we boarded a sleeper train, and woke up the next day in The Netherlands. We were met in Utrecht at the train by Microsoft PFE Stefan Stranger, and shuttled immediately to the first ever Dutch Windows PowerShell User Group. We arrived just in time for Stefan to make his presentation. He made an excellent presentation about using Visual Studio Team Services for source control for Windows PowerShell. He has written a module that permits checking scripts in and out directly from within the Windows PowerShell ISE. Here is a picture of Stefan. Stefan did a great job, and I have asked him to think about writing up his technique and his module into a guest Hey, Scripting Guy! blog post. 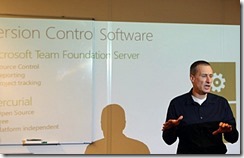 Next up was Jaap Brasser who spoke about querying Active Directory from Windows PowerShell. It was an excellent presentation and was very well received. I also asked Jaap if he would like to write up a guest blog post.

We headed out to lunch at the Eindhoven football stadium. One of the things that was really cool, in addition to the lunch, was that we were permitted to go out into the stadium and take a couple of pictures. Here is the stadium.

Upon returning from lunch, it was time for me to speak – I had the remainder of the afternoon and did two sessions. Of course, I began the presentation with Highway to PowerShell … here is a picture of the sold out standing room-only training room (you can see Highway to PowerShell playing on the screen on my laptop, if you look closely).