Microsoft Scripting Guy, Ed Wilson, is here. One of my favorite features in Windows PowerShell (since Windows PowerShell 3.0) is what I call the automatic Foreach. Basically, it means that I can access a particular property of a collection by direct access; and therefore, I avoid having to use a Foreach to enumerate through the collection.

Note  This is Part 4 of a four-part series about looping.

Today, I conclude the series by talking about the automatic Foreach feature.

What’s the problem with Foreach?

In the old days (Windows PowerShell 2.0 and Windows PowerShell 1.0), I had to use some sort of operation with Foreach. Now, maybe I don’t want to do that. So what can I do? A lot of times beginners would pipe the results to the Format-List cmdlet and get a list of names as shown in the following image: 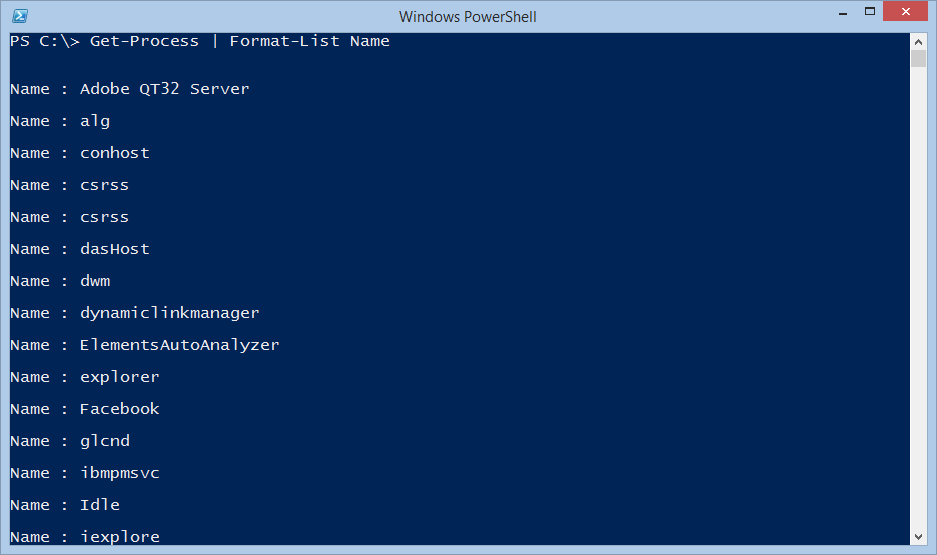 That output is OK, but I want only the name of the processes. So newbies then start trying to clean up the output, and it becomes a complicated mess. I know. I have seen it in real life.

Next up, after a little research, beginners decide to not use Format-List (or one of the other Format* cmdlets). Instead they use the Select-Object cmdlet. Here is the output: The output seems to be better, but there is still one little issue. When I redirect the output to a text file (maybe I need to use the list later), I discover a problem. It is not a big problem, and I can clean up things, but still it is a problem. The output is shown here: Piping the output to the Foreach-Object cmdlet is not horribly hard. In fact, I have done it so many times in my life, that it is nearly automatic. But it is a bit of typing. Here is the command again:

The command and output are shown here. This type of technique is great when it comes to things like Get-ADComputer where I can query to return a collection of computer objects, and then immediately access the name of said computers, and feed it directly to another command (such as Invoke-Command). It opens new doors in the efficiency of automation.

That is all there is to using the automatic Foreach. This also concludes my four-part series about looping. Join me tomorrow when I will have a guest post by Teresa Wilson, aka Scripting Wife.