Learn How to Create Custom Column Heads for PowerShell Out-GridView

Microsoft Scripting Guy, Ed Wilson, here. It is a typical weekend for me. I am up early, sipping a cup of English Breakfast tea, and watching a pot of Irish steel-cut oats simmer on the stove. I am glancing over several books, trying to decide upon which one I will spend the day with. I am leaning toward Shadow Divers, which is a book about a group of scuba divers in New Jersey.

I get up to stir the oats, and when I return to the table, I notice that I have a guest.

“Good morning,” I said cheerily. “What brings you out this early on a weekend morning?”

“Would you like a bowl of oats?” I pleasantly asked.

“Do I look like a horse?” she quizzed not really expecting an answer.

“You really are not a morning person are you?” I asked not expecting an answer either.

“You know me better than that,” she threatened.

I got up, and eased over to the stove. I stirred the oats for a few seconds.

“Still too soupy,” I said to myself.

“Would you like a cup of tea, my dear?” I offered.

“What makes you think I want to drink HOT tea?” she asked. “You can get me a Coke if you want to do something to make me happy.”

“Stop the presses,” she said with pretentious seriousness.

“It came to me yesterday, when I was working on the script to report large files,” I said.

“And,” she said slowly indicating interest.

“You need to know how to add custom column headings to an Out-GridView,” I said.

“I already know how to do that. I read your blog yesterday,” she stated flatly.

“All I need to do is to take the Get-FileSizes.ps1 script from yesterday, and add a pipe to the Out-Gridview cmdlet at the end of the script,” she announced.

“I am not certain because I have not done it before, but it should work,” she said with a little less confidence in her voice than she had previously exhibited. “You said to not be afraid to try things, so here goes.”

The Scripting Wife opened up the Get-FileSizes.ps1 script in the Windows PowerShell ISE. She went to the end of the script and added a pipeline character and the Out-GridView cmdlet. As shown in the following image, this did not work properly. 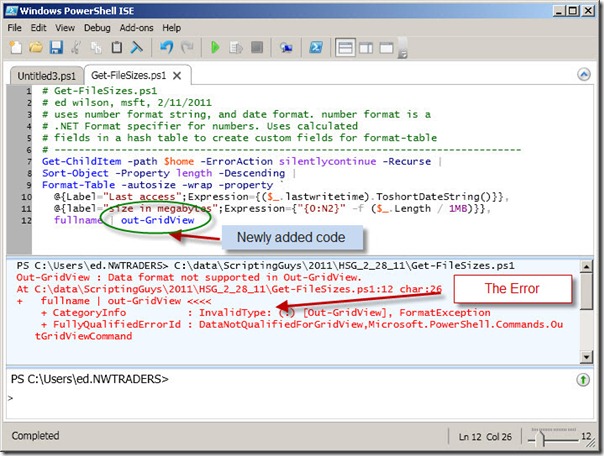 “Well it nearly worked,” she said in a sulky voice.

“You were definitely on the right track,” I said. “You are learning a lot.”

“Are you making fun of me?” she asked.

“No. Not at all. Yesterday, you saw in my blog that I talked about using a hash table to create custom column heads for the Format-Table cmdlet. You surmised that you could pipe that to Out-GridView and it would provide you with the custom column headings,” I stated. “It is perfectly logical.”

“If it is so right, then why is it producing errors?” she asked.

“You mean if it is so right, why is it so wrong?” I smiled. “That sounds like the name of a country-western song. The problem is that the Format-Table cmdlet changes the object, and it should be the last thing in a pipeline.”

“I see,” she said with a voice that stated she really did not see.

“So you are saying that all I need to do is to replace the Format-Table cmdlet with the Select-Object cmdlet, and it will work,” she said echoing disbelief.

The Scripting Wife copied the Get-FileSizes.ps1 script and pasted it into a new script. She then changed Format-Table to Select-Object. She also removed the AutoSize and Wrap switches that are used by the Format-Table cmdlet. The resulting code is shown here. 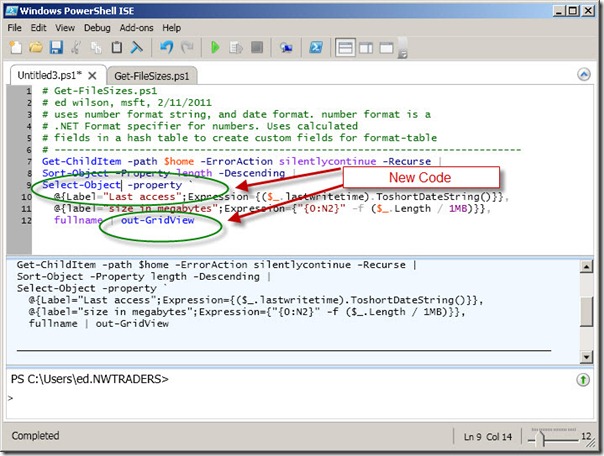 The Grid View output with the custom column headings is shown here. 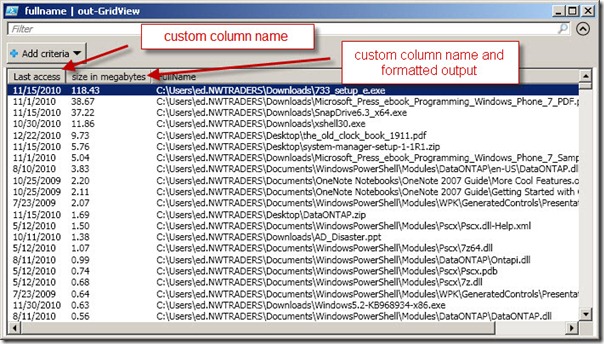 “Wow! That is cool,” she said. “But that also means I need to learn how to do hash tables better, don’t I?”

“Yes, I guess it does,” I said dreading the day I had to do that.

Without my noticing, she had slipped from the table, and spooned out my oats into a bowl. I looked up, nodded my thanks, and turned to the book I had selected for the day. As I glanced at the authors note, it began thus…“A few years ago, a friend told me a remarkable story. Two recreational scuba divers had recently discovered…” Ah yes, a sea epic. It should be fun.

Join me tomorrow as we continue to work our way through the 2011 Scripting Games Study Guide.