Learn Four Ways to Use PowerShell to Create Folders

Summary: Microsoft Scripting Guy, Ed Wilson, shows four ways to create folders with Windows PowerShell, and he discusses the merits of each approach.

Microsoft Scripting Guy, Ed Wilson, is here. This morning on Twitter, I saw a tweet that said “New-TimeSpan tells me that there are 41 days until the 2012 Scripting Games.” Indeed. Even though I have been busily working away on the Scripting Games, it seems awfully soon. I fired up Windows PowerShell and typed the following code:

Sure enough, the returned TimeSpan object tells me that there are indeed 41 days until the 2012 Scripting Games. I decided I would like a cleaner output, so I used one of my Top Ten Favorite Windows PowerShell Tricks: group and dot. The revised code is shown here.

Both of these commands and the associated output are shown in the image that follows. 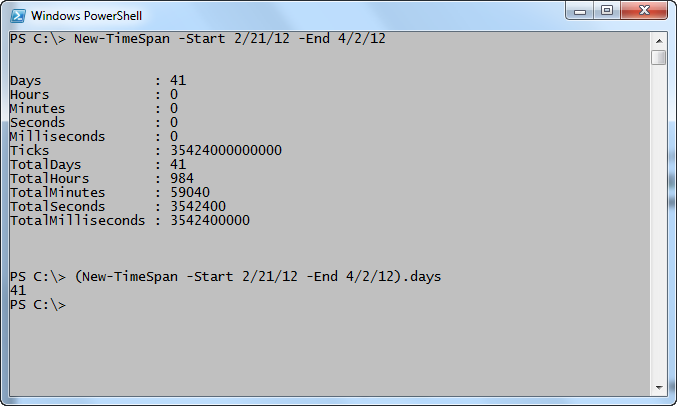 GW, you are correct, there are lots of ways to create directories, and I will show you four of them…

It is possible to use the Directory .NET Framework class from the system.io namespace. To use the Directory class to create a new folder, use the CreateDirectory static method and supply a path that points to the location where the new folder is to reside. This technique is shown here.

When the command runs, it returns a DirectoryInfo class. The command and its associated output are shown in the image that follows.

Another way to create a folder is to use the Scripting.FileSystemObject object from within Windows PowerShell. This is the same object that VBScript and other scripting languages use to work with the file system. It is extremely fast, and relatively easy to use. After it is created, Scripting.FilesystemObject exposes a CreateFolder method. The CreateFolder method accepts a string that represents the path to create the folder. An object returns, which contains the path and other information about the newly created folder. An example of using this object is shown here.

This command and its associated output are shown in the following image. GW, it is also possible to use native Windows PowerShell commands to create directories. There are actually two ways to do this in Windows PowerShell. The first way is to use the New-Item cmdlet. This technique is shown here.

Compare the output from this command with the output from the previous .NET command. The output is identical because the New-Item cmdlet and the [system.io.directory]::CreateDirectory command return a DirectoryInfo object. It is possible to shorten the New-Item command a bit by leaving out the Path parameter name, and only supplying the path as a string with the ItemType. This revised command is shown here.

Some might complain that in the old-fashioned command interpreter, cmd, it was easier to create a directory because all they needed to type was md––and typing md is certainly easier than typing New-Item blah blah blah anyday.

GW, that is all there is to creating folders. Join me tomorrow for more Windows PowerShell coolness.