Use PowerShell to Back Up Modified Files to the Network

Summary: Learn how to use Windows PowerShell to back up modified files to the network.

Hey, Scripting Guy! I have a folder that contains files in it, some of which I modify on a daily basis. I am wondering if I can use Windows PowerShell to back up only the modified files—those that have changed that particular day?

Two topics to be covered in the 2012 Scripting Games are working with files and working with folders. NG, your question happens to hit both topics. At its most basic level, backing up modified files from a folder involves the following two tasks:

By using Windows PowerShell, this first task is incredibly simple; in fact, it is a one-liner. The one-line command to search a folder named C:\data, and all of the folders contained inside that folder, for files that are written to today is shown here.

Just a few notes about this command:

A longer and more readable version of the previous command is shown here. 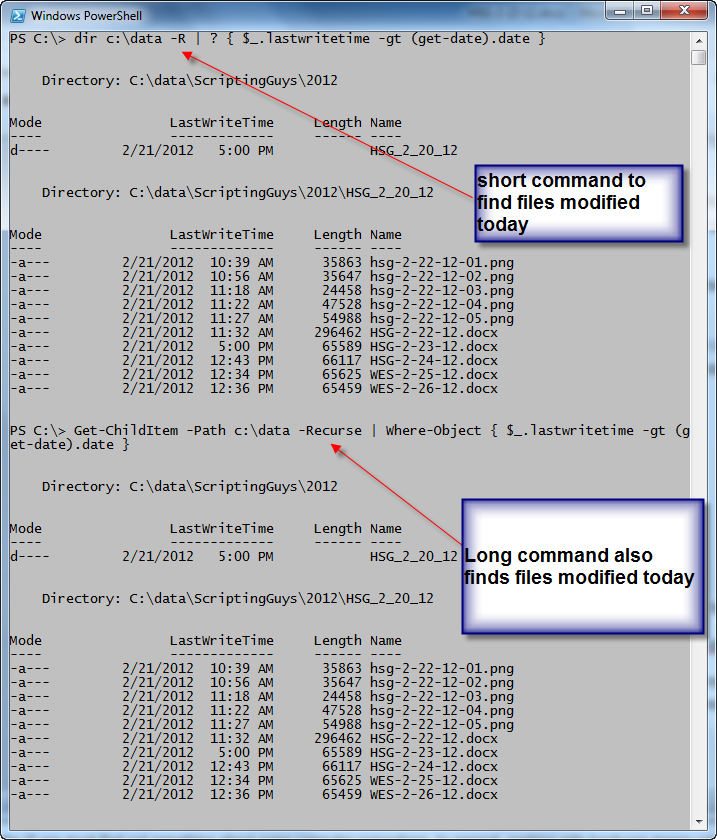 One problem with the two previous commands is that if a file inside of a directory reports modification, the folder also reports as changed. For this particular scenario, NG is only interested in modified files, not the actual folders containing the files. Therefore, a change to the Where clause needs to take place so that folders are filtered, but modified files remain. The first version (the short version of the command) is shown here with the necessary addition.

For ease of comparison, and to better illustrate the problem, the first command (returns folders and files) and the second command (returns only files) are shown in the figure that follows. 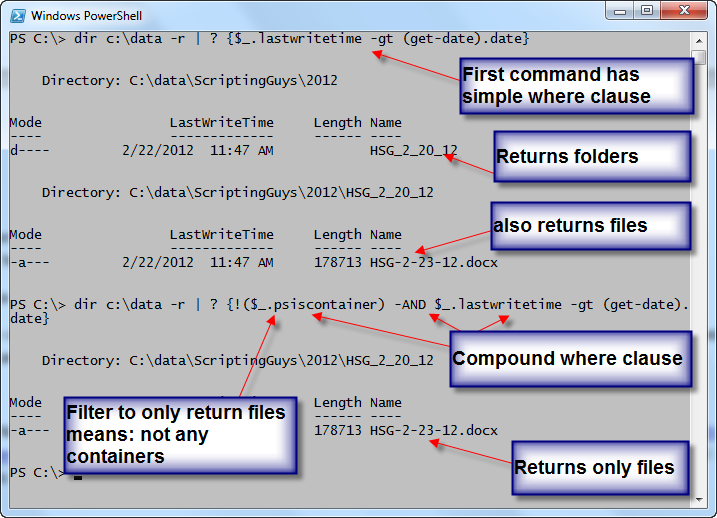 Copy modified files to the network

Unfortunately, the Copy-Item cmdlet is not smart enough to accept the objects that are returned by the Get-ChildItem cmdlet as direct input. It will accept strings that represent paths to files as pipelined input, but not the results from the Get-ChildItem. When I see that a command is unable to accept pipelined input in the way I want to provide it, it nearly always means that I can accomplish what I want to do by using the Foreach-Object cmdlet. The two parameters used by the Copy-Item cmdlet are the Path to the original file, and a path to the destination file. The Destination parameter only needs the path to the folder, and not the complete file to the actual file name. The % symbol is an alias for the Foreach-Object cmdlet.

If you decide that you would like to use the Windows Task Scheduler to schedule the previous command, see Use Scheduled Tasks to Run PowerShell Commands on Windows.