How to Use VBScript to Run a PowerShell Script

Summary: Microsoft Scripting Guy, Ed Wilson, shows you that it’s easier than you think to use VBScript to run a Windows PowerShell script.

Microsoft Scripting Guy, Ed Wilson, is here. Things are really heating up around here—and I am not just talking about the hot, humid weather down in Charlotte, North Carolina in the United States. First, I am busily getting ready for my trip to Seattle, Washington next week. I will be speaking about using Windows PowerShell 3.0 to manage the remote Windows 8 desktop to a bunch of Microsoft people from all over the world. The event (called TechReady 15) is like TechEd, only it is only for Microsoft employees. Nevertheless, in every other fashion, including the size and scope of the event, it is like TechEd. I really look forward to speaking at this event, because it is an honor to get to speak to so many smart people, and it is a great chance to see my friends from all over the world.

The second thing that is exciting are Windows 8 (which I have been running on my production machine for some time) and Office 15 (which I have just installed on my production machine). It is sooo cool, and is powerful, simple to use, and fun. Often powerful and simple do not go together in the computing world. This time, I think we did it right. The Scripting Wife is absolutely chomping at the bit to get a new slate device. I agreed to get her one for the holidays, but she wants it NOW!

The third thing that is super exciting is Windows PowerShell Saturday on September 15 at the Charlotte Microsoft office. We have just about finalized the schedule, and we have all the speakers lined up. It will be a super cool event. Keep watching, because we will be opening registration very soon, and expect it to sell out within days. We have to limit the attendance to 200 people, so you will want to ensure that you are watching for the announcement. The announcement of the opening of registration will take place on Twitter, then on Facebook on the Scripting Guys Facebook site, and then on the Scripting Guys blog, and finally on the Learn PowerShell page. So this would be a good time to get a twitter account and start following @ScriptingWife and @ScriptingGuys. By the way, I love the Rowi app on Windows 8.

When creating a permanent WMI event consumer that uses the ActiveScriptEventConsumer WMI class, you need to use VBScript as the script type. This is because ActiveScriptEventConsumer does not know how to run a Windows PowerShell script. This is not a huge problem, however, because writing a VBScript script to launch a Windows PowerShell script is very easy when you know the secrets.

Note   This is the third blog in a five part series about monitoring a folder for the creation of files that have leading spaces in the file names. On Monday, I wrote Use PowerShell to Detect and Fix Files with Leading Spaces, and the scripts from that blog will be used today and again on Friday. On Tuesday, I wrote Use PowerShell to Monitor for the Creation of New Files. This blog talks about creating a temporary WMI event to monitor for the creation of files in a particular folder. This query is crucial to Friday’s blog.

There are two methods available from the WshShell Object to launch other programs. These methods are the Exec method and the Run method. For my purpose, I use the Run method. It takes two lines of VBscript code; therefore, I use Notepad to create the script. Remember to save it as a .vbs file. The script is shown here.

The first line of code creates the WshShell object, and it stores the returned object in the objShell variable. This line is shown here. 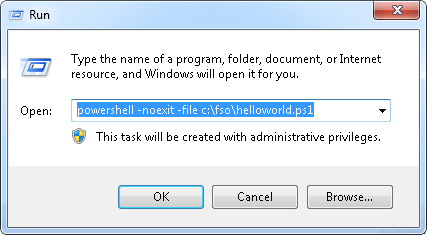 It is also possible to run a specific Windows PowerShell command or series of commands from the VBScript script. This technique is shown here.

Note   Keep in mind that you are writing in VBScript. Therefore, you need to escape the quotation marks with another pair of quotation marks. Also, remember that you use REM to comment out a line, and not the pound sign character (#) that is used in Windows PowerShell.

By using the New-FilesWithLeadingSpaces function from Monday, I create 10 new files with leading spaces in the names in a folder named test. These newly created folders are shown here. 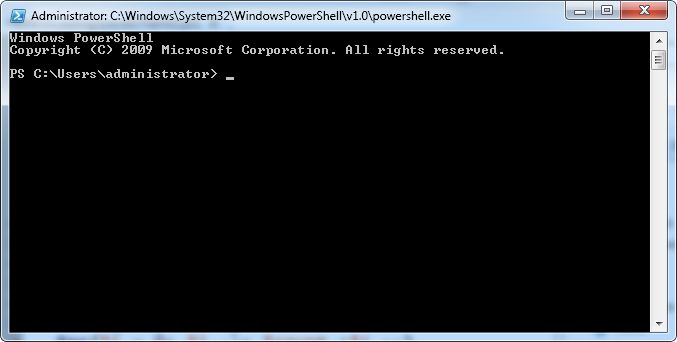 But when I go to the c:\test folder, I see that all the files are fixed. This is shown here.

That is all there is to using VBScript to run a Windows PowerShell script. WMI Event Monitoring Week will continue tomorrow when I will talk about using the WMI admin tools to monitor for newly arriving events.