Help! It Says PowerShell…Now What?

Hey, Scripting Guy! Help! I am reading through TechNet, and I found this command that seems like it will solve my problem, but I do not know how to do it. It says something about Windows PowerShell, but I do not know what that is, or how to run the command. I opened the command prompt, but all it did was give me errors. So where do I type the command?

Microsoft Scripting Guy, Ed Wilson, is here. One of the bad things about working at Microsoft, is that time sort of becomes skewed. By this, I mean that it is hard to remain in sync with the rest of the world. What am I talking about?

I pretty much assumed that everyone knows about Windows PowerShell, and has been using it for a long time—at least, that is my world. But Microsoft is not the rest of the world. I even talked to a person at Ignite, who said they were still running Windows 2000 on some of their servers.

When you have Windows PowerShell installed, you need to launch it. You can do this by simply typing PowerShell on the Windows 8.1 or Windows 8 Start screen. When you start to type, the Search dialog box appears automatically. In Windows 7, use the Start/Search command and type PowerShell.

I like to create a shortcut to Windows PowerShell and place it on my desktop. To do this, I right-click the desktop and choose New/Shortcut from the action menu, type PowerShell in the dialog box, and click next.

As an example, I can obtain a list of all the processes on my system. To do this, I use the Get-Process cmdlet. Cmdlets are Windows PowerShell commands that return information. I can simply type Get-Process (that is a hyphen in between the words Get and Process). By the way, I do not have to capitalize Get and Process, I can type get-process and the command works fine. Here is the command and the output: 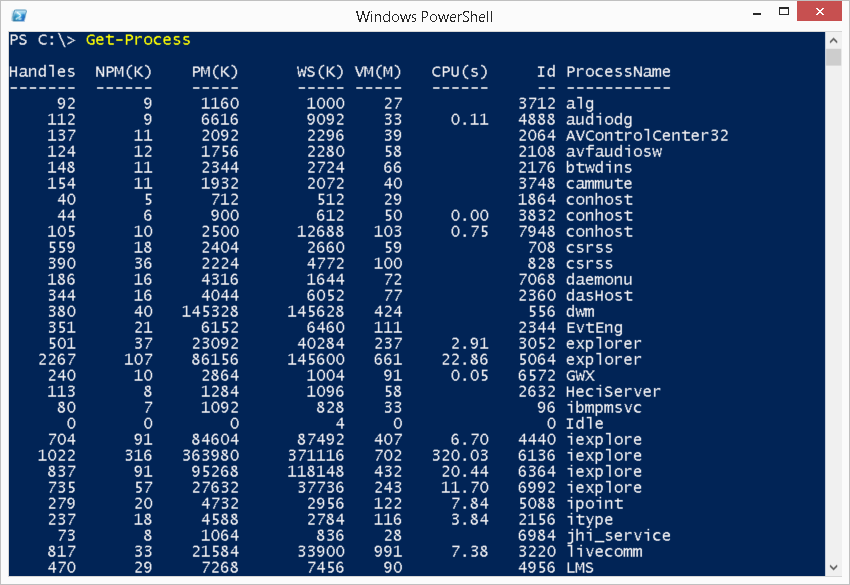 So if I went two command names too far, I would hold down the Shift key and hit the Tab key only twice.

If I am going to use a command and I do not know what it will do (such as Stop-Process), I can use the –WhatIf parameter. This will permit to see what would happen if I were to run the command for real. Or to think of it another way, “What would happen if I run this command?”

I can use the –WhatIf parameter for any Windows PowerShell cmdlet that will make a change to my system. This means the cmdlet will create something (New), change something (Set), delete something (Remove), or stop something (Stop).

For example, if I want to start a process, I would use the Start verb and the Process noun: Start-Process. Another good thing is that the cmdlets are (mostly) singular. So it is Process, not Processes, and it is Service, not Services.

Because starting a process will change the state of my computer (by starting a service), it means that I can use the –WhatIf cmdlet. Here is an example:

If I see a Windows PowerShell command in a TechNet article, and I am not sure what it will do, I take the following steps: 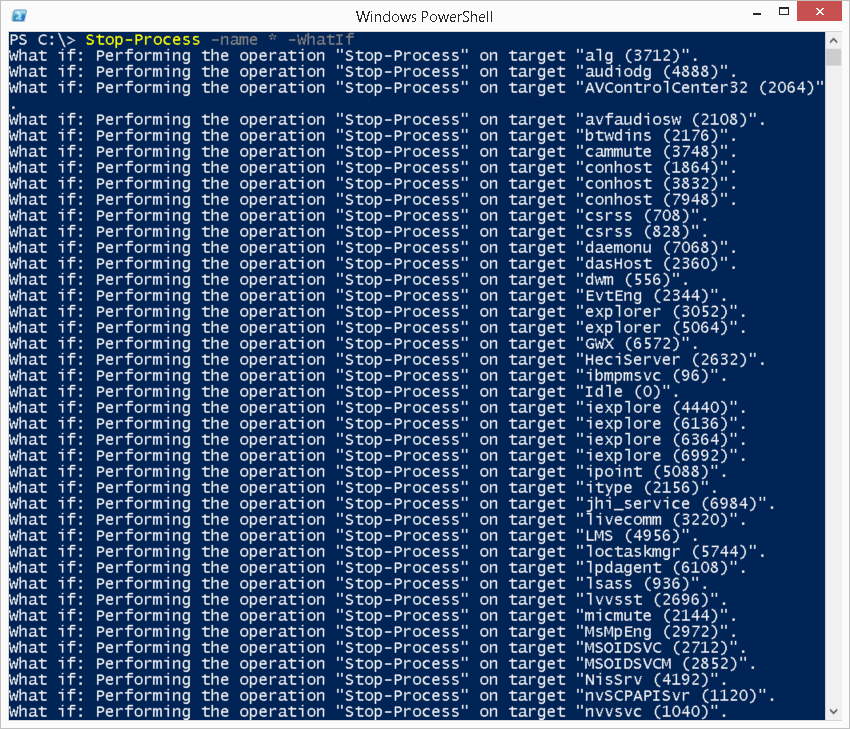 PowerTip: Convert to Decimals and Display Unicode Characters
Summary: Use Windows PowerShell to convert hexadecimal values to decimal and display Unicode characters.  I found a cool Unicode table on the Internet, but all of ...