Microsoft Scripting Guy, Ed Wilson, is here. Hey, it is nearly the weekend! This means we are one week closer to Windows PowerShell Saturday #007…

Note  Today I am concluding my series about working with network adapters.
You may want to refer to the earlier posts to catch up on the series:

Using Netsh to obtain network statistics is easy and powerful. For example, to show IP statistics, I use the following command:

A sample output from this command is shown in the image that follows: 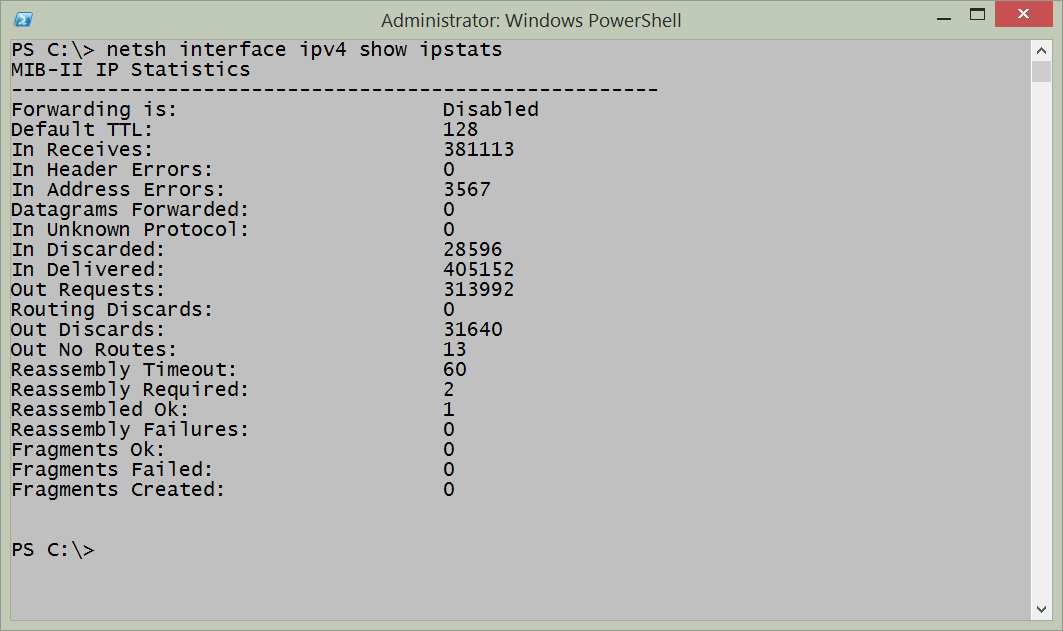 To use Netsh to show TCP statistics, I use the command shown here: 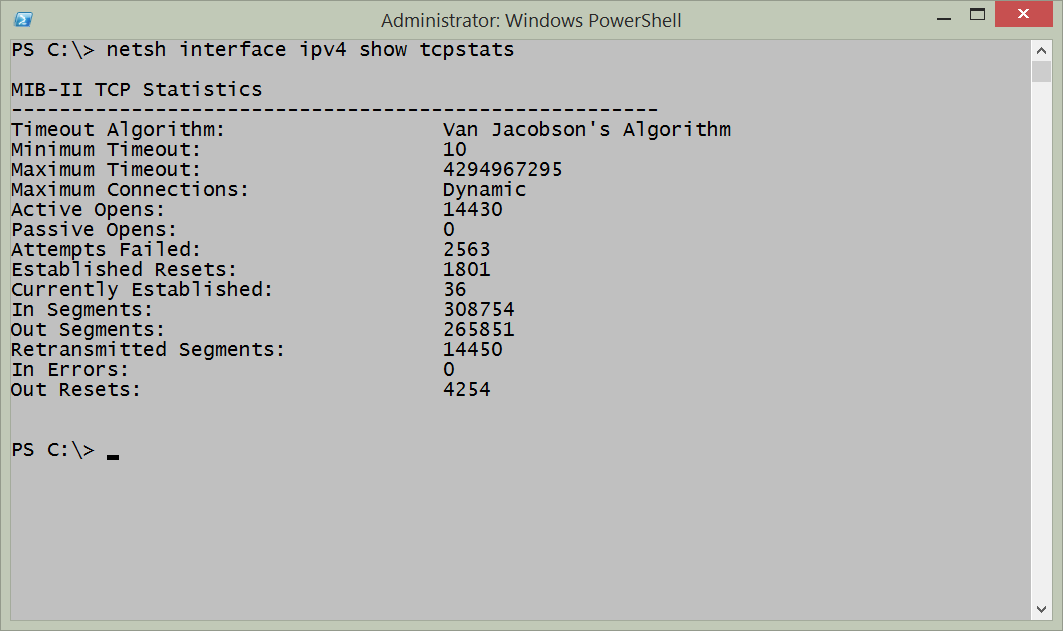 One of the cool things about using Netsh from within Windows PowerShell is that I have the power of Windows PowerShell at my fingertips. Rather than going back and forth to find stuff, I can pipe the results from a command to the Select-String cmdlet.

For example, if I am interested in how many commands are available to show statistics, I use the following command because I noticed that each of the commands contains the letters stats:

In addition to the IPV4 interface, I can also work with the IPV6 interface and obtain similar statistics. Here is the command that I used to obtain that information:

In addition to using the Select-String cmdlet to parse the output from the Netsh Help, I can use it to hone in on specific information from the statistics. For example, the following command retrieves IPv6 interface IP stats:

I can hone in on the output and look for errors by piping the results to the Select-String cmdlet and choosing errors. This command is shown here. 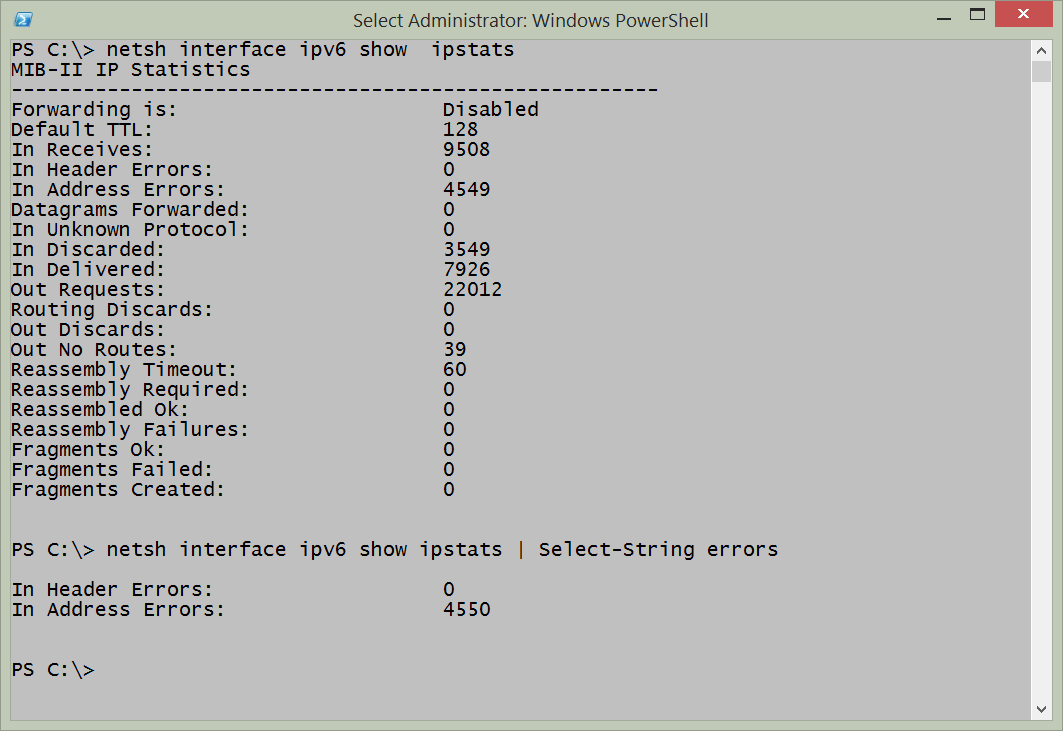 The NetStat command has been in the Windows world for a long time. It provides a quick snapshot of connections from local ports to remote ports in addition to the protocol and the state of those connections.

It takes a couple of minutes to run, and as a result, it makes sense to store the results of NetStat into a variable. I can then examine the information several times if I want to without having to wait to gather the information additional times. Here is an example of running the NetStat command and storing the results in a variable:

The command to run NetStat, store the results in a variable, and examine the contents of the $net variable are shown in the following image: 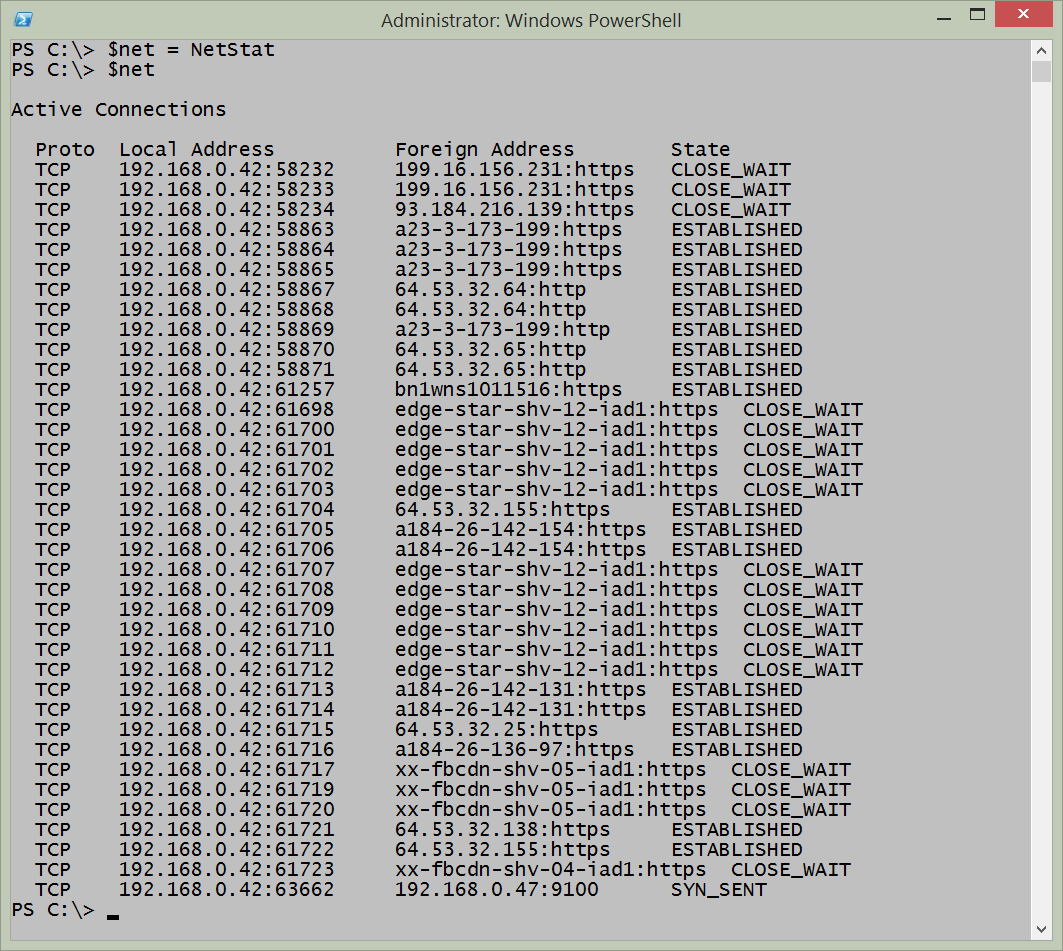 The real power, however, comes in using Windows PowerShell to parse the text output to find specific information. For example, the previous output shows multiple connections in various connected states. I can easily parse the output and find only the connections that are Established. The command I use is:

Interestingly enough, I can also use Netsh to report on TCP connections. The command is shown here:

The output from the command, as shown in the image that follows, is a bit different than that received from NetStat: 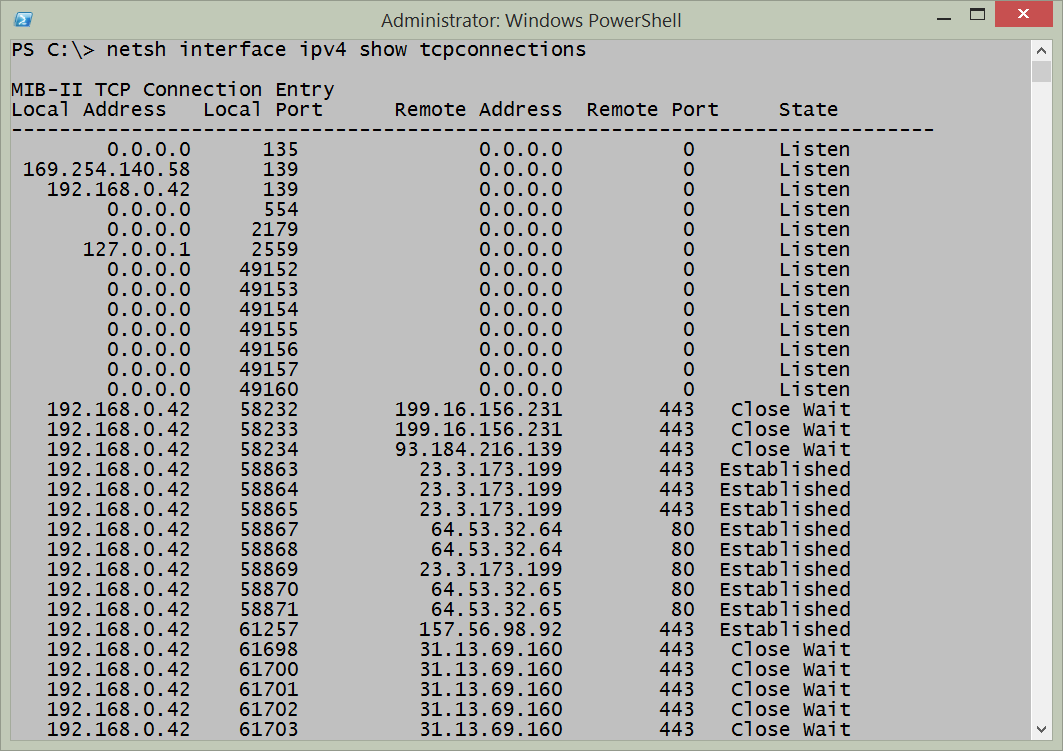 To easily collect performance counter information, I need to know the performance counter set names. To do this, I use the Get-Counter cmdlet, and I choose all of the ListSets. I then like to sort on the CounterSetName property, and then select only that property. The following command retrieves the available list sets:

If I pipe the output to the Out-GridView cmdlet, I can easily filter the list to find the list sets I want to use. This command is shown here:

The resulting Out-GridView pane makes it easy to filter for different values. For example, the image that follows filters for IP:

When I have the CounterSetName value that  want to query, it is a simple matter of plugging it into Get-Counter to first obtain the paths, as shown here:

Next, I use the paths with the Get-Counter cmdlet to retrieve a single instance of the IPv4 performance information: 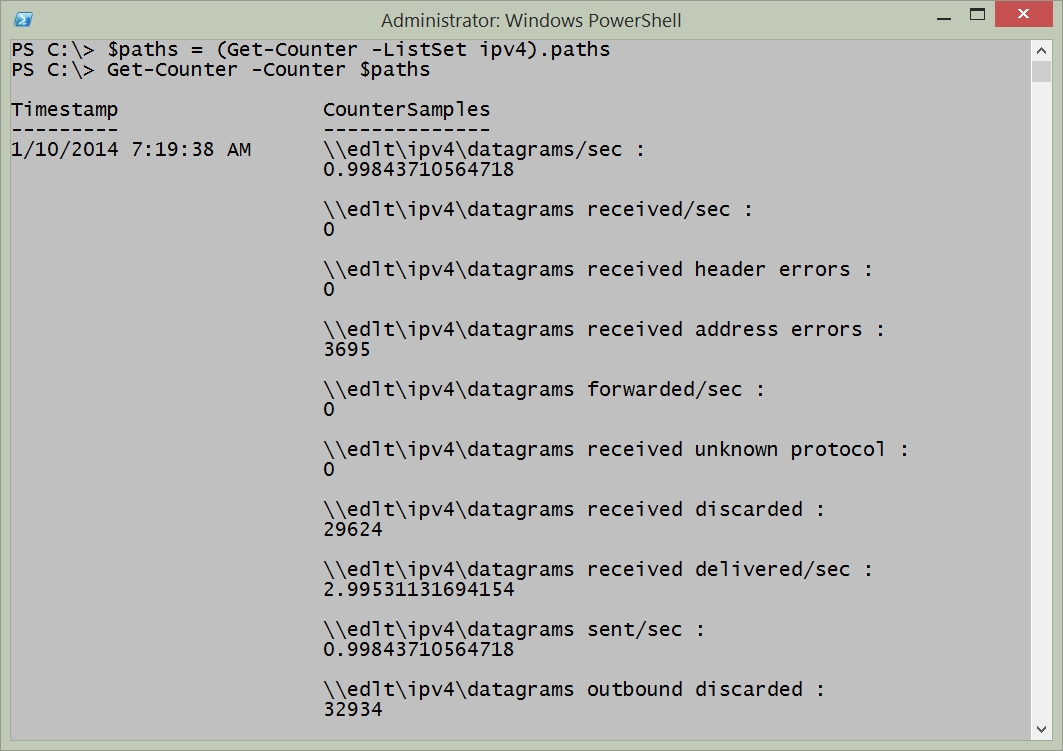 If I want to monitor a counter set for a period of time, I use the –SampleInterval property and the –MaxSamples parameter. In this way, I can specify how long I want the counter collection to run. An example of this technique is shown here:

If I want to monitor continuously, until I type Ctrl+C to break the command, I use the –Continuous parameter and the –SampleInterval parameter. An example of this command is shown here:

The easiest way to gather network adapter statistics is to use the Get-NetAdapterStatistics function from the NetAdapter module. It provides a quick overview of the sent and received packets. An example of the command is shown here:

The command and a sample output are shown in the image that follows:

If I want to work with a specific network adapter, I can use the name of the adapter; or for more flexibility, I can pipe the results from the Get-NetAdapter function. This technique is shown here:

The Get-NetAdapterStatistics function returns more than only the bytes sent and received. To find the additional information, I like to pipe the results to the Format-List cmdlet. An example of this technique is shown here:

The command,and the output associated with the command are shown in the following image: 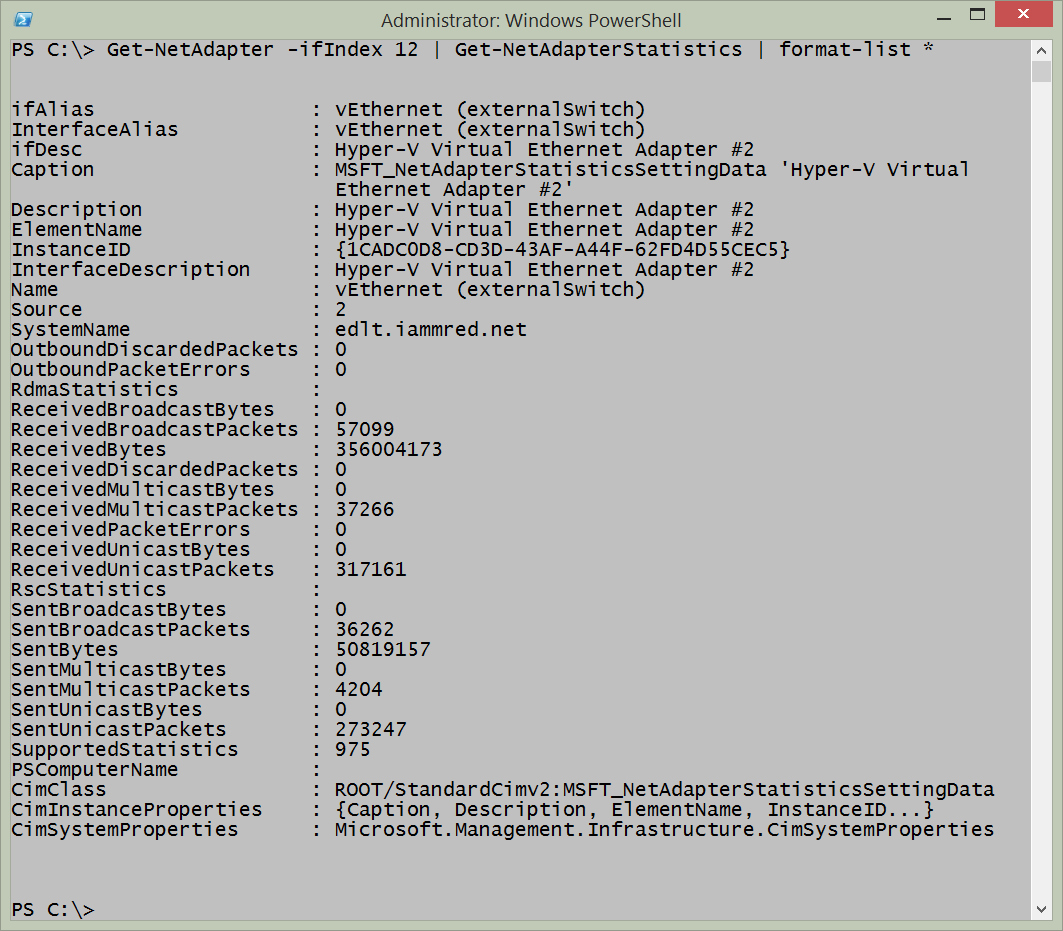 This concludes Network Adapter Week. Join me tomorrow when I will talk about mobile devices, Active Sync, and Exchange. It is cool stuff that you do not want to miss.