Note  PowerShell Saturday #007 will be held in Charlotte, North Carolina on February 8, 2014. This will be an awesome chance to meet and to learn from some of the best PowerShellers around. In fact, five of the speakers are also speakers at the PowerShell Summit this year. There are a limited number of tickets still available for this event, so you’ll want to sign up now. The Scripting Wife wrote a great post that provides a quick overview of the event: Psst…Charlotte PowerShell Saturday Details Leaked.

One of the great things about Windows Management Instrumentation (WMI) is the way that it can provide detailed information. The bad thing is that it requires a specialist level of knowledge and understanding to effectively use it and to understand the information. (Either that or a good search engine, such as BING, and an awesome repository of information, such as the Script Center.)

One of the cool things about Windows PowerShell, since version 1.0, is that it provides easier access to WMI information. The bad thing, of course, is that it is still wrestling with WMI, which some IT pros seem to hate (or at least dislike). The great thing about using raw WMI is that it provides compatibility with older versions of the operating system. For example, using raw WMI and Windows PowerShell would make it possible to talk to Windows XP, Windows 2003 Server, Windows 2008 Server, Windows Vista, Windows Server 2008 R2, and Windows 7, in addition to the modern operating systems of Windows 8.1, Windows 8, Windows Server 2012 R2, and Windows Server 2012.

So how do I do it? I used to be able to find our real network card by finding the one that was bound to TCP/IP. I would query the Win32_NetworkAdapterConfiguration WMI class, and filter on the IPEnabled property. Using this approach, I would have done something like this:

The problem with this methodology these days is that some of the pseudo adapters are also IP enabled. The previous command would eliminate many, but not necessarily all, of the adapters.

A better approach is to look at the Win32_NetworkAdapter class and query the NetConnectionStatus property. By using this technique, I return only network adapter devices that are actually connected to a network. Although it is possible that a pseudo adapter could sneak in under the wire, the likelihood is more remote. In this command, I will use the Get-WmiObject Windows PowerShell cmdlet to return all instances of Win32_NetworkAdapter class on the computer. I then create a table to display the data returned by the NetConnectionStatus property.

The fruit of our labor is somewhat impressive. I have a nice table that details all of the fake and real network adapters on our laptop, and the connection status of each. Here is the list from my laptop:

There are two things you will no doubt notice. The first is that most of the network adapters report no status what-so-ever. The second thing you will notice is that the ones that do report a status do so in some kind of code. The previous table is therefore pretty much useless! But it does look nice.

A little work in the Windows SDK looking up the Win32_NetworkAdapter WMI class, and I run across the following information:

The value of 2 means the network adapter is connected. Here is the command I wrote to exploit the results of our research.

Such ecstasy is short lived, however, when I realize that although I have indeed returned information about a network adapter that is connected, I do not have any of the configuration information from the card.

In VBScript, querying an association class involved performing confusing AssociatorsOf queries. (Refer to the MSPress book, Window Scripting with WMI: Self Paced Learning Guide for more information about this technique.)

By using the association class with Windows PowerShell, I come up with the FilterAssociatedNetworkAdapters.ps1 script shown here:

I begin the script by using a command-line parameter to allow us to run the script remotely, if needed. I use the Param statement to do this. I also create a function named funline that is used to underline the results of the query. It makes the output nicer if there is a large amount of data returned.

I print out the name of the computer by using the Write-Host cmdlet as shown here. I use the color cyan so the text will show up nicely on the screen…unless of course your background is also cyan. Then the output will be written in invisible ink. That might also be cool.

Then I get down to actual WMI query. To do this, I use the Get-WmiObject cmdlet. I use the –computername parameter to allow the script to run against other computers, and I pipe the results to the ForEach-Object cmdlet.

I need a way to look at the netConnectionStatus property of the Win32_NetworkAdapter class. This class is referred to by the reference returned from the association query. It is called element. To gain access to this class, I use the reference that was returned and feed it to the [WMI] type accelerator (it likes to receive a path, and this is what the reference is).

Because the reference refers to a specific instance of a WMI class, and because the [WMI] type accelerator can query a specific instance of a class, I am now able to obtain the value of the netConnectionStatus property. So I say in our script, if it is equal to 2, I will print the name of the network adapter, the configuration that is held in the setting property, and the adapter information that is held in the element property. This section of the script is shown here:

Microsoft created NetSh in 2000, and it has been a staple of networking ever since. When I open it these days, it displays a message that says it might be removed in future versions of Windows, and therefore, I should begin using Windows PowerShell. Here is the message:

Now, because NetSh is an old style menu type application, it is possible to enter NetSh, and walk my way down through the menus until I arrive at the proper location. Along the way, if I get lost, I can use the ? to obtain Help.

The problem is that the Help is quite often not very helpful; therefore, at times it takes me nearly a dozen times before the command is correct. The great thing is that, for the most part, when I figure out a command, I can actually keep track of my location in the program, back out all the way, and enter the command as a one-liner. Here is the NetSh command to display network interface information that is bound to IPV4:

The Get-NetAdapter cmdlet returns the name, interface description, index number, and status of all network adapters present on the system. This is the default display of information, and it is shown in the following image:

The command and output associated with the command are shown in the image that follows. 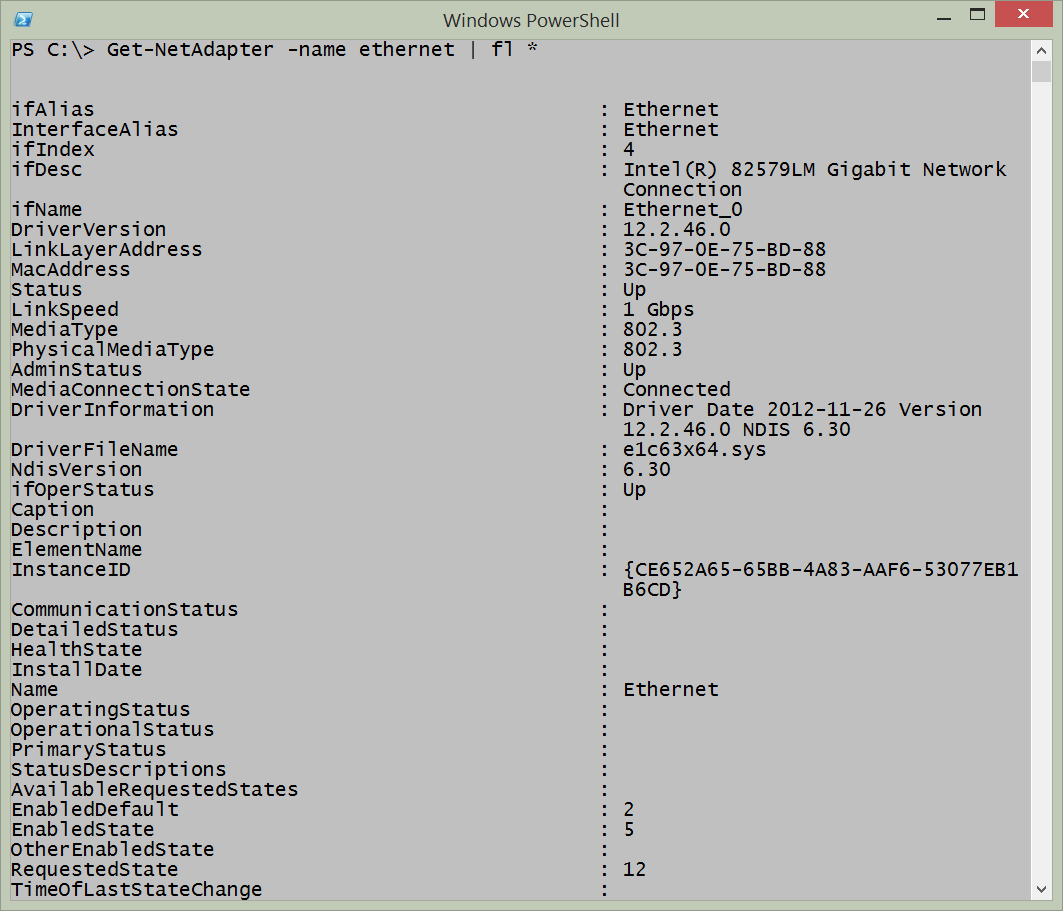 There are a number of excellent properties that might bear further investigation. For example, there are the AdminStatus and the MediaConnectionStatus properties. The following command returns these properties:

Of course, there are also other properties that might be interesting. These properties are shown here, along with their associated output (this is a single logical command broken on two lines):

I decide to look only for network adapters that are in the admin status of Up:

To find the disabled network adapters, I change AdminStatus from Up to Down, as shown here:

I go back to my previous command, and modify it to return Wi-Fi information. This command and associated output are shown here (this is a single logical command):

If I want to find any network adapters sniffing the network, I look for PromiscousMode. This command is shown here:

When I combine the Get-NetAdapter function with the Get-NetAdapterBinding function, I can easily find out which protocols are bound to which network adapter. As shown in the following command, I send the results to Where-Object and check to see if the enabled property is equal to True: If I want to find which network adapters have the Client for Microsoft Networks bound, I need to first see which protocols are enabled (using the syntax from the previous command), and I need to see which one of the enabled protocols have the display name of Client for Microsoft Networks. This requires a compound Where-Object statement. Therefore, I cannot use the simplified syntax. Also, because only one of the protocols begins with Client, I can use that to shorten my query just a bit. Here is the command I use (this is a one-line command that I broke at the pipe character to make a better display):

The command and associated output are shown in the following image:

Join me tomorrow when I will continue Network Adapter Week by talking about enabling and disabling network adapters.