Microsoft Scripting Guy, Ed Wilson, is here. Today we have the first of a two-part series about using Windows PowerShell to determine if a reboot is pending. Brian Wilhite, the writer, is no stranger to readers of the Hey, Scripting Guy! Blog—he has written several posts.

Take it away Brian…

So what’s the problem?

A few months ago one of my coworkers asked if we could determine the pending reboot status of servers in our environment. This is important to know because you will not be able to install updates if the system is pending a reboot from a previous software update. Windows PowerShell is “the” go-to platform to accomplish any task in the Microsoft universe, so I focused my efforts there.

The journey to a solution starts by researching all the avenues a pending reboot is documenting on a system. Furthermore, to be as accurate as possible, I wanted to validate my research by whatever means necessary. After I validate my research, I want to develop reusable code in the form of a function to share with my coworkers and others in the community that may have a similar need. So the birth of Get-PendingReboot began, and you can find it in the TechNet Script Center Repository.

The research and validation expedition

The landscape of our environment, like most, is a mixture of Windows versions ranging from Windows Server  2003 to Windows Server 2012. After searching the web and receiving community feedback, I have compiled several methods that are used to determine a system’s pending reboot status. The methods are (including links for reference):

At this point, my curiosity was piqued, and I wanted to ensure these locations were indeed accurate. I turned to Process Monitor to validate my research. I staged an unpatched computer running Windows Server 2003 with SP2, and I captured events as Windows Update was running and installing updates. 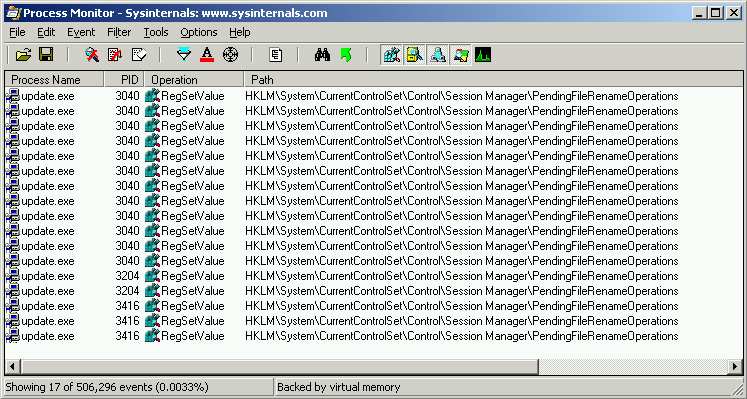 I filtered based on RegSetValue because this was the operation that actually wrote the value to the registry. Here are the values for this particular round of patching: 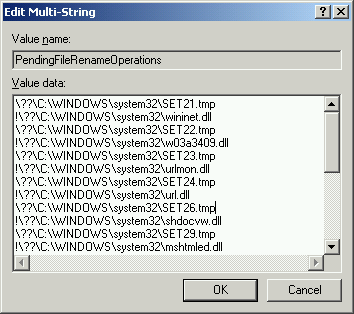 An item worthy of note…

In PendingFileRenameOperations, the first item in the first pair, “SET21.tmp” is renamed to “wininet.dll” when the server reboots. As you can see, the first line in the pair is the source file and the second line is the destination name. Stated another way, it is moving the file to rename it when the computer reboots, even if the destination file exists. From time-to-time, you'll also observe a pair with a value present in the first line and a blank line immediately afterward. This indicates that the file will be deleted when the computer reboots. When the system performs the Rename and Delete action, the PendingFileRenameOperations REG_MULTI_SZ value is cleared.

Next, I performed the same process for HKLM\SOFTWARE\Microsoft\Windows\CurrentVersion\WindowsUpdate\Auto Update:

In this screenshot, the RegCreateKey operation is called to create the RebootRequired registry key, which signifies that a reboot is required.

Next, I captured events on a computer running Windows Server 2008 R2 while it was installing a security update that required a reboot. Notice the HKLM\Software\Microsoft\Windows\CurrentVersion\Component Based Servicing\RebootPending key. This key will only exist if the system is pending a reboot. The following image illustrates what occurred with the RebootPending key during the security update installation.

Again, you’ll notice that the RegCreateKey operation calls for the RebootPending key.

For the fourth method to work, System Center Configuration Manager 2012 must be installed on the client. When it’s installed, the ‘ROOT\ccm\ClientSDK’ WMI class will be available. This class has a method called DetermineIfRebootPending. The method name is a dead give-away as to what it does. The following screenshot illustrates what’s returned when calling the method on a client running System Center Configuration Manager 2012. In my example, notice that the method was called, and it returned a False for RebootPending. We’ll get to the Windows PowerShell code that’s used to call this method in my next post. 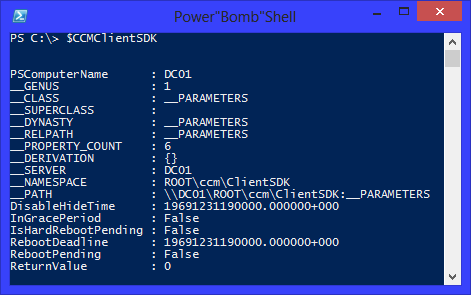 Awesome job, Brian. Way to go, and thanks for contributing to the Windows PowerShell community. Join me tomorrow when Brian will complete his awesome script.