Understanding how to port your ASP.NET web apps to ASP.NET Core

In this post, App Dev Manager Mike Finley explains the factors when migrating an ASP.NET Web App to ASP.NET Core.

There are several reasons that developers and architects may consider moving to ASP.NET Core. Here are a few of the primary design requirements that you may want to consider for an application being upgraded:

There are 3 fundamental areas of review in the upgrade process when moving from ASP.NET to ASP.NET Core. (The following details relate to upgrading web applications using MVC and Entity Framework) 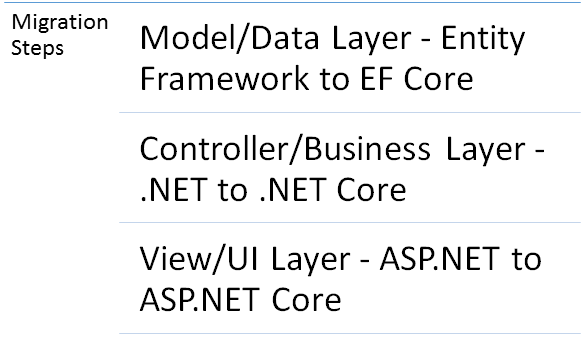 Consider using EF Core for a new application if both of the following conditions are true:

Consider using EF6 if both of the following conditions are true:

If you want to move to EF Core to use new features, make sure you’re aware of its limitations. However, EF Core works well with legacy .NET Framework apps. The app doesn’t need to be Core to run EF Core. There are many reasons to move to EF Core, but the primary one is that EF Core is significantly more performant that EF 6. For more information, see Porting from EF6 to EF Core. The move from EF6 to EF Core is straightforward and more a port than an upgrade.

Make sure that EF Core has all the features you need to use in your application. See the feature comparison table (reference below) for a detailed comparison of how the feature set in EF Core compares to EF6. If any required features are missing, ensure that you can compensate for the lack of these features before porting to EF Core

Using EF Core and EF6 in the Same Application

Both .NET and .NET Core share many of the same components and you can share code across the two. However, there are fundamental differences between the two and your choice depends on what you want to accomplish.

Use .NET Core for your server application when:

Use .NET Framework for your server application when:

There are a few tools and processes that can be used to make the conversion from .NET to .NET Core for Controller or Business layer components go a bit smoother. For more details see references below. Moving from ASP.NET to ASP.NET Core is more of a port than migration. Some of the notable changes within ASP.NET Core are as follows:

The process of migrating from ASP.NET to ASP.NET Core is doable but not without some heavy lifting and understanding the complexities of the differences in the new programming model. I do believe the change is worth the time if you are looking at moving to the cloud and want to use Azure WebApps, containers or LINUX OS as your host.

Overview of the porting process from .NET Framework to .NET Core

Choosing between .NET Core and .NET Framework for server app

Migrate from ASP.NET to ASP.NET Core

Let us help you get started with your Web Application Migration efforts.

Collecting and Analyzing Dumps with .Net Core on Linux
In this post, App Dev Manager Andrew Kanieski discuss options for collecting and analyzing dump files of your .NET Core apps running on Linux.

Developer S
January 21, 2020
0 comment
Using Azure Cognitive Services Text Analytics API Version 3 Preview for Sentiment Analysis
In this blog, I will demonstrate how Text Analytics API Version 3 Preview of the Microsoft Azure Cognitive Services can be used to analyze large unstructured data. This analysis aims to understand the sentiments expressed in a solicited public comment process and determines the degree of the positivity or negativity of the comments.