In this post, Senior Application Development Manager, Sash Kavalaparambil introduces .NET Core and many of the features that make it a powerhouse for cross platform development scenarios.

It has been over 16 years since the first version of .NET framework has been released. In spite of its wide adoption among developer community, todays cloud first mobile first world demands lightweight, cross platform technologies for building applications. The .NET Core is the evolution of Microsoft’s .NET technology into a modular, cross platform, open source and cloud ready platform, which runs on Windows, Mac, Android, IoT and Linux. The lightweight .NET Core framework provides much faster performance over some of the competing technologies, notably Node.js and GO. 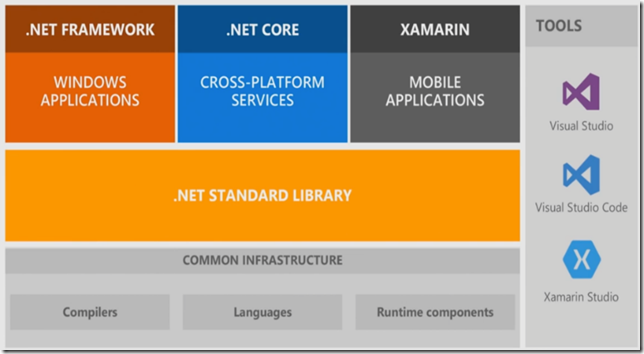 There are similarities and differences between .NET Core and .NET platform. Both implements .NET Standard Library and supports ASP.Net Core and EF core. The .NET framework will continue to be the platform for developing applications for Windows. In fact, you can have .NET Framework and .NET Core code live harmoniously together in the same solution such as a WinForms application consumes services written on .NET Core.

The following list highlights the features of the .NET Core platform.

Command Line Interface: The .NET Core command-line interface (CLI) is a new foundational cross-platform tool for developing .NET Core applications. This foundational layer can be used to create higher-level tools and IDE’s. CLI provides the same functionality in all supported platforms to provide a uniform experience.

Visual Studio 2017: The .NET Core tools are integrated into Visual Studio 2017 for Windows and Mac versions. Visual Studio 2017 provides many built in templates for creating supported application models including ASP.Net Core, class libraries, UWA and console apps. ASP.Net core template also gives an option to select .NET Core framework 1.0 or 1.1. When you open a .NET Core project created with older version in Visual studio, (ie projects with project.json) it automatically detects the change and offers a one-way migration to newer .csproj based structure.

.NET Core supports container technologies and works well with Docker images. Three Docker image variants are readily available from DockerHub. The developer image is ideal for fast iterations through code changes and to debug the changes. Build image is meant to be used in continuous integration/ build environments including compiler and any other dependencies to optimize the binaries. Production image is a small image for fast deployment and startup time. Visual studio has integrated support for Docker where users can right click a project and add Docker support.

The .NET Core is the future of Microsoft’s .NET platform and adoption of this technology can help you in creating cloud ready, cross platform applications. General guidance for new applications development is to use .NET Core, if the application model exists. For existing applications, .NET Portability Analyzer tool will come handy to determine the portability of assemblies to the target platform and will help with the go or no-go decision on migration.

Premier Support for Developers provides strategic technology guidance, critical support coverage, and a range of essential services to help teams optimize development lifecycles and improve software quality.  Contact your Application Development Manager (ADM) or email us to learn more about what we can do for you..NET Core roadmap: https://blogs.msdn.microsoft.com/dotnet/2016/07/15/net-core-roadmap/

Documentation in a DevOps World
In this post, Application Development Manager, Chris Mason discusses the challenge of keeping documentation up to date in this fast moving DevOps world.  In addition, he...