I started to build a solution based on the Microsoft’s recommended architecture on Modern Data Warehouse. It is going well, and most likely will be a topic for another blog post very soon.

In the early stages of this project, while building some transformation and analytics Python scripts in Databricks, I asked myself if I could build some custom python libraries and store them as private artifacts in the Azure DevOps Org for my organization. And then (this part is still uncertain) install them directly in a Databricks cluster.

So, I set out to try to solve at least the first part of this issue: creating and managing Python packages in Azure DevOps. And here it goes.

“A requirement of this self-imposed challenge is to build 100% of it in a Windows environment with tools used by Microsoft developers. This is a tough one. Python developers, with all their tools and documentation, perform much better in a Linux-based environment. But for the sake of this exercise, I went with a Windows-only setup. Let see how far I get!”

Setting up the Azure DevOps environment for the packages

Let’s get started and partially setup out Azure DevOps CI/CD. We will come back to it later to complete it. But for now, we need the git repo to be setup and configured.

– Go ahead and create a project for your Python packages. If the packages will be part of a larger project, than go ahead and select that project and head to the Repos section.

– In the Repos section, create a new git repo and enter these basic items. Namely, a repo name (in my case: py-packages) and a .gitignore file prefilled with Python-type entries. 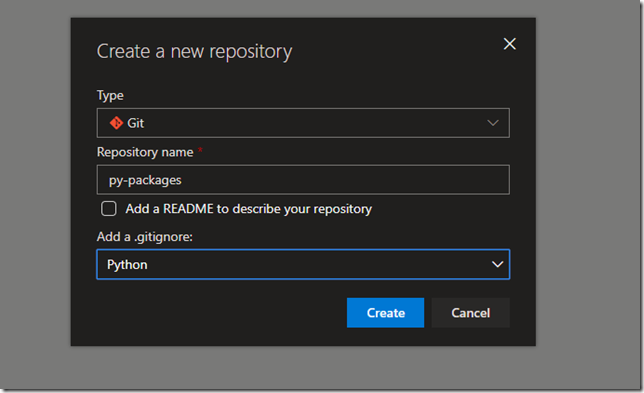 in top-right of the screen, and go for

– Clone the repo in a local folder. Your VS 2017 clone repo window should look like this:

– Chose the path carefully. Later we will talk about creating Python virtual environments, which will need their paths as well. In my local environment, these are created as follows:

– Once the Python development tools are created, go ahead and restart VS 2017 and create a Python application: File -> New -> Project -> Python Application. Note that “Create directory for solution” and “Create new Git repository” are unchecked. And, obviously, we are creating the app inside the folder we created when we cloned the repo from Azure DevOps. – A bit of optional housekeeping here.

Setting up the python (local) environment for the packages

I would say that, when working with Python, having a Python virtual environment is a must. This helps in creating multiple environments, of different versions, for different application, which you can destroy when you are done with your development.

Otherwise, your local environment will become bloated with libraries and customizations and very soon will start creating problems for you. Also, you will not remember which library was installed and used for which application, so this is a very useful feature.

Here is a step by step guide for this part:

In the search books, search for and install the following packages:

I will explain their usage throughout the text to follow.

The virtual environment has the packages it needs, and looks like this: As you can see the simplicity and flexibility of the whole process is phenomenal!

So, let’s go ahead and create a new package.

In solution explorer, right-click in the PythonPackage app; select Add; select New Item; and in the selection of items chose Python Package.

As you can see, the python package is just a folder with a __init__.py file in it. Select the mdw package; right click; select Add; select New Item and add a new Python package. Chose a name (no spaces) and short (in my case: databricks, as I intend to place some databricks related functionality in it).

Now you have a subpackage. Its functionality can be retrieved as mdw.databricks.<function>. You can write you functions directly in the __init__.py file. However, I prefer to write them in separate files and group them by functionality. At this time, I will add some databricks functionality that will help me with its configuration.

Go ahead and create a new .py file under the databricks folder and call it databricks_config.py.

In the __init__.py add the following line of code: from .databricks_config import *

In the databricks_config.py file add the following:

We have now, a package; a subpackage; and a useless function that doesn’t do anything useful except return the string “Hello world!”

Before we start compiling this package and deploy it as a package, we should write some unit tests. This way we will now that the functions we write are working. Note that Python is an interpreted language, if we make any errors, we will only catch them when we use it. You should write tests for every function you write and run the tests before any new version of your package. It is the best way to make sure you are not packaging code that doesn’t work.

At the package level (mdw), add a new folder called tests. In that folder add an empty __init__.py file.

In the tests folder, add a python file called, test_ databricks_config.py. Note: it is very important to prefix all your test files with “test_”, it will be used by the CI framework to identify the unit test files it needs to run.

Inside the test_ databricks_config.py file add the following:

This section of code does very little in terms of testing. It adds a reference to the pytest library that handles unit testing framework; it imports the subpackage, with the functionality we want; it calls the function and it inspects that the return value is o the type we want. For now, that is all we need.

Now let’s run the tests. Switch to Python Environment tab (next to Solution Explorer), and click in Open in Powershell.

In the powershell window type: python -m pytest ..\..\apps\py-packages\mdw\tests. If you follow the file structure as described in this article this command will find the tests folder where the tests are for the mdw package and will run them all.

In our case, there is only 1 test, and that runs successfully. Add tests as you add functionality to the package.

Getting the Python package ready to be deployed

There are a few additional files we will need to add. At the root (application level) add the following files: The final file structure of the project looks now like this: Let’s head now to Azure DevOps and create the Build& Release pipeline for this package, as well as the Artifacts feed where we will serve this package from.

Let’s start with the build.

Go to Azure DevOps, where we created our git repo for this package, and then Pipelines -> Builds -> New -> New build pipeline.

Select the code repo of the package as source and click Continue.

Search into the templates for Python Package and click Apply. There will be quite some settings to go through.

In the Triggers tab, make sure the Enable Continuous Integration is checked.

In the Variables section make sure python.version includes 3.6. You may want to remove any version this package is not compatible with or is not tested against. Let’s keep only 3.6, 3.7 for now.

Back in the Tasks page, chose a name for the build (avoid spaces in the name; they are always trouble), and in Agent Pool, choose Hosted Ubuntu 1604.

In the Build & Test section:

In the Publish section:

As a last step, go to the .gitignore file and add the following:

For some reason the .gitignore that gets generated by Azure DevOps does not add these lines, which generate some unnecessary files.

At this time, make the first check in of the code, and see the Build automatically start and go through all the steps. Troubleshoot any of the steps that may fail. If it succeeds, you can check the Tests tab to see the published version of all your tests results and click in the Artifacts button for the build to see what has the build produced and published. You will see the .pypirc file and another file with the extension *.whl. This is our package. Now let’s skip a step and go and create the feed we will be publishing our packages from. It is a straight forward process. Go to the Artifacts section of the project; click New feed; chose a worthy name and click Create. Here is how the screen should look: In the following screen click in the Connect to feed button. And make the Python choice. In the 2nd text section Upload packages with twine, click in the Generate Python credentials. Copy the text that is generated, and go ahead and add it to the .pypirc file in your local repo. Don’t check in the latest changes just yet.

Let’s go to the Pipelines -> Releases section and create a new Release definition. When the Templates list appears, chose Start with an empty job. There is no template for what we will do. But is a rather simple task!

In the Variables tab, go ahead and add a variable python.version and set it at: 3.6.5

And let’s go to the Task tab and add some tasks:

This is the end of the process. What is left is to upgrade the version, to make it one increment higher (will need to do this every time you want to publish a new package). The .pypirc file has the address to our feed to where to send the package.

Check in the updated version and .pypirc and sync the repo with Azure DevOps. Watch the build compete and the release kick in and publish our package to the feed. Troubleshoot any issues an misconfiguration.

You have now a Python package you can distribute to anyone within your organization.

What I wanted to accomplish here was simply to create a redistributable Python package. Also show some of the practices on how to work with Python in a Windows environment.

But I could not stop there.

I went ahead and built a complete CI/CD pipeline for the package, showing how easy it is and how well Python projects integrate with Azure DevOps.

Last, with Artifacts in Azure DevOps, you have a publishing hub for all such packages, being nuget, Python, Maven, npm, Gradle, or universal.

I hope you find this helpful. You can find the project source here.

Cross (micro) services authentication with Azure B2C
Microservices is an architectural style that structures an application as a collection of loosely coupled services, which implement business capabilities. The microservice architecture enables the continuous delivery/deployment of large, complex applications. It also enables an organization to evolve its technology stack.