As part of an organization’s automated Release pipeline, it is important to include security scans and report on the results of these scans. One tool used in the industry is the OWASP Zed Attack Proxy (ZAP). In this blog, we will integrate OWASP ZAP within a Release pipeline, leveraging Azure Container Instances, and publish these results to Azure DevOps Test Runs.

As this work is based on a PoC for a Premier Developer customer, this solution presented operates within certain assumptions.

Based on the above assumptions, there were a few issues and limitations to overcome:

The Release Pipeline itself is fairly simple. In our example, we will have one Artifact, which is an Azure Git artifact containing only the XSLTemplate used to transform the results file for publishing. 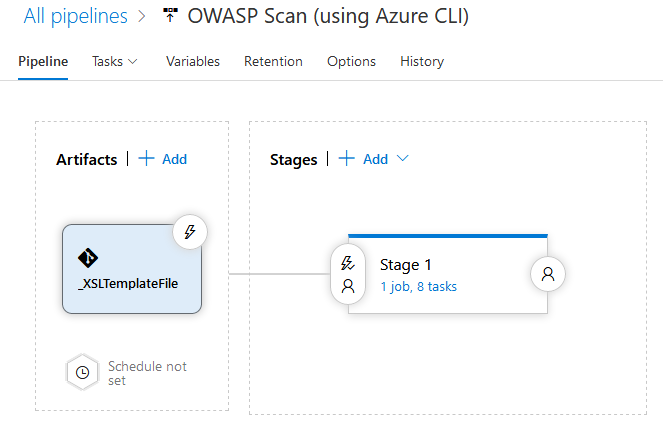 We have several Variables set on the Pipeline:

Once the application portion of the Release pipeline has been configured, the security scan portion can be defined. In our example, this consists of 8 tasks, primarily using the Azure CLI task to create and use the ACI instance (and supporting structures). Create Resource Group (if not created)

This task simply creates (if it doesn’t already exist) the Resource Group which all of the other services will be created in. It leverages the variables defined above and has a simple inline script.

Similar to the previous task, this task simply create the Storage Account and File Share to be used with the OWAP ZAP Container Instance. This File Share will be mounted in the container instance and used to save the test results file generated by the security scan. The file will then be downloaded to be transformed and published to Azure DevOps Test Runs, as well as kept in archive for audit purposes.

This task does two things:

Once the container is created, the baseline scan will be called. OWASP ZAP offers a Baseline Scan as part of their Docker image. The ZAP CLI would also be an option if the Baseline is not sufficient.

The -x parameter will generate the XML report in the location mapped to the File Share above. We use the default config settings, but custom configurations could be provided through the file share.

This task will download the “OWASP-ZAP-Report.xml” report to the local agent for conversion and publishing.

Instead of an Azure CLI task, this will be a PowerShell task to convert the OWASP ZAP report from its native format to a format (in this case, I chose NUnit3 since it was the closest) which can be uploaded to Azure DevOps Test Runs.

The script itself is fairly simple, but it relies on the template which can be found here: https://dev.azure.com/francislacroix/_git/CodeShare?path=%2FOWASPBlog%2FOWASPToNUnit3.xslt

The script itself is straightforward, set as Inline while leaving the rest of the parameters to their default value:

Now that the results have been converted, we can publish them using the built-in “Publish Test Results” task. After adding it, set the following parameters:

Adjust the “Test Result files” if there are additional tests in the Release, or if the name was edited in the conversion script.

Once all the scans are completed, the Container Instance can be destroyed. This is again an inline script using default settings.

This is a fairly simple use case for integrating OWASP ZAP in a Release pipeline, but the same concepts can be used for many other tools. I hope this helps you improve your automation and security of your software.

Insights to Application Awareness and Understanding
Application Insights is an Azure-hosted service which provides for in-depth application monitoring, whether running in the cloud or on-premise. It provides powerful tools for monitoring, analysis, and diagnosis, with capabilities such as live metrics streaming, tracking response times and failure rates, and much more.