The 2201.24 release of PIX on Windows includes a feature that treats a set of events that follow a common naming pattern as the same event in the Timing Capture Metrics view.  You’ll find this feature useful if you follow the common practice of naming the PIX events that represent a frame of CPU work (or any other repeated set of work) with a sequential number pattern, as in this example:

In this case, using the Metrics View to analyze an individual frame event, such as “Frame 339” isn’t useful, but analyzing the set of “Frame *” events as a group can be used to find outliers in frame time.

When populating the Selector panel, PIX will look for events whose names follow a particular pattern.  These events are then grouped, or consolidated. The individual events that fit the patterns will be treated as the same event for purposes of graphing and analysis.

The number at the end of the pattern may be either an integer or a decimal number. If the number is a decimal, it must have values on both sides of the decimal point. For example, the events “Render 10.987” and “Render 12.789” would be consolidated.

The consolidated events are shown in a separate node in the Selector panel tree under PIX CPU Events, as shown in the following figure. 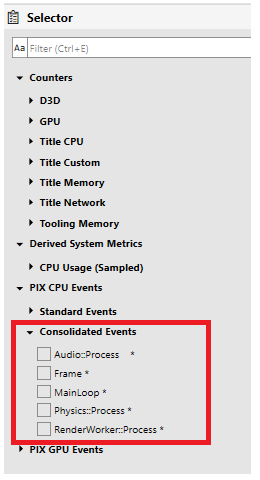 Note that events are only consolidated for PIX CPU events. PIX GPU events do not currently support consolidation.

Clicking the checkbox next to a consolidated event will add the group of events to the Active Metrics panel just as with a standard event. Hovering over a point in the graph will show the name of the underlying event, as shown in the following figure.

There may be times when the algorithm PIX uses to consolidate events results in the grouping of a set of events that should instead be kept separate. If this occurs, uncheck the Enable Metrics View Consolidated Events (requires re-open of capture) checkbox in the Settingsview.

As always, use the PIX feedback button in the upper right corner of the UI to send us feature requests and bug reports.