Microsoft Graph is an API Gateway that provides unified access to data and intelligence in the Microsoft 365 ecosystem. The service needs to run at very high scale and to make efficient use of Azure computing resources. We’ve been able to achieve both of those goals, using .NET as our chosen cloud stack. I’ll tell you more about our journey of building Microsoft Graph into the service it is today.

The journey to .NET 6 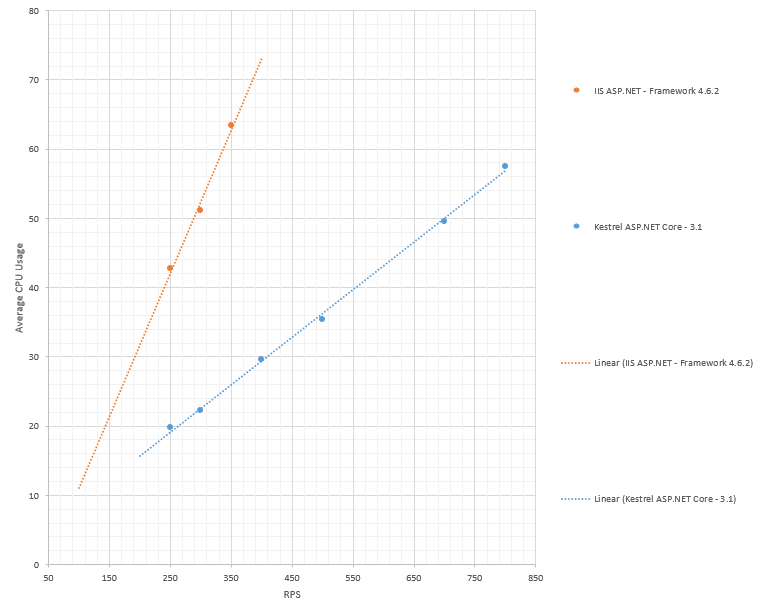 The chart illustrates a major increase in RPS relative to the same CPU utilization when we compare both stacks. At 60% CPU we are at approximately 350 RPS in the old stack (orange) and 850 in the new stack (blue). The new stack is performing significantly better at higher CPU thresholds.

It’s important to note this benchmark uses synthetic traffic and that the improvements observed don’t necessarily directly translate to higher-scale production environment with real traffic. In production, we observed a 30% CPU reduction (for the same traffic volume).

One big undertaking to make the migration to .NET Core possible was the modernization of our build system.

Previously, we were using an internal build system with a toolchain incompatible with .NET Core. So the very first step in our case, was to modernize the build system. We migrated to a newer and modern build system, mostly using the Visual Studio toolchain with MSBuild and dotnet support. The new toolchain supports .NET Framework and .NET Core, and gives us flexibility needed.

Ultimately, the investment of modernizing the build system, while difficult at first, it has increased our productivity dramatically, with faster builds and projects that are easier to create and maintain.

Many improvements occur with every .NET upgrade, even without the Graph team doing any explicit work to improve performance. Each new .NET version improves low-level runtime APIs, common algorithms, and data structures, resulting in a drop in CPU cycles and GC work. For a service that is compute bound like Microsoft Graph, using the new runtime and algorithms that reduce time and space complexity is crucial, and one of the most effective ways to make the service fast and scalable. With the help of our friends on the .NET Team, we’ve been able to increase throughput, reduce latency overhead and compute operational costs. Thanks!

The other reason to migrate was to modernize the codebase. A modern codebase attracts talent (hiring) and enables our developers to use newer language features and APIs to write better code. Constructs like spans introduced in .NET Core are priceless. One of common ways I use spans is for string manipulation. String manipulation is a common pitfall in old .NET codebases. Old patterns often leading to an explosion of string allocations due to endless concatenations that put pressure on GC and ultimately reflect in higher CPU cost. And developers do not even realize about the real cost and implications of such allocations. Spans and string.Create introduced in .NET Core gave us a tool to manipulate strings, avoiding the cost of unnecessary string allocations on the heap.

In addition, we rely on observability tools to monitor the cost of the code deployed in dimensions like CPU, memory, and file and network I/O. These tools help us identify regressions and opportunities to improve processing latency, operational costs, and scalability.

There are many other improvements, not captured by this list, that include algorithms and data structures as well as important architectural and infrastructure changes. Ultimately, .NET Core and the language features enable us to be more productive and to write algorithms and data structures that reduce the time and space complexity, which is crucial to achieve our goals in the long haul.

Last but not least, .NET Core makes our service ready to run in Windows and Linux, and enables us to be on the leading edge to innovate at a quick pace, with transport protocols like HTTP/3 and gRPC.

This section describes the strategy employed to migrate from ASP.NET to an ASP.NET Core environment and it is meant to serve as high-level guidance.

The first pre-requisite is a build system that allows you to build .NET Framework and .NET Core assemblies, if that is not already the case.

For the Graph team, modernizing the build system, not only made the migration to .NET Core possible, but it has also increased our productivity dramatically, with faster builds and projects that are easier to create and maintain.

It’s important to have a good architecture in place to perform the migration. Let’s use a diagram as an illustration of three main stages that we’ll go through.

If your solution isn’t already decomposed in multiple assemblies (stage 1), it’s a good opportunity to do it now. The ASP.NET assembly should be a very thin stub for the web server, abstracting out the application from the host. This ASP.NET assembly should be host specific and reference downstream libraries that implement individual components like controllers, models, database access, and so on. It’s important to have an architectural pattern in place with separation of concerns, as that helps simplify the dependency chain and the migration work.

In our service this is accomplished with a single HTTP application handler to process incoming requests, which is host specific. The handler converts the incoming HttpContext to an equivalent object agnostic from the host, which is passed to downstream assemblies that use the object to read the incoming request and write the response. We use interfaces that abstract the incoming HttpContext used by each host environment, System.Web.HttpContext and Microsoft.AspNetCore.Http.HttpContext respectively. Furthermore, we implement routing rules in downstream assemblies, agnostic from the host which also simplifies the migration. The service does not have UI or a view component. If you have a view component with MVC and model binding, the solution will necessarily be more complicated.

Create an inventory of all dependencies used by the service that are .NET Framework only and identify the owners to engage with them if needed.

Classify each dependency based on relevance and the return of investment. Using and maintaining dependencies comes with some baggage and tax, they better be worth it. Typically, a good dependency adheres to the following principles:

If any of these premises is not met, it might be time to find an alternative, either by finding another dependency that does the job or by implementing it.

Step 4 — get rid of .NET Framework dependencies, from project libraries

Start migrating dependencies one by one, moving to the equivalent in .NET Standard. If there are many projects in the solution, start working on the projects that are at the bottom of dependency chain, following a bottoms-up approach, as typically they have the least number of dependencies and are easier to migrate.

Projects targeting .NET Framework can continue doing so, while migration work is in progress. Once a project no longer references any .NET Framework dependency, make it target .NET Standard.

If the service has a legacy or is sizable, likely you will find dependencies buried that are hard to get rid of. Don’t give up.

In the case of the Microsoft Graph migration, we used all of these options at different times and for different dependencies. Currently we still run one console application as .NET Framework, and load one .NET Framework assembly in the service using compatibility shim.

Create a new project for ASP.NET Core, side-by-side with your current ASP.NET Framework project, with equivalent settings. New ASP.NET Core projects use Kestrel by default. It is very good and is where most .NET Team investment goes. It is their cross-platform web server. There are however other choices you can consider, like HTTP.sys, IIS, and even NGINX.

At this point, you should have completed stage 2 (in the image I shared above) and are ready to do A/B test and start rollout.

Create a rollout plan that allows for A/B testing in some production capacity (for example, deploy the new runtime to one scale set), after passing through all pre-production gates. Testing at scale, with real traffic, is the ultimate gate and the moment of truth.

You can measure application efficiency before and after, measuring differences between A/B bits, using the following heuristic:

During the first rollout, minimize the changes introduced in the payload, to reduce the number of variables that can cause unexpected regressions. If we introduce too many variables in the payload, we are increasing the odds of introducing other bugs that can be unrelated to the new runtime, but still waste engineers’ time to identify and root cause them.

Once the initial rollout succeeds in a small scale and it is vetted, plan to enable the new bits using gradual rollout following the safe deployment practices in place. It is important to follow a gradual rollout, that allows you to detect and mitigate issues promptly that may surface with increased volume and scale.

Once you have the service running in ASP.NET Core, deployed at scale and vetted, it’s time to remove the very last fragments of .NET Framework still lingering around. Remove the web server project for ASP.NET and move all project libraries to target .NET Core explicitly, instead of .NET Standard, so you can start using newer APIs and language features that will enable developers to write better code. And with this, you have gone through stage 3 successfully.

Some of the main learnings and upgrade tips applied.

One core function of the service is to parse the incoming URI. Over the years we ended up having different points throughout the codebase, with hard assumptions on how the incoming request is encoded. A lot of those assumptions were violated when we moved from ASP.NET to ASP.NET Core, resulting in numerous issues and edge cases. After a long time, several fixes and analysis, we consolidated in the following rules, used to convert ASP.NET Core path and query to the old ASP.NET format that different parts of the code require.

With .NET 6 we have enabled Dynamic PGO, one the most exciting features of .NET 6.0. PGO can benefit .NET 6.0 applications by maximizing steady-state performance.

Dynamic PGO is an opt-in feature in .NET 6.0. There are 3 environment variables you need to set to enable dynamic PGO:

These settings increased the application efficiency by 13% for Azure AD Gateway.

For more learnings, refer to the following blogs posted by our Azure AD gateway sister team:

Every new release of .NET comes with tremendous productivity and performance improvements that continue helping accomplish our goals to build scalable services, with high availability, security, minimal latency overhead, and optimal routing, while having the lowest operational costs possible.

Be assured, there is no magic wand. In most cases, the migration needs serious commitment and hard work from the team. But in the long haul, that work undoubtedly pays off many dividends.