Upgrading a WCF service to .NET 6 with CoreWCF

Almost three years ago, I posted a blog walking through the process of migrating a WPF app to .NET Core 3. The app I migrated was a simple commodity trading sample called Bean Trader. At the time, though, I was only able to migrate part of the sample solution. The Bean Trader solution includes both a WPF client and a server-side application that the client communicates with to propose and accept trades. The client and server communicate using WCF. Because .NET Core 3 (and subsequent versions like .NET 5 and 6) supported client-side WCF APIs but not server-side ones, I was able to migrate the Bean Trader client but had to leave the server running on .NET Framework.

With the recent announcement that CoreWCF has reached 1.0, I’m excited to finish upgrading the Bean Trader sample to .NET 6!

CoreWCF is a community-driven .NET Foundation project that makes WCF surface area available on modern versions of .NET. Although CoreWCF is not a Microsoft-owned project, Microsoft has announced that it will provide product support for CoreWCF. While newer technologies like gRPC and ASP.NET WebAPI are still recommended for new development, CoreWCF is a great option to help projects with existing heavy WCF dependencies move to .NET 6.

Although CoreWCF supports many common WCF scenarios, it does not support all WCF functionality. Your modernization experience may vary depending on the overlap between your WCF usage and the functionality included in CoreWCF. If functionality you depend on is not yet in CoreWCF, please provide feedback in the Feature Roadmap issue so that CoreWCF project maintainers can prioritize work based on community need.

The Bean Trader app (available on GitHub) is a sample I created several years ago to use when demonstrating how to migrate to .NET Core. Because the sample was originally only intended to show off modernizing the client, the Bean Trader service is quite simple. It consists of a class library with models and interfaces, and a console application that hosts a WCF service (using Net.Tcp transport with certificate authentication) allowing clients to propose or accept trades of different colors of beans. Even though the sample app is small, I think it’s still useful to see the process used to migrate it to .NET 6.

To make the migration quicker, I will use the .NET Upgrade Assistant. Upgrade Assistant is a command-line tool that helps users interactively upgrade projects from .NET Framework to .NET Standard and .NET 6. Upgrade Assistant doesn’t yet automate migration from WCF to CoreWCF (though it’s on the project’s backlog), it is still useful to run the tool so that project files will be migrated, NuGet package references will be updated, and so on. After the tool runs, I will make the changes necessary to migrate from WCF to CoreWCF manually.

With Upgrade Assistant installed, I can begin the migration process by running it on the BeanTrader solution file. By running on the solution file (rather than a specific project), I’m able to upgrade both the class library and server console app with one execution of the tool.

The command to upgrade the solution is:

The tool then guides me through a series of upgrade steps (which are all taken care of automatically by Upgrade Assistant) as shown here. 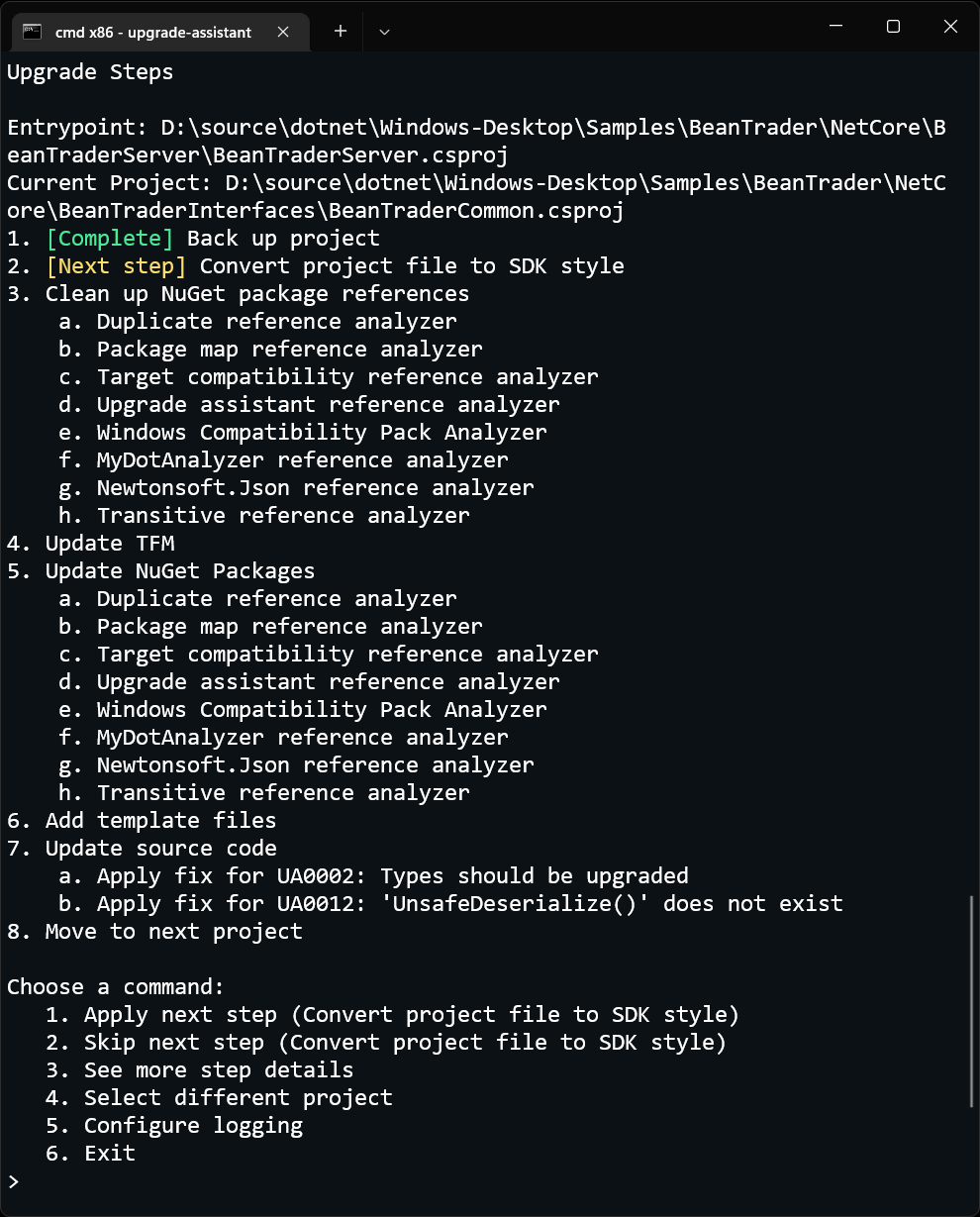 The complete list of steps that I apply via Upgrade Assistant are:

Now that Upgrade Assistant has done the work to start the upgrade process, it’s time to upgrade to CoreWCF. Opening up the Bean Trader solution in Visual Studio, I find that the BeanTraderCommon class library builds successfully. That project’s upgrade to .NET Standard is done. The BeanTraderServer project has some errors, though, related to not being able to find some WCF types.

To start upgrading to CoreWCF, I add a NuGet package reference to CoreWCF.NetTcp version 1.0. I also replace the using System.ServiceModel; import in BeanTrader.cs with using CoreWCF;. This addresses all the errors except for one in program.cs about how I’m creating a ServiceHost.

There are different kinds of WCF projects (not all will be creating and starting ServiceHost instances directly), but all CoreWCF apps run as ASP.NET Core endpoints. The code shown here uses the new .NET 6 minimal API syntax to get the ASP.NET Core host up and running with minimal code, but it would also be fine to use other ASP.NET Core syntaxes (having a separate Startup.cs, for example), if you prefer. CoreWCF samples demonstrate both approaches.

Notice that the certificate configuration is copied from the old sample and is for demo purposes only. A real-world solution would use a certificate from the machine’s certificate stores or from a secure location like Azure Key Vault. Also, this is a good example of how service host properties can be changed when using CoreWCF but the scenario of setting a server certificate is specific to NetTcp scenarios. For HTTPS endpoints, SSL is setup via ASP.NET Core APIs just as it would in other ASP.NET Core apps.

I also replace the host.Close() call in the original sample with await app.StopAsync().

At this point, the app builds without error! The only thing left to fix is to make sure that configuration for the service is loaded as expected.

As mentioned previously, .NET 6 doesn’t include a system.serviceModel section by default. However a lot of existing WCF applications used app.config and web.config to setup bindings. To enable easy migration, CoreWCF includes APIs that can explicitly load configuration from xml config files.

To make use of the Bean Trader server’s WCF configuration, I begin by adding a reference to the CoreWCF.ConfigurationManager package. Then, I move the system.serviceModel section from the app’s app.config (it was left commented out by Upgrade Assistant) into a new config file. The file can have any name, but I’ve called mine ‘wcf.config’.

There are some small differences in what’s supported in WCF configuration between WCF and CoreWCF, so I need to make the following changes to wcf.config:

Finally, I update the app’s main method to add the configuration to the ASP.NET Core app’s dependency injection container: builder.Services.AddServiceModelConfigurationManagerFile("wcf.config");.

At this point, the app will work and clients should be able to successfully connect to it. I still want to make the WSDL available, though, so I’m going to make a few more changes to the project. First, I add the following code to the main method to have the ASP.NET Core app listen on port 8080 (since that is the port the WSDL was downloaded from previously):

Second, when registering services, I’ll add a call to builder.Services.AddServiceModelMetadata() to ensure that metadata services are available and then I’ll get the ServiceMetadataBehavior instance that is registered (as a singleton) and modify it to make WSDL download possible. This code needs to go after building the app but prior to starting it:

With those changes made, the Bean Trader service is now completely migrated to .NET 6! I can launch the app and connect to it with the existing client. And the WSDL is available at localhost:8080/metadata. To see all of the changes discussed in this post in their entirety, you can look at this pull request which updates the Bean Trader sample so that, finally, the NetCore folder of the sample contains only .NET Core and .NET 6-targeted projects!

The Bean Trader sample is only a small app, but hopefully this walk-through demonstrates the sorts of changes needed to get WCF services working on .NET 6 with CoreWCF. The WCF service implementations were unchanged except for referencing some different namespaces and most of the configuration xml was re-used. I had to make some changes to how the service hosts were created (the services are hosted by ASP.NET Core now) but I was still able to reuse code that had previously been used to customize service host behavior.