DirectX 12 Ultimate is the new gold standard for gaming graphics on both PC and the next generation of Xbox consoles: It delivers movie-quality visuals through DirectX Raytracing, boosts framerate through Variable Rate Shading, enables fast game load with beautiful high-resolution textures through Sampler Feedback, and unlocks vast open and detailed worlds through Mesh Shaders. An integral part of Microsoft’s commitment to gaming, DX12 Ultimate works synergistically with other innovations like Xbox Game Pass and Xbox Game Bar to bring the cohesive and high-performance experiences gamers deserve.

Since our announcement back in March, we have continued working with partners to bring next-gen gaming graphics to new hardware in time for the holidays, such as AMD Radeon™ RX 6000 Series graphics cards and NVIDIA GeForce RTX 30 Series GPUs. If you play on PC and want to level up your Windows 10 gaming experience with DX12 Ultimate, read on!

If you are upgrading your gaming PC or buying a new one, look no further than “DirectX 12 Ultimate” on the product page or retail boxes!

AMD recently announced their Radeon™ RX 6000 Series graphics cards, which deliver impressive support of the full DirectX 12 Ultimate feature set and the upcoming DirectStorage API. With the help of DX12 Ultimate, AMD’s new Radeon™ RX 6800 Series and RX 6900 XT graphics cards teleport you inside the action with the latest in visual technologies, enabling realistic lighting, shadows, and reflections along with new levels of detail. The new graphics cards will be available to gamers starting November 18th.

Looking for a pre-built gaming PC? Make sure the graphics cards are from the list above so you can rest assured for the support for the latest graphics features.

When you are putting your hands on a new gaming PC, it is easy to check whether your system is ready for next-gen gaming: just hit Win+G to bring up Xbox Game Bar, open Settings, and look under “Gaming features” to see if your PC is configured to support DirectX12 Ultimate. The link in the UI will also direct you to more details, including hardware upgrade light up these features.

Our friends from Xbox are making Xbox Game Bar the hub for PC gamer to customize and to control their gaming PCs. In the product update today, Xbox Game Bar also introduces other cool features, notably a new Resources widget which lets you not only see which apps are using up system resources, but also lets you shut them down from right there without leaving the game. Make sure to check their release blog post for more details. 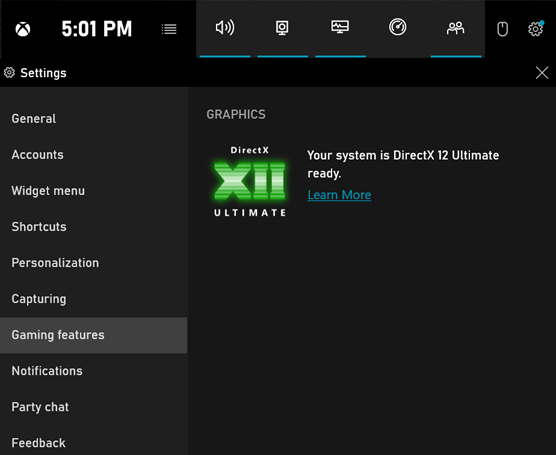 Now we come to the final step: to find and download the games using DX12 Ultimate features to enjoy the next-gen gaming graphics!

To begin with, look at Xbox Game Pass – it is a great value to gamers and offers access to more than 100 high quality titles. Among those games, you will find Gears Tactics, the first PC game shipped with DirectX Variable Rate Shading and witnessed performance gains up to 18.9%. Other titles using DX12 Ultimate features are also coming to Xbox Game Pass.

AMD displayed several PC games using DX12 Ultimate features running on Radeon™ RX 6000 Series hardware in their product announcement, including Far Cry 6, World of Warcraft: Shadowlands, Godfall, Dirt 5, and The Riftbreaker. Below is a demo clip from Dirt 5, where gamers will see the raytracing-based shadows by DirectX Raytracing, and improved framerate by Variable Rate Shading. Starting on October 29th, gamers will be able to watch other feature videos on different game titles featuring DirectX 12 Ultimate, and you can follow their featured games page for further updates.

NVIDIA also demonstrated a list of games coming this holiday on their GeForce RTX GPUs. The demo clip below shows how DirectX Raytracing brings cinematic level of reflections, diffuse illuminations, shadows, and ambient occlusions to gamers in Cyberpunk 2077. You can find more games on NVIDIA’s October update page.

Note that, all these games using DX12 Ultimate features will run nicely on all DirectX 12 Ultimate compliant hardware. And every month, more current and upcoming games join this ever-growing list.

Whether you play on Windows 10 PC or on the next generation of Xbox consoles, we hope you enjoy DirectX 12 Ultimate this holiday!