The 2019.07 update of vcpkg, a tool that helps you manage C and C++ libraries on Windows, Linux, and macOS, is now available. This update is a summary of the new functionality and improvements made to vcpkg over the past month. Last month was the first time we created a vcpkg release (Vcpkg: 2019.06 Update).

In this post, we will cover caching in Azure Pipelines with vcpkg in addition to many new port and triplet updates, improvements for port contributors, and new documentation. For a full list of this release’s improvements, check out our changelog on GitHub.

Caching in Azure Pipelines with vcpkg

The public preview of caching in Azure Pipelines is now available, and you can use it with vcpkg!

You can use pipeline caching to improve build time by allowing previously built and cached vcpkg artifacts (including libraries) to be reused in subsequent runs. This allows you to reduce and avoid the cost to rebuild the same libraries for each build run the same libraries. Caching may be especially useful with vcpkg when you are installing and building the same dependencies (libraries) over and over during your build. That process can often be time-consuming if it involves building large libraries.

For example, if you have a C++ application that uses SQLite databases, you’ll likely want to use SQLite3 among other libraries. Each time you run a build on your server, you install vcpkg and the sqlite3 library. Without using pipeline caching, this may take some time:

Now, with Azure Pipelines Caching, we can have a much faster and better experience. One of our community contributors and Microsoft employee, Luca Cappa, created a pipeline task to help you use the CacheBeta pipeline task. We’ll show you how leveraging his scripts reduced the ‘run vcpkg’ build step from 2m 26s to just 14s!

The CppBuildTasks project pipeline task does the following: 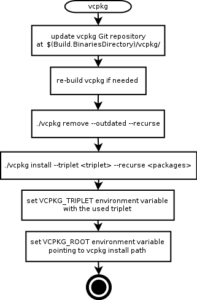 To get started with CppBuildTasks with Azure Pipelines in your project you can follow the simple CppBuildTasks developer documentation.

Looking at the example, there are a few things to note:

Now, taking a look at installing vcpkg and sqlite3 using the CppBuildTasks script, we can see a remarkable difference in the build time on our Ubuntu server: You can view more examples in the Samples section of the CppBuildTasks GitHub repo.

We added 37 new ports in the month of July. Some notable additions include: 7zip, basisu, librdkafka, mimalloc, mongoose, and zookeeper. You can view a full list of new ports in our 2019.07 changelog. For a full list of libraries, search for a library name in the GitHub repo ports folder or use the vcpkg search command.

In addition to new ports, we updated 160 existing ports.

Vcpkg provides many triplets (target environments) by default. This past month, we continued increasing the number of ports available on Linux – from 823 to 866.

Here is a current list of ports per triplet:

Don’t see a triplet you’d like? You can easily add your own triplets. Details on adding triplets can be found in our documentation.

We also made improvements to the vcpkg infrastructure including a new vcpkg variable and a mechanism to modify and set vcpkg triplet variables on a per port basis. These features are the first steps towards enabling better tool dependencies in vcpkg. Stay tuned!

Before we added the VCPKG_ENV_PASSTHROUGH triplet variable, the only environment variables on Windows available to the portfile were those found on an allow list hard-coded into vcpkg. This new triplet variable allows us to augment that list with variables defined in the triplet or the environment overrides file.

Port authors can add an environment-overrides.cmake file to a port, override, or set, vcpkg triplet variables on a per port basis. For example, this allows ports to specify environment variables that are not allow listed in the vcpkg source to be available to the portfile.

We also updated our documentation to reflect these new changes. Check out the following docs for more information on some of the updates outlined in this post in addition to a couple other areas:

Thank you to everyone who contributed to vcpkg! We now have 659 total contributors. This release, we’d like to thank the following 11 contributors who made code changes in June:

Install vcpkg, give it a try, and let us know what you think. If you run into any issues, or have any suggestions, please report them on the Issues section of our GitHub repository.

We can be reached via the comments below or via email (vcpkg@microsoft.com). You can also find our team – and me – on Twitter @VisualC and @tara_msft.

Get Started with vcpkg

C++ Cross-Platform Development with Visual Studio 2019 version 16.3: vcpkg, CMake configuration, remote headers, and WSL
In Visual Studio 2019 you can target both Windows and Linux from the comfort of a single IDE. Visual Studio’s native support for CMake lets you open any folder ...