Native Memory Diagnostics in VS2015 Preview While this tool was a good start in providing Visual Studio developers with an in-box memory profiler, it lacked the ability to easily examine heap contents at a specific program state since the entire program had to be shut down in order to drill deeper into the data.

Now there is a new and improved memory profiler available in Preview that allows developers to leverage the debugger’s powerful control of program flow and examine their app’s heap contents at any break state.  Here is a great overview of the new memory profiling experience with an in-depth feature summary complete instructions on activating the feature (Where do I find it? section).  Upon following these instructions to activate the tool for the first time, simply pressing F5 will launch the new profiler during the debug session.  There is now no longer a need to terminate the app to view the heap snapshots! The rest of this post will focus primarily on using the new tool with native applications and details the specifics of the tool’s workflow.

To show off the new memory profiler, an MFC open-source chip-tune sequencer called FamiTracker has been loaded into Visual Studio and modified slightly to build with the new compiler.  After enabling the memory profiler via the reg key and starting a debug session on the app with F5, the tool loads and soon the live memory usage is shown and the heap snapshot reel appears below it:

Snapshots can be taken at different points in time to capture the heap state.  Instance values are only viewable for the most recent shot and when in a break state.

In this walkthrough, the initial program state for FamiTracker is the initialized sequencer UI: 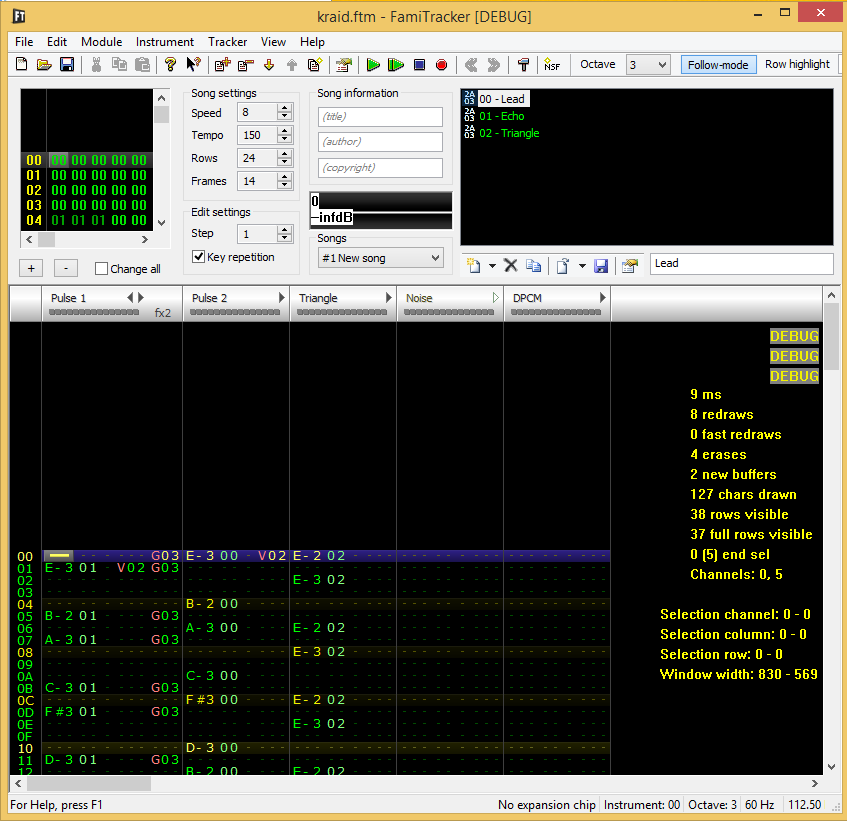 Another dialog called the instrument editor can be launched to edit the properties of each instrument: Using the new memory profiler, we will take heap snapshots across these two program states to better understand the runtime memory consumption of this app.

First we take a baseline snapshot to store the initial heap contents.

By taking a snapshot at the breakpoint above at the beginning of OnInitDialog(), we can see the heap contents of the app just before the instrument editor dialog starts allocating objects.  A snapshot will list the object types, counts, and memory footprint. 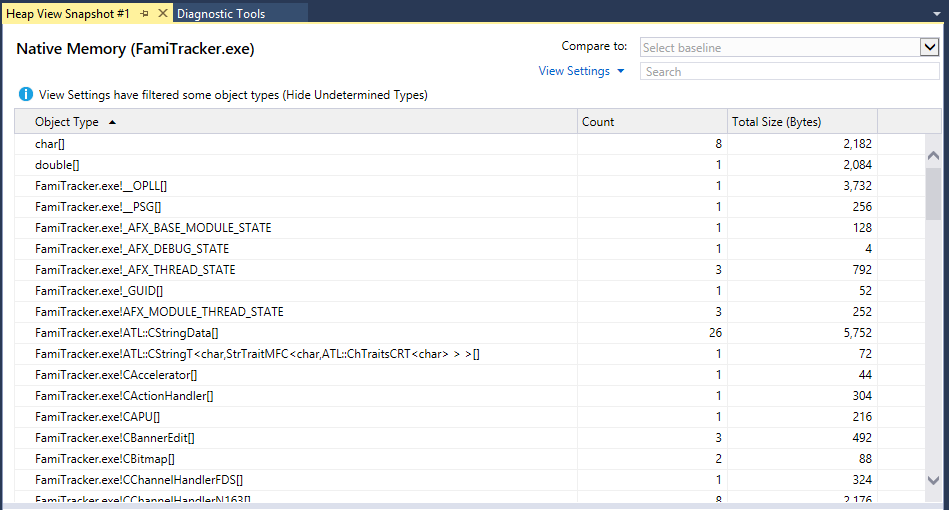 Since we are at in a break state, the instance of each type can be viewed by double-clicking a row, or the

Selecting a type will present a list of all of the allocations of that type, complete with values and allocation call stacks for each instance.  Below are all of the instances of CCHannelHandlerN163[]: The +51,227 bytes and +405 allocations reveal the total additional memory consumed by launching the instrument editor dialog relative to the baseline snapshot #1, and the top two numbers reveal the total heap contents.  Clicking either of these will launch the diff snapshot and list count and type of the additional objects that have exist since the previous snapshot.  To see all object in the heap snapshot, simply click one of the two top details in the snapshot that tells the total consumption.  Shown below is the second snapshot diffed to the first: 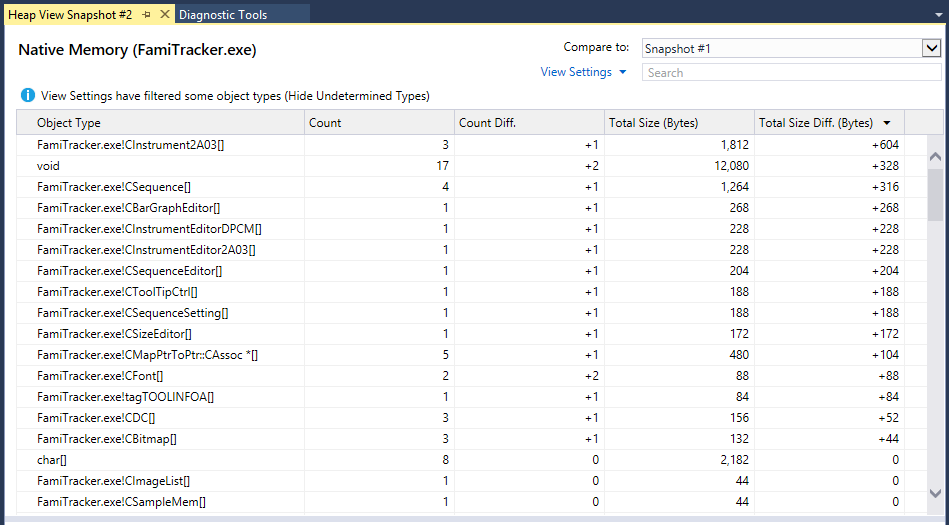 We can even examine the memory overhead more precisely by putting breakpoints at the beginning and the end of a particular function, and taking two snapshots for comparison.  The InsertPane function is called twice during the instrument dialog invocation, so it would be nice to see the specific impact it has on the overall execution.  Two breakpoints have been set to encapsulate the InsertPane function, and a snapshot is taken at each break.  In the snapshot details of the second snapshot below, we are able to clearly see that this function is consuming about 12 KB within its 20 lines of code.

The snapshot diff technique allows any region of your code to be analyzed for memory footprint and provides a powerful tool for exposing memory leaks that may occur between states of execution.  Once two snapshots are taken, the latest snapshot will automatically show the diff to the previous one.  To diff non-sequential snapshots, simply click the top right corner of a snapshot and select a snapshot to diff against.

This can also be done by clicking the Compare to combo-box at the top right of an opened snapshot select the desired snapshot.

Due to the nature of the tool’s type derivation from PDBs, some types cannot be determined due to lack of symbols, or due to the use of custom allocators. We plan to expose the extensibility model for custom allocators in a future blog post. Since it is important to not hinder the workflow for examining user defined types with available symbols, we have chosen to hide these object by default.

These undetermined objects can easily be seen by selecting the View Settings pull-down at the top of the heap view and unchecking the option.

This will list the “Undetermined” type entry in the heap table and in turn will reveal all the instances in memory, complete with the allocation call stack.  Below, the object instance at address <0x1E1148> is shown:

In the case that there are not any determined types and the default hide setting is enabled, the heap table will show a watermark with the following string:

As mentioned in Charles’s blog post, the currently supported native application types are Win32, MFC and Windows Store apps. All C++ projects must be built with the new Visual Studio 2015 (v140) compiler to work properly with this tool. The following scenarios are not supported:

This is an early version of this exciting new feature, please share your thoughts and help us make this a valuable and powerful tool for your memory diagnostic needs!

iOS / Linux Cross-Platform C++ Survey
We want you to take another survey.Many of you continue to participate in our surveys and opt-in for one-on-one conversations about your development habits. Your feedback...

Eric Battalio
November 25, 2014
0 comment
GoingNative 32: C++17 Sneak Preview
From Sneak Preview of C++17 Channel9:Join us with ISO Committee member (and Microsoft as well, of course =P) Gabriel Dos Reis, who graciously took the time to give ...