Docker containers provide a consistent development environment for building, testing, and deployment. The virtualized OS, file system, environment settings, libraries, and other dependencies are all encapsulated and shipped as one image that can be shared between developers and machines. This is especially useful for C++ cross-platform developers because you can target a container that runs a different operating system than the one on your development machine.

In this blog post we’re going to use Visual Studio’s native CMake support to build a simple Linux application in a Linux docker container over SSH. This post focuses on creating your first docker container and building from Visual Studio. If you’re interested in learning more about Docker as a tool to configure reproducible build environments, check out our post on using multi-stage containers for C++ development.

This workflow leverages Visual Studio’s native support for CMake, but the same instructions can be used to build a MSBuild-based Linux project in Visual Studio.

First, we’ll set-up a Linux docker container on Windows. You will need to download the Docker Desktop Client for Windows and create a docker account if you haven’t already. See Install Docker Desktop on Windows for download information, system requirements, and installation instructions.

We’ll get started by pulling down an image of the Ubuntu OS  and running a few commands. From the Windows command prompt run:

This will download the latest image of Ubuntu from Docker. You can see a list of your docker images by running:

Next, we’ll use a Dockerfile to create a custom image based on our local image of Ubuntu. Dockerfiles contain the commands used to assemble an image and allow you to automatically reproduce the same build environment from any machine. See Dockerfile reference for more information on authoring your own Dockerfiles. The following Dockerfile can be used to install Visual Studio’s required build tools and configure SSH. CMake is also a required dependency but I will deploy statically linked binaries directly from Visual Studio in a later step. Use your favorite text editor to create a file called ‘Dockerfile’ with the following content.

We can then build an image based on our Dockerfile by running the following command from the directory where your Dockerfile is saved:

Next, we can run a container derived from our image:

The -p flag is used to expose the container’s internal port to the host. If this step was successful, then you should automatically attach to the running container. You can stop your docker container at any time and return to the command prompt using the exit command. To reattach, run docker ps -a, docker start <container-ID>, and docker attach <container-ID> from the command prompt.

Lastly, we will interact with our docker container directly to start SSH and create a user account to use with our SSH connection. Note that you can also enable root login and start SSH from your Dockerfile if you want to avoid any manual and container-specific configuration. Replace <user-name> with the username you would like to use and run:

The -m and -d flags create a user with the specified home directory, and the -s flag sets the user’s default shell.

You are now ready to connect to your container from Visual Studio.

Connect to your docker container from Visual Studio

Make sure you have Visual Studio 2019 and the Linux development with C++ workload installed.

Open Visual Studio 2019 a create a new CMake Project. CMake is cross-platform and allows you to configure an application to run on both Windows and Linux. 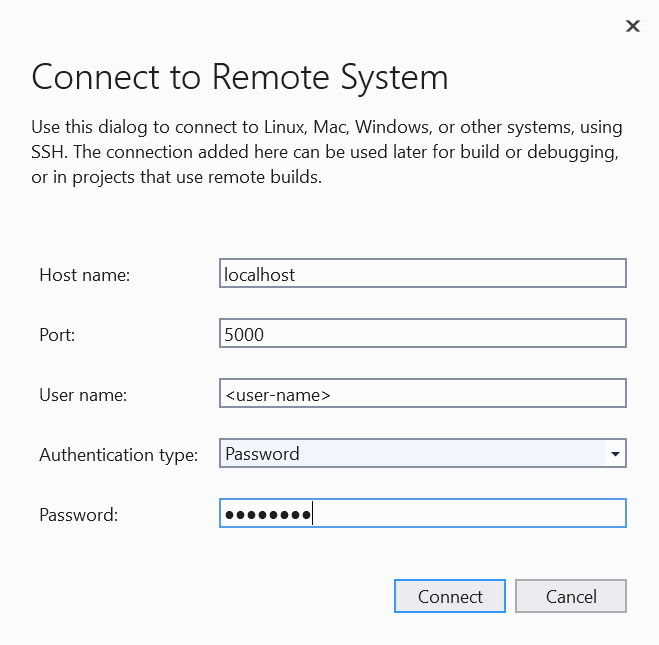 Your host name should be “localhost”, the port should be whatever you are using for your SSH connection (in this example we’re using 5000), and your username and password should match the user account that you just created for your container.

At this point the project behaves like any other CMake project in Visual Studio. To configure and build the console application in our Linux container navigate to “Manage Configurations…” in the configuration drop-down.

You can then select the green plus sign in the CMake Settings Editor to add a new “Linux-Debug” configuration. Make sure that the remote machine name of your Linux configuration matches the remote connection we created for our Linux docker container.

Save the CMake Settings Editor (ctrl + s) and select your new Linux configuration from the configuration drop-down to kick off a CMake configuration. If you don’t already have CMake installed on your docker container, then Visual Studio will prompt you to deploy statically linked binaries directly to your remote connection as a part of the configure step.

At this point you can build your application in your Linux docker container directly from Visual Studio. Additional build settings (including custom toolchain files, CMake variables, and environment variables) can be configured in the CMake Settings Editor. The underlying CMakeSettings.json file can store multiple build configurations and can be checked into source control and shared between team members.

This post showed you how to build a C++ application in a Linux docker container with Visual Studio. Stay tuned for our next post, where will we show you how to copy the build artifacts back to your local Windows machine and debug using gdbserver on a second remote system.

Do you have feedback on our Linux tooling or CMake support in Visual Studio? We’d love to hear from you to help us prioritize and build the right features for you. We can be reached via the comments below, Developer Community, email (visualcpp@microsoft.com), and Twitter (@VisualC).

Debugging Linux CMake Projects with gdbserver
Update 2/20/20: We have addressed a bug which allows you to debug simple CMake projects using one level of CMakeLists.txt files with gdbserver in Visual Studio 2019 ...

Erika Sweet
December 18, 2019
1 comment
C++ Inliner Improvements: The Zipliner
Visual Studio 2019 versions 16.3 and 16.4 include improvements to the C++ inliner. Among these is the ability to inline some routines after they have been optimized, ...