Let’s look at how the code for such applications would be written.

WSL Unix socket client code(link to the GitHub repo with the sample code):

The above code is self-explanatory. But, one thing worth noting is the path of the socket. For Windows application, the path is in Win32 format and for WSL applications, the format is as in Linux file system.

It is important to note that we enforce both Unix and Windows permissions for Unix interop between WSL/Windows–this is illustrated in the samples below.

NOTE: Turn on DrvFS metadata for these examples.

In this sample, we’ll bind a WSL Unix socket process to a path which it does not have access to. The binding will fail because I don’t have write permissions in Windows. 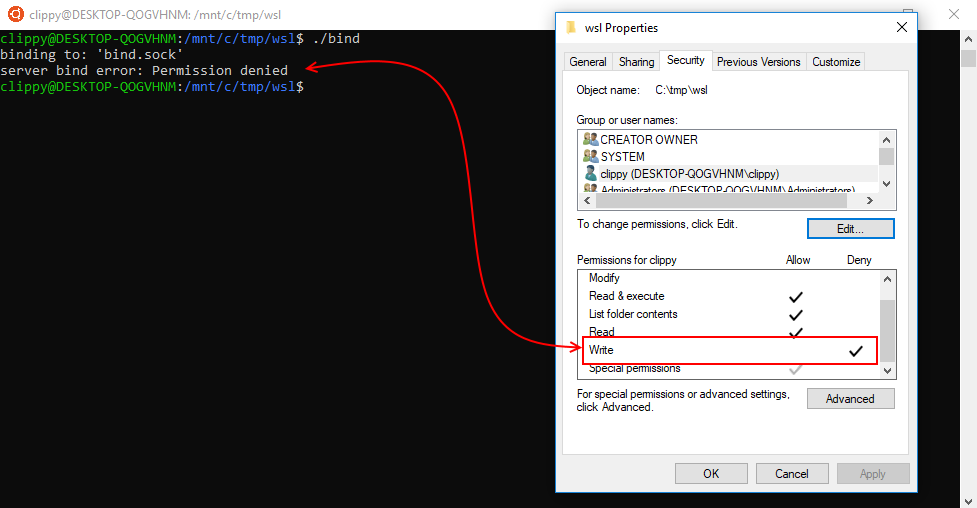 In this sample, a WSL Unix socket process connects to a Windows Unix socket path which it has access to from WSL, but not from Windows (I removed write permissions from user on this folder in Windows)

But if I run an elevated ubuntu (so that we do have write access on the file), I can connect as expected.

In this sample, a WSL Unix socket process connects to a Windows Unix socket path which it has access to from Windows, but not from WSL. You’ll see that I revoke access in WSL, which causes my client to fail to connect. Then, I’ll grant write access in WSL and the client will succeed.

Per-directory case sensitivity and WSL
If you have used the Windows Subsystem for Linux, you’re probably aware that it allows you to treat your Windows file systems (mounted under /mnt/c, /mnt/d, etc.) as ca