On October 2, 2018, Microsoft announced that the availability of the** Windows 10 October 2018 Update**. After the update was paused, the rollout resumed on November 13, 2018. You can read more about the Windows 10 quality approach here. This post, however, will cover what you can expect to see in WSL for the October 2018 Update, Windows 10 version 1809, and from recent Windows Insiders builds. You can find additional information on features and fixes in our detailed release notes.

We’re excited to share two additional distros in the Microsoft Store for WSL.

Ubuntu 18.04 is now available in the Microsoft Store. You might be wondering about the Ubuntu apps in the Store and how to update your distro. Read this Guide to Updating your Ubuntu’s App Release for more details.

You can now install WLinux from the Microsoft Store. WLinux is the first paid-for distro app available for WSL. It includes features as outlined on their GitHub repo such as wlinux-setup, which allows users to easily setup common developer toolchains, and removes unsupported features like systemd.

OpenSUSE 15 and SLES 15 are now available in the Microsoft Store. We are happy to have these new versions of SUSE ready for you to install and use!

You can now run WSL and Ubuntu 18.04 on ARM devices! If you’re interested in learning more about ARM devices. When you grab Ubuntu 18.04 from the Store we can detect if you’re running an ARM device and automatically grab you the ARM version of the app. Check out our //Build 2018 session on Windows 10 for ARM Developers (WSL at 13:58) for more information.

You heard that right – Kevin Gallo announced in the //Build 2018 keynote that Notepad now supports Linux line endings! More details on how this works can be found in the blog post on Extended Line Endings Support in Notepad. If you’d like to watch the keynote you can find the announcement at about 55:04 in the //Build Day 2 Keynote.

Launch a Linux Shell from the File Explorer

You can launch a Linux shell from the file explorer. We have added an “Open Linux shell here” context menu entry to the shell. This has been one of our top User Voice feature asks, so we are happy to finally add this functionality!

You can do this in the file explorer by selecting a folder and then Shift+Right Click to see the menu: 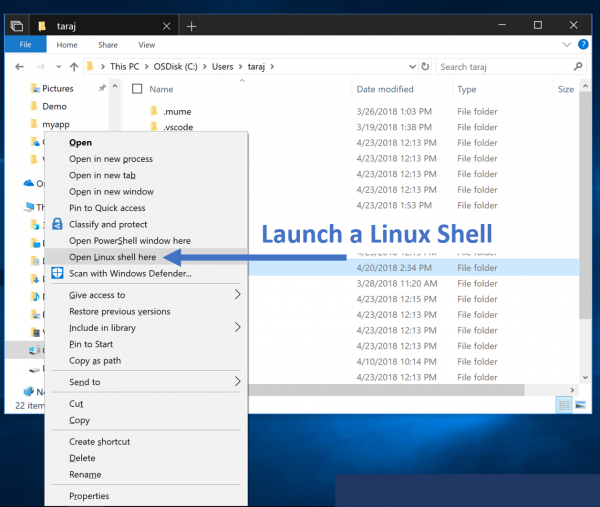 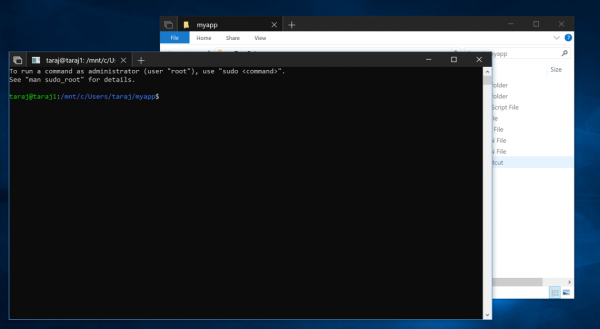 Directions on how you can change your default distro can be found in our distro management documentation. Essentially you can use wslconfig.exe to set a distro as the default.

There are a variety of reasons you may want to write a script to install WSL distros from the command line – Maybe you just got a new machine you want to setup. Or perhaps you want to programmatically define your dev machine without disrupting your command line workflow.

You can use the Windows Developer Setup Scripts to enable WSL (And many other features & tools) and install a distro in one-click. Here’s a sample of how you can do this. The below script should be run in a PowerShell Administrator terminal.

At the //Build 2018 Day 2 Keynote, we announced an open source project in partnership with Chocolately and Boxstarter that allows you to set up your dev box in just one click. You can read about this effort in our blog post on Joining us for a hot cup o Chocolatey!. If you’d like to get started using this project to set up your dev box you can also head over to the Dev Setup GitHub repo. 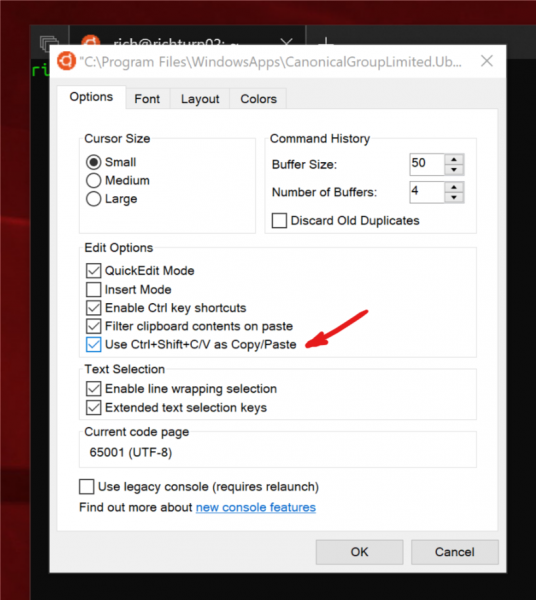 You can read more about this feature in our copy/paste blog post.

In addition to direct improvements to WSL, we released a series of improvements to the Windows Console. There’ve been some improvements to interop – you can now host windows applications inside tmux and screen without them destroying the rest of the window! We’ve improved our range of supported VT sequences. And, we also added a ConPTY API & infrastructure enabling 3rd parties to build terminals and servers more easily.

If you’d like to learn more about the console in general, check out the Windows Command-Line blog series by Rich Turner (@richturn_ms).

A huge thank you to everyone who helped make this happen! As usual, please do send us feedback and feel free to reach out on Twitter or file issues on the WSL GitHub repo. Here are our WSL team members who are on Twitter:

We look forward to building cool stuff with you!

Windows Command-Line: Unicode and UTF-8 Output Text Buffer
In this post, we'll discuss the improvements we've been making to the Windows Console's internal text buffer, enabling it to better store and handle Unicode and UTF-8 ...

Rich Turner
November 15, 2018
1 comment
New Experimental Console Features
As of Windows 10 build 18298, when you open the properties page of any Console window, you’ll notice an additional “Terminal” tab. Click on this tab and you’ll ...