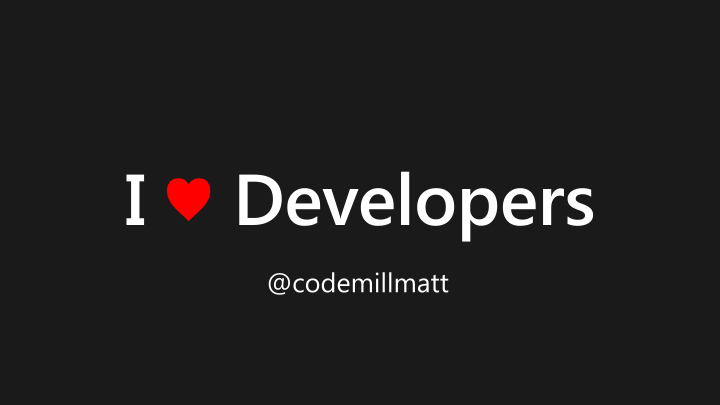 That’s right, I ❤️ every single one of you(!) and I want to know more about your stories building mobile apps. I want to hear stories of your successes and also, the not-so-successful adventures. Tell us what we can do better. Go ahead, ask me any questions about Xamarin or Azure, or mobile development in general and will do my best to answer. If I don’t know, I will find somebody who does. Sign up for a time to tell me your stories during My Office Hours!

On to recap what happened this past December and January!

In these last two months, five topics were brought up several times that’s worthwhile to discuss at a broader level:

Let’s dive into this one by one.

Comments about the Android development experience were by large positive! Several people commented on the faster build times that they’re seeing. And that makes sense! In Visual Studio 15.9 and Visual Studio for Mac 7.7, the Android team made several improvements to initial build time, incremental build time, and deploy time. Go ahead and update to the latest version of Visual Studio to see these performance increases yourself.

The Android emulators provided one area of confusion, however. Hyper-V or HAXM? Which is better? How can you even tell? And should you care?

Of course, you should care. If possible, run the Hyper-V emulators, they’ll give you the better performance. This article does a great job explaining the different hardware accelerations available. But which emulator, and how do you create them? You can read more on how to create them here and check out this video too. And recently the team has revamped the detection code, so it should pick the best emulator for you when debugging.

Another hot topic was XAML tooling – or really the editing experience when writing XAML code. Intellisense is the one thing that separates Visual Studio from Notepad (ok, amongst many, many others), and having solid Intellisense when writing code is a huge productivity boost. And I’ll be honest, XAML Intellisense isn’t as good as other languages that Visual Studio supports. And judging by some of the comments I received during the office hours, you’ve noticed that too.

First off, Visual Studio 2019 is introducing a Property Panel for editing XAML.

This will allow you to edit common Xamarin.Forms control properties, not from XAML, but from a Visual Studio property panel.

Check out all the other XAML improvements coming in this blog post.

Of course, let us know what other improvements can be made, by clicking on the Visual Studio Smiley Button or the Provide a Suggestion menu item in VS for Mac.

It was great to hear from so many of you who are developing desktop apps using UWP! One of the things I do with these office hours is both provide feedback to the product teams on what isn’t working for the community, but also what is working. So it was great to hear that so many people are having success in creating UWP applications using Xamarin.Forms!

However, there is some concern that Xamarin may drop UWP support from Xamarin.Forms. I’m here to tell you that’s not true! Xamarin.Forms has never stopped supporting an active platform. And there are no plans to stop support for UWP. So continue to develop those great UWP Xamarin.Forms apps, and feel comfortable in doing so knowing that UWP will be supported.

Again, I heard great things from the community about the Xamarin docs, how easy to read and helpful they are.

However, there were a couple of suggestions that could make them even better. The first was to include recipes of common things that mobile developers need to do every day. An example would be to write to an on-device database. Or make a call to a web service. I’m going to soft announce right here, right now, that I’d like to start a community effort to come up with a recipes guide that’s hosted on GitHub that does just that. If you’re interested in helping, reach out to me at @codemillmatt and we’ll make it happen!

Another suggestion was to a list of examples of apps with “pretty” user interfaces using Xamarin.Forms. It just so happens that Javier Suárez Ruiz maintains such a list! It’s on GitHub and showcases some very slick looking UIs!

Finally: What is the future of Azure Mobile App Services?

Everyone who has made it this far in the article should to go here to be impressed by what the Visual Studio App Center team has in the works!

That’s right – there are new mobile development capabilities coming to App Center, and even better they’re being designed in the open. So this is your chance to go there and comment on the work being done, let your voice be heard!

To Sum It All Up

It was an exciting couple of months, and thank you to everybody who took part in the office hours! If you’re interested in talking about anything Xamarin, mobile development, or Azure related, please don’t hesitate to sign-up for my office hours. I would ❤️ to talk to you!