We know performance matters when it comes to mobile apps. With Xamarin, your iOS and Android apps are fully native apps taking advantage of each and every optimization the platform has to offer. It’s no different if you’re building native mobile apps with Xamarin.Forms and its shared user interface library. Xamarin.Forms 2.0, recently introduced as part of Xamarin 4, adds some new features and enhancements to help you build lightning fast apps.

Almost all apps have a list of data to show the user. As a result, the ListView is one of the most popular controls used in mobile apps. Xamarin.Forms 2.0 introduces a new caching strategy to maximize the performance of ListViews. 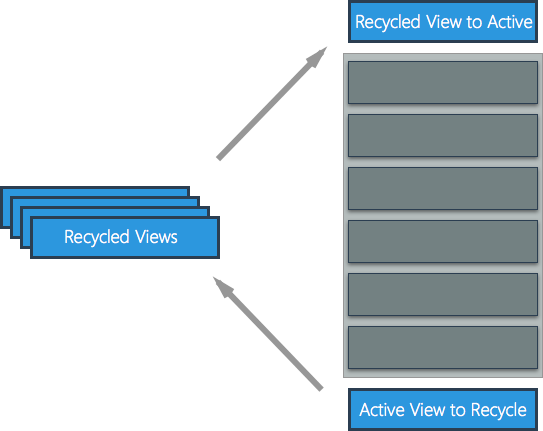 ListViews often have much more data to display than the limited number of cells the user can see at any given time. Creating potentially thousands of cells for each row of data could obviously lead to significant performance issues. iOS and Android have both included cell recycling mechanisms to help mitigate this issue by only keeping a small amount of cells in memory at any given time and recycling old cells with new data when the user scrolls to reveal new data. Xamarin.Forms 2.0 allows you take advantage of the native cell recycling mechanisms with its new caching strategy. There are two different options for cell reuse in Xamarin.Forms ListViews: RetainElement and RecycleElement.

RetainElement, the default behavior, generates a cell for each item in the list. This should be used in cells with a large number of bindings or if the template of the cell is frequently changed. Cell initialization code, such as laying out a cell, will run for each cell creation, resulting in a potential performance bottleneck. Because of this, RetainElement should generally be avoided when possible.

RecycleElement takes advantage of native cell recycling mechanisms on iOS and Android and, when used, will minimize memory footprint and maximize execution speed. RecycleElement should be used when cells have a small to moderate number of bindings, are similar in layout, and BindingContext contains all of the cell data. Enabling this performance optimization to make your lists lightning fast is as easy as passing one property into the ListView control’s constructor.

Xamarin.Forms already allowed you to build amazing UIs for iOS, Android, and Windows in XAML. Compiled XAML (XAMLC), introduced in Xamarin.Forms 2.0, allows for XAML to be compiled, rather than interpreted. There are several major benefits to using XAMLC. First, you’re notified of errors at compile-time rather than runtime, helping you catch markup errors faster and saving you time. Second, this reduces the size of your application by no longer bundling the .xaml files. Finally, XAMLC removes some of the load and instantiation time for XAML elements. XAMLC can be enabled at either the assembly and class level by adding the XamlCompilation attribute, allowing you fine-tuned control over what XAML is compiled.

If you wish to add compile-time checking to all the XAML contained within a particular namespace, include the assembly prefix to the XamlCompilation attribute to specify that the attribute applies to the entire assembly:

Indie Game Developers Get Xamarin for Free
Indie game developers have chosen C# and Xamarin to release some truly amazing mobile games, including Skulls of the Shogun, The Incredible Baron, Draw a Stickman, ...

Joseph Hill December 15, 2015
0 comment
Build Your Own Game Levels with CoinTime
Creating a game requires many different skill sets, from programmers who write the code dealing with movement, animation, collisions, and scoring, to designers who ...