To update now, use the Visual Studio > Check for Updates… menu in the IDE. If you aren’t using it yet, download it now:

This blog post summarizes the top changes in this release. You can check out the release notes to learn about all of the changes we’ve made.

This release of Visual Studio for Mac includes support for the User Secrets manager. The Secret Manager is a recommended practice for storing sensitive information such as API keys, passwords, and database connections during development. The information is stored in a JSON file outside of your project path, so you won’t accidentally check the information into a public repository. 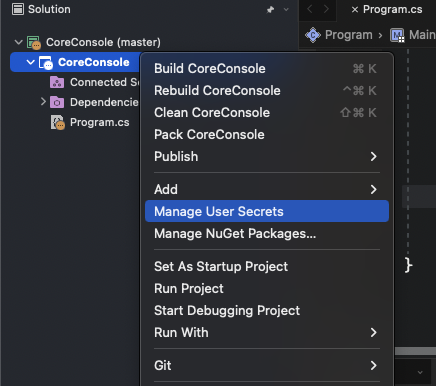 We’ve introduced several new code fixes that will improve your coding experience. Let’s take a look at a few of them, starting with a new code fix for invalid constraints.

There’s also a new refactoring that allows you to switch between top-level statements and the Program.Main style.

.NET has a new attribute called the StringSyntaxAttribute which allows you to tell the compiler what kind of data a string represents such as JSON, Regex, or DateTime. Visual Studio for Mac now supports syntax highlighting based on the type of data that the string represents.

Here’s an example showing syntax highlighting for a JSON string:

We’ve updated the Task Window and Regular Expressions dialog to native UI, which provides better integration with macOS and improved accessibility support. The Task Window was removed in 17.0 while awaiting the migration to native UI, and we’re happy to add it back in this release.

This release includes initial support for Individual AppStoreConnect accounts which are needed for non-Enterprise Apple Developers.

To add an AppStoreConnect account, open Visual Studio for Mac/Preferences and then select the “Apple Developer Accounts” item. In the “Apple Developer Accounts”, click the “Add Account” button and select “Add Individual Account” and enter the AppStoreConnect API Key information. Once the account is created, certificates and provisioning profiles can be accessed via the “View Details” button.

Today, we’re also shipping the first preview of our next release – Visual Studio 2022 for Mac v17.4. You can install this release side-by-side with the v17.3 release – if you already have a preview version of Visual Studio for Mac on your machine, you can use the Visual Studio > Check for Updates… menu to update to this next preview as well. You can also install it using the preview installer:

In this first preview, we’re including the following features:

The 17.4 Preview 1 release improves our preview support for .NET Multi-platform App UI, enabling you to build, deploy, and debug .NET MAUI apps on iOS, macOS, and Android. This release includes XAML Hot Reload support for changing your UI and seeing the changes reflected in your running app.

We’ve added support for the new scaffolder for ASP.NET Core Minimal APIs. This lets you quickly generate API Endpoints from a model class, with OpenAPI support and Entity Framework queries. 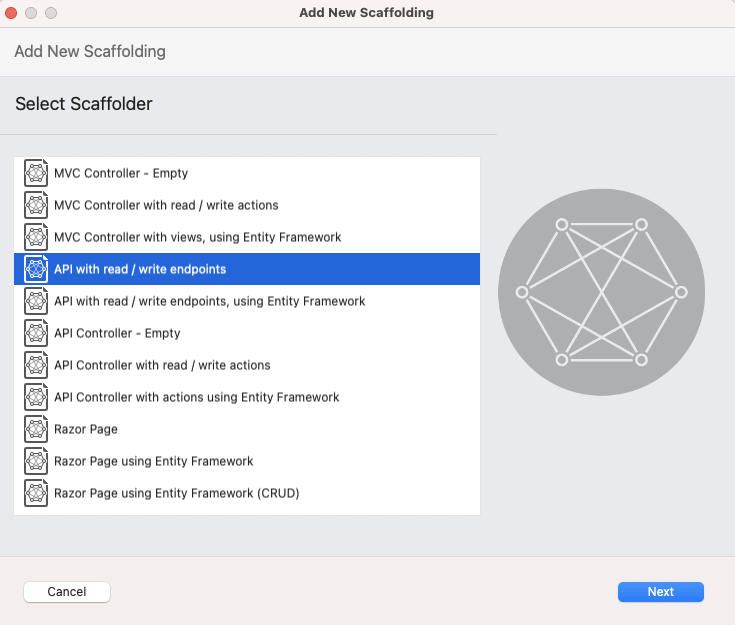 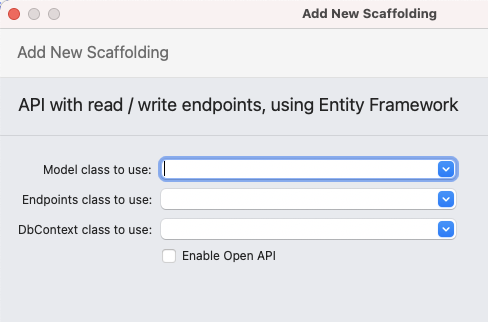 During Visual Studio debugging, the new Modules window lists and shows information about the DLLs and executables (.exe files) your app uses.

Please continue to share your thoughts and keep sending those suggestions or problem reports! You can use the Help > Report a Problem or Help > Provide a Suggestion menus to share feedback, or go to the Visual Studio for Mac Developer Community site to vote for your favorites.

VisualStudio.Extensibility: A New Way to Write Extensions
Last year, we announced the first phase of a new extensibility model for Visual Studio.  This new model will make extensions easier to write and more reliable along with...