Today in his keynote at BUILD, Jason Zander announced the availability of the .NET Framework 4.5 Developer Preview, Microsoft® Visual Studio® 11 Developer Preview and Microsoft® Team Server Preview.  If you are an MSDN subscriber, you can download the preview immediately via this link. For everyone else, Visual Studio 11 and Team Foundation Server 11 will be generally available starting at 10:00 AM PDT on Friday.

A key goal with the Visual Studio 11 release was to improve the developer experience by focusing on the tasks that developers do the most frequently. In our research, we found that many users weren’t discovering features that could make them most productive. To solve this, we streamlined our UI and enhanced high usage tool windows such as the Solution Explorer so that its easier than ever to discover and use the features that make you most productive.  Users also want to use search as a primary means of navigating their IDE and Solutions and so we’ve integrated search and made it more prominent in many places in the product.

One of the first changes that you’ll notice as you get started with Visual Studio 11 are the Simplified Toolbars.  In the image below, you can see that we’ve eliminated the clutter and ensured that you only ever need one row of toolbars to get your job done. This was accomplished by taking a hard look at each of the commands that was on the main toolbars and focusing only on the commands that are more frequently used on the toolbars. We also know that the most frequently used commands vary by user which is why we’ve made it easy to add commands back via the down arrow on the toolbar.

Many of you may already be familiar with the Productivity Power Tools which are a set of popular extensions to Visual Studio 2010.  One of the key themes in the Power Tools was to provide users with better search capabilities. Based on user feedback, we have taken the best of these features and fully-integrated them into Visual Studio 11.  The improved Solution Explorer (shown below) allows you to search and browse the relationships of types and members within VB, C# and C++ projects.  The new Find Control integrates the power of incremental search with a streamlined UI that ensures that your code remains front and center. Quick Launch is an integrated version of the Quick Access power tool that allows you to easily launch project templates, commands and options for a searchable UI that is always present on the main menu. We’ve also added search capabilities to the Toolbox and Add Reference Dialog. 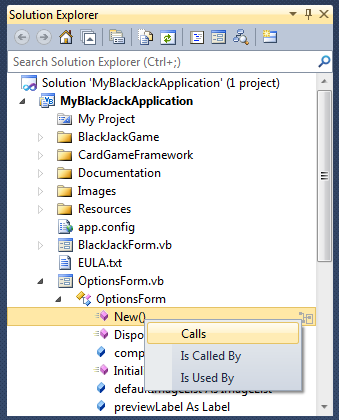 In past releases, evaluating a CTP or Beta took a bit of work as it required upgrading your projects to the new version. With this Developer Preview, we have introduced Project Compatibility which eliminates the need to upgrade most project types so that you can seamlessly work on the same solution using Visual Studio 11 or Visual Studio 2010 SP1.

Visual Studio 11 contains many more IDE enhancements than can be called out in a single blog post.  Over the coming weeks, stay tuned to this blog for more articles that talk about these features in depth and introduce some new ones.  I’d also like to highlight that each of the languages in Visual Studio have made significant improvements to their developer experience and the best place to learn about them is on their team blogs:

Your feedback is an important part of our software development cycle. We review every comment that we receive and are constantly using this feedback to improve the product.  If you encounter a bug or find something that doesn’t work as you would expect, please log on to Microsoft Connect and file a bug: https://connect.microsoft.com/VisualStudio.  If you have a suggestion for a great new feature addition, take a look at our User Voice site where you can vote on other user suggestions and add your own: http://visualstudio.uservoice.com/forums/121579-visual-studio.

Addressing Visual Studio performance
Visual Studio’s performance continues to be a hot topic for a lot of customers. We hear you and are investing to improve the performance of the product in those ...

Visual Studio Blog
September 16, 2011
0 comment
Visual Studio BUILD sessions and Tips & Tricks Cheat Sheet
As I settle back into my desk after an exciting week at BUILD, I wanted to send a reminder that all of the sessions should be available for streaming on https://channel9....