For problems that do not manifest in logs or that you cannot investigate by debugging locally you might attempt to capture a diagnostics artifact, like a memory dump, while the issue is active in your production environment. However, upon talking to developers and support engineers we know that memory analysis can be time consuming, complex, and requires a skillset that can take years to perfect.

Our new .NET analyzers have been developed to help identify the key signals in your memory dump that might indicate a problem with your production service. This blog post details how to use Visual Studio’s new .NET Memory Dump Analyzer to find production issues by:

Asynchronous (async) programming has been around for several years on the .NET platform but can been difficult to do well. There has been some confusion on the best practices for async and how to use it properly which has led to some antipatterns that may not reveal themselves until your service is under high load.

We talked to a bunch of support engineers and the “sync-over-async” antipatterns have a set of negative performance characteristics:

Of course, at this point, there are still a wide range of underlying causes that might be at the heart of your problematic service behavior. Our team wanted to make it easier for developers to find these kinds of issues and also identify where you might remediate the problem.

In pursuit of this goal, we have started developing a new .NET Diagnostics Analyzer tool to help developers, new to dump debugging, quickly identify (or rule out) issues we know impact customers in production environments, let’s look at an example.

Automatic analysis of a memory dump

Let’s assume the service has been exhibiting the symptoms we noted earlier (timeouts, slow response times, etc.), how do you go about validating (or invalidating) the possible root cause? 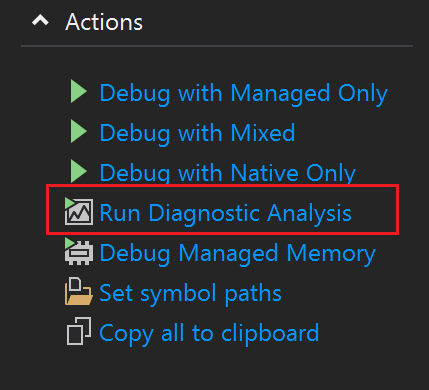 Selecting this action will start the debugger and open the new Diagnostic Analysis page with a list of available analyzer options, organized by the underlying symptom.

Selecting and executing analyzers against the dump

In my example I am concerned with my “app not responding to requests in a timely manner”. To investigate these symptoms, I am going to select all the options under Process Responsiveness as this best matches my app’s issue. 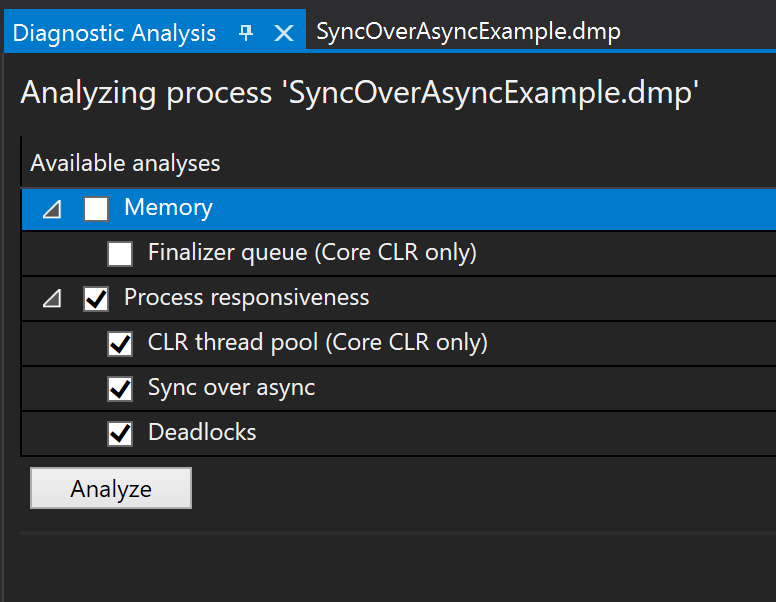 Hitting the Analyze button will start the investigation and present results based on the combination of process info and CLR data captured in the memory dump.

Reviewing the results of the analyzers

In the image below the analyzer has found two error results, and upon selecting the first result (“Thread pool is out of threads”) I get to see the Analysis Summary which is proposing that the “CLR thread pool is experiencing starvation”. This information is really important to an investigation, it suggests that the CLR has currently used all available thread pool threads, which in turn means we cannot respond to any new requests until a thread is released.

Selecting the second results “Thread pool is out of threads due to blocked async methods”, reveals the heart of the problem more specifically. By looking at the dump, the analyzer was able to find specific locations where we have inadvertently called blocking code from an asynchronous thread context, and this is leading directly to an exhaustion of thread pools.

The call out in this case is “Do not synchronously wait on Monitors, Events, Task, or any other objects that may block your thread. See if you can update the method to be asynchronous.”. My next job is to find that problematic code.

Navigating to the problematic code

By clicking on the Show call stack link Visual Studio will immediately switch to the threads that are exhibiting this behavior and the Call Stack window will show me all the methods that require further examination. I can quickly distinguish between my code (SyncOverAsyncExmple.*) from Framework code (System.*), and I can use this as the starting point of my investigation.

Each frame (or row) of a call stack corresponds to a method and by double-clicking on any of the stack frames I prompt Visual Studio to lead me to the code that led directly to this scenario on this thread. Unfortunately I do not have the symbols or the code associated with this application so on the Symbols not loaded page below I can select the Decompile Source code option. 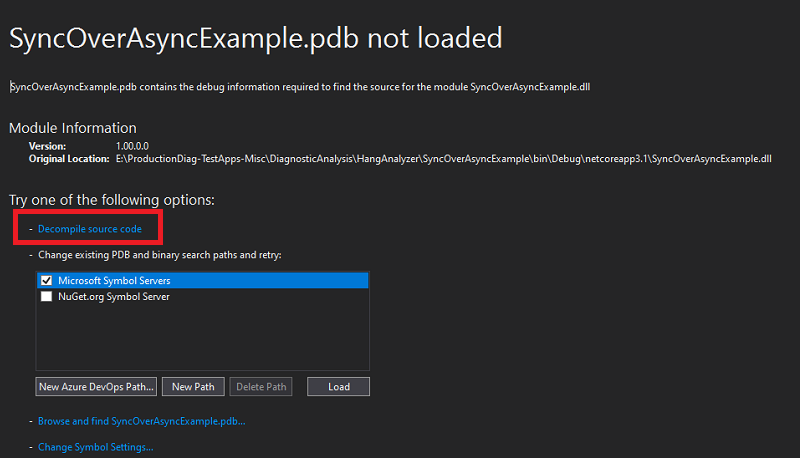 In the decompiled source below it is clear to me that I have an asynchronous Task (ConsumeThreadPoolThread) calling a function (DoSomething) that contains a WaitHandle.WaitOne method, which is blocking the current thread pool thread until it receives a signal (exactly what I want to avoid!). So to improve the responsiveness of my app I have to find a way to remove this blocking code from all asynchronous contexts. 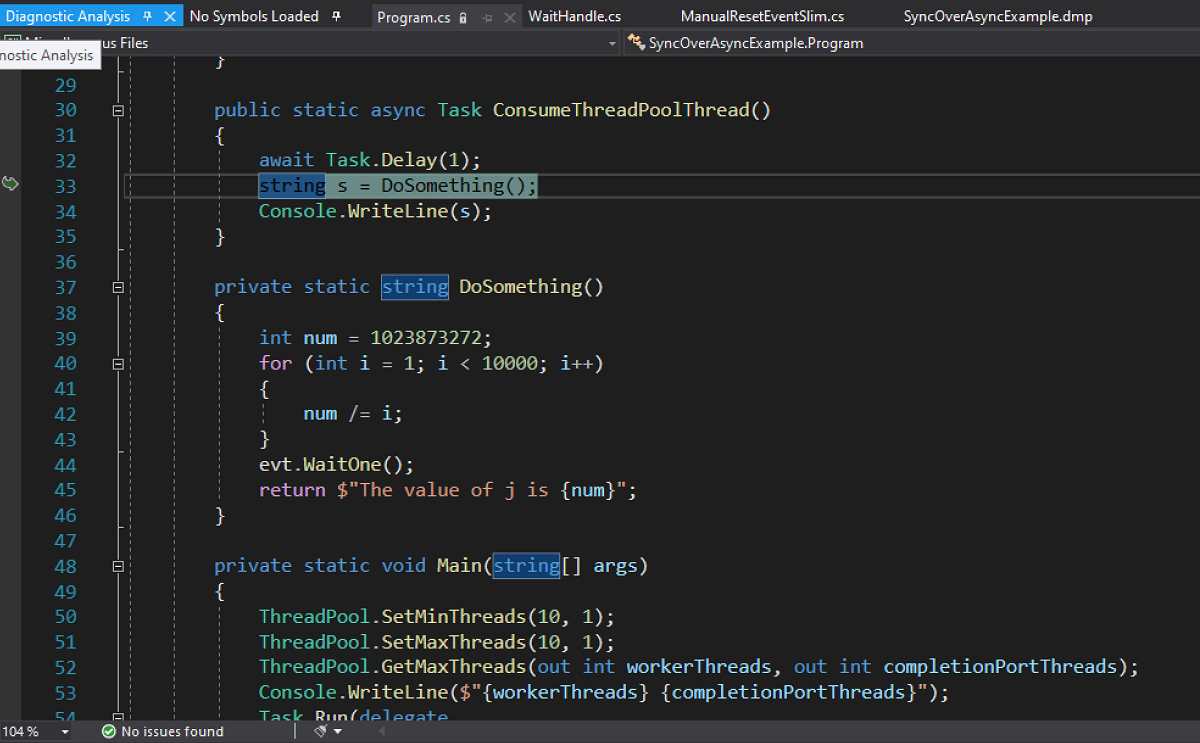 Check it out now!

The new .NET Memory Analyzer tool makes it easier for developers and support engineers to get started debugging and diagnosing issues in memory dumps, allowing them to quickly root cause issues in production environments.

We currently support the following Analyzers with new and improved analysis coming in the very near future:

We believe there are many more problematic issues that can be quickly confirmed by using dump analyzers and we are hoping to get community feedback on which ones are the most important to you.

Please help us prioritize which analyzer to improve and build next by filing out this survey!

Visual Studio 2022
All of our product development begins and ends with you—whether you posted on Developer Community, filled out a survey, sent us feedback, or took part...

Amanda Silver
April 19, 2021
429 comments
The Visual Studio family welcomes you at Microsoft Build 2021
Come join us at Microsoft Build, our largest developer conference, to explore what’s new in tech. This year, Build will be kicking off at 8:30 AM Pacific Time on ...