Coral reefs form home for an estimated 25% of all marine life incorporating more than four thousand species of fish and over a million other aquatic species that live, breed, and are dependent on coral reef ecosystems during their lifetime [1]. This number is significantly important if we consider that coral reefs form just under 0.1% of the oceans’ surface area. In addition, almost half a million people are dependent on coral reef ecosystems as they provide protection for coastal infrastructure and prevention from storms, tsunamis, and floods; they are sources for medicine, fishing, and tourism activities.

Great Barrier Reef located in the Coral Sea, off the coast of Queensland, Australia, is the world’s largest coral reef system identified to be one of the seven natural wonders on Earth. Unfortunately, the reef has already lost over half of the reef’s coral cover between 1995 and 2017, especially with the effects of widespread bleaching outbreak events that took place in 2016, 2017, and with the latest bleaching event taking place in the summer of 2020. 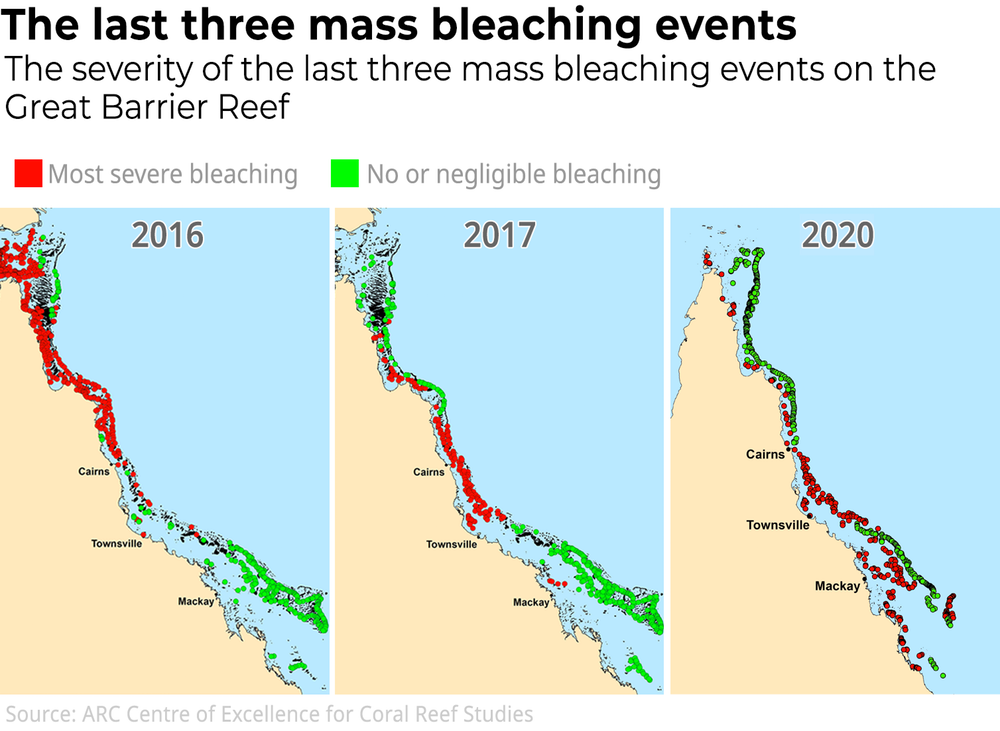 What is coral bleaching?

Corals are animals with a polymorphic structure. They have a calcium carbonate skeleton that lives in a symbiotic relationship with a type of algae called “zooxanthellae”  in their tissues which provides the essential nutrients to corals. 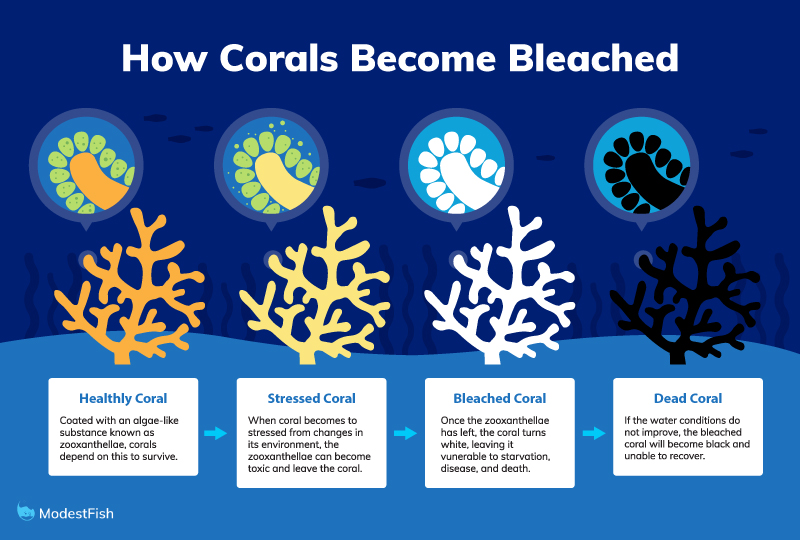 Human activities have caused average global temperature to rise about 1°C above pre-industrial levels, causing marine heatwaves and triggering more frequent and more severe mass bleaching events. In February 2020, the Great Barrier Reef was subjected to the hottest sea surface temperatures since records began in 1900, leading to one of the most widespread bleaching events.

Monitoring coral reefs at scale is costly, time-consuming, and complex. Current technology practices for monitoring coral reefs’ health and for inspecting coral bleaching events use various sources for data and image collection including satellites, airborne and ship-based mediums such as sonars, and performance of visually inspected underwater surveys. While satellite-based remote sensors have been quite popular for large scale coral reef monitoring they are limited by weather conditions (e.g., cloud, snow, fog), aerial pollution, and camera resolution not being able to provide finer granularity detail of the coral reef ecosystems and their benthic conditions at greater water depth. For example, in Australia, due to the scale of the Great Barrier’s Reef ecosystem, the resolution of images from satellites is not always satisfactory in order to analyse the coral bleaching events and monitor their state. On the other hand, divers required for underwater surveys have limited capacity in covering ground and study the reef ecosystem at its full scale. In fact, only 0.3 % of the Great Barrier Reef has been surveyed by divers.

An Innovative Approach based on UASs & Machine Learning

Researchers at the Queensland University of Technology (QUT) have been exploring the use of unmanned aerial systems (UASs) as a cost-efficient monitoring medium for coral bleaching inspection and surveillance of the Great Barrier Reef in Australia.

The researchers combine in-water spectral observations and automated classification techniques to determine levels of benthic cover and coral growth in shallow water reef regions [5]. In practice Felipe Gonzalez’s research team use AI and ML techniques to interpret images captured by hyper-spectral cameras mounted on drones, to monitor and collect information about the health of the reef. Their methodology covers three different phases as depicted in the workflow diagram below: 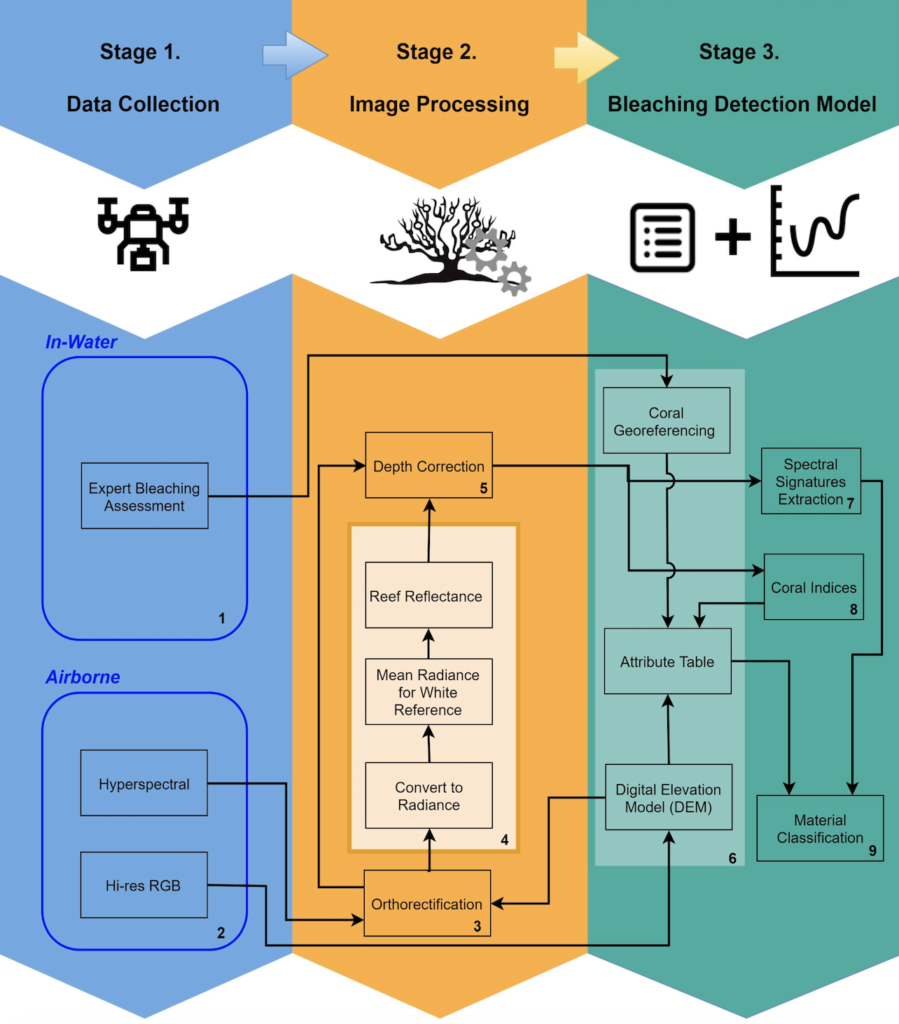 Data processing has taken place using Microsoft Azure cloud services as part of the Microsoft grant scheme providing the resources for scaling up the data and machine learning processing. The majority of the data collected has been hosted in the cloud where ML techniques are being applied to the gathered datasets focusing mostly currently on classic SVM (support vector machine) algorithms for image recognition and classification using both supervised and unsupervised methods. In addition, with Microsoft Azure grant the QUT Research group was able to scale the data processing and bleaching detection analysis of up to four coral reefs. QUD is currently under the completion of the data processing analysis this year and we are looking forward to investigating into further ML model analysis techniques such as reinforcement learning based on a combination of new in-water survey data points.

Measuring the carbon impact of web browsing
Search, simple click, simple letter typed in the search box have an impact on the environment when browsing Internet. Under Windows, the user spends on average 60...