Do you want to be powered-by renewables? The answer is no.

This post will answer that question. By answering this question, you will understand the part software engineers play in the epic transition of the entire world to low carbon electricity.

There are 8 principles to sustainable software engineering, I encourage you to read them all on the website principles.green. To summarise the first 3 principles:

The question isn’t why is Microsoft pushing for 100% supply of renewable energy by 2025, it’s how? To answer this question, we need to cut a clear distinction between being powered-by renewables and being matched-by renewables.

Powered-by means you are directly powered by a renewables plant, say a hydro dam. The electrons flowing into your device only come from that renewable source.

Another way to describe this is being “off-grid”. For most people, we live on an interconnected grid, with many producers pumping electricity in and many consumers taking electricity out. Being part of the grid means you are part of this giant interconnected machine. It also means the electrons coming into your device are a mixture of all the electrons going into the grid. Suppose the grid only has 5% of wind supply at the moment. You are getting 5% of wind-generated electrons and 95% of fossil fuel generated electrons. 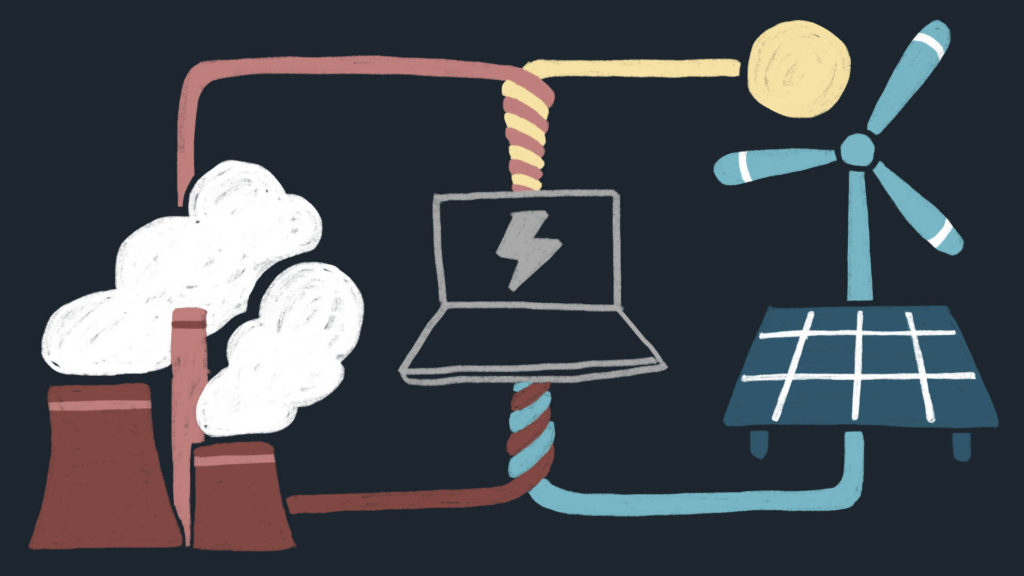 There are many advantages to be on the grid. You don’t need to build things near power stations if you suddenly need a lot of energy in a short period, it’s there. There are also disadvantages to being on the grid, some grids are running on very old antiquated systems and have frequent outages. The solution isn’t to go off-grid, it’s to fix the grid.

If what we are doing isn’t a solution for everyone, if it isn’t a stepping stone to a future where everyone has access to low carbon energy, then it’s not a solution at all.

Going off-grid, powering a data center directly by renewable energy might make you happy and somewhat guilt-free. But if you can’t find a path from that to a future where everyone is living off renewable energy, then it’s not a climate solution.

Being matched-by renewables is different. It means staying on the grid and helping transition it to a grid powered mainly by renewables, for everyone.

In our 2030 carbon-negative announcement Microsoft clearly defined what we meant by 100% supply of renewable energy.

“By 2025, we will shift to 100 percent supply of renewable energy, meaning that we will have power purchase agreements for green energy contracted for 100 percent of carbon-emitting electricity consumed by all our data centers, buildings, and campuses.”

To be clear, Microsoft was not starting at 0. We had already reached 60% renewables sourcing for our data centers by 2020. The 2025 target broadened the scope of our commitments from just data centers to everything, our campuses, our buildings, and even our busses. We had achieved our current goals and planned to meet our new goals, not by being powered-by renewables but matched-by.

PPAs are typically very long-term contracts. With one of these agreements in hand, a plan for a renewables plant can find financing to build itself since it already has a buyer for its electricity for many years. PPAs drive the creation of renewable power plants.

At Microsoft, we have a policy of additionality. We will only purchase a PPA if it adds renewable energy to the grid. If a PPA is from an existing renewables plant, we won’t buy it.

We don’t buy PPAs to make sure the electrons entering our data centers only come from renewable plants. We buy PPAs to increase the amount of renewable energy available to everyone. It’s a solution that gets us towards a future where everyone has access to 100% renewable energy.

What’s in my electricity?

As a software engineer, what this means is that even if you are running on a data center that is 100% matched-by renewables, you are still probably consuming electricity created by the burning of fossil fuels.

Don’t take this as a sad fact; this is empowering.

By understanding electricity, you open the door to a world of possibilities for reducing carbon emissions.

These ideas are discussed in more depth in the 2nd principle of sustainable software engineering build applications that are energy-efficient, and the 3rd principle consume electricity with the lowest carbon intensity.

So the answer to the question “Does a 100% supply of renewable energy make computing guilt-free?”, is always no. If you are being powered-by renewables then you are off-grid which doesn’t help the world transition to a renewable-powered future. If you are matched-by renewables then the electricity powering your computer comes from fossil fuel sources, however, it also means the actions you take as a software engineer can help reduce the consumption of that fossil fuel energy and help transition everyone to a renewable future.

Network Optimization for Sustainable Software Engineering
Designing network infrastructure upfront can reduce customer’s carbon footprint as well as the carbon footprint of their cloud provider. This also represents a paradigm shift in how cloud services are designed, planned, and deployed. Just like designing with accessibility in mind became a common software development life cycle.

Alex Bitiukov
September 7, 2020
0 comment
Measuring Your Application Power and Carbon Impact (Part 1)
Overview of using the built in Energy Estimation Engine to estimate the carbon impact of your application.