This week, we’re excited to announce some big updates to TwoPaneLayout, our Jetpack Compose component for foldables and large screens.

We’ve just added a new TwoPaneLayout constructor with highly customizable navigation support, and the TwoPaneScope interface has been upgraded to provide more information while also protecting access to its fields and methods. These changes were substantial enough that we decided to bump to TwoPaneLayout version 1.0.1-xx, so now TwoPaneLayout 1.0.0 is the last version that still uses the old API.

To see examples of how to use and migrate to the newest TwoPaneLayout version, check out the documentation, library samples (TwoPaneLayout and TwoPaneLayoutNav), and the Surface Duo Compose samples. 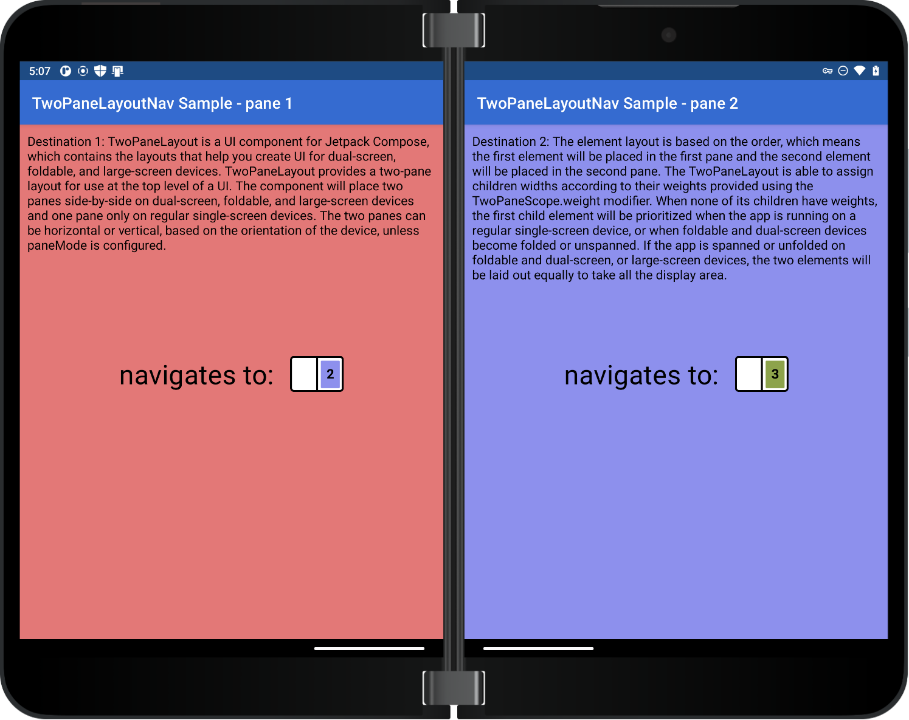 TwoPaneLayout now offers the TwoPaneLayoutNav constructor, which is meant to be used in scenarios with complex navigation. We originally started looking into this idea after receiving some feedback on GitHub, and we eventually decided that a new constructor would be the best solution:

If we look inside the implementation of TwoPaneLayoutNav, we can see that the code is very similar to TwoPaneLayout when only one pane is shown. We still use a NavHost in the SinglePaneContainer, but now it contains multiple destinations instead of only two.

The main difference in implementation is within the TwoPaneContainer, because now we have to keep track of the routes for the current pane 1 and 2 destinations. These routes are used to access the content that will be shown in each pane of the layout.

The new TwoPaneLayout version also includes updates to TwoPaneScope and the addition of TwoPaneNavScope. In addition, we’ve added new test scope instances to help with handling the API changes in UI tests.

Previously, TwoPaneScope was only used to provide access to the weight modifier attribute, while the navigateToPane1 and navigateToPane2 methods were accessible anywhere. Now, to ensure that certain methods and fields can only be accessed from within the proper scope, we’ve updated the TwoPaneScope interface to the following:

So for instance, let’s say your app code looked something like this:

With the new TwoPaneLayout version, navigateToPane1 and navigateToPane2 can now only be called within TwoPaneScope, so you would need to update your code to this:

Regardless of the API changes, the navigation functionality remains the same, as shown in this animation:

There also are additional fields available for use in your apps:

To help you use the new TwoPaneLayoutNav constructor, we’ve also created a new interface called TwoPaneNavScope:

Since the TwoPaneLayoutNav constructor doesn’t limit you to only two destinations, navigateToPane1 and navigateToPane2 don’t make sense for internal navigation support anymore. Instead, we’ve provided a navigateTo method with the following parameters:

For example, this animation shows how our TwoPaneLayoutNav sample uses navigateTo to set up a navigation pattern that works well regardless of how many panes are displayed:

Due to the changes described above, some composables may now require TwoPaneScope or TwoPaneNavScope to be explicitly specified as receivers. When writing your application code, this is not an issue because TwoPaneLayout provides an internal implementation of the necessary scope. However, when writing UI tests to test composables in isolation, you may find yourself trying to invoke a composable outside of TwoPaneLayout.

For instance, in the TwoPaneLayout sample, the top bar composable requires TwoPaneScope to decide what text to show:

When trying to write a UI test just for this composable, though, Android Studio will show you this error:

To solve this problem, we’ve added empty implementations of both scopes: TwoPaneScopeTest and TwoPaneNavScopeTest. These both allow you to manually set the value of scope fields in the constructor so you can set up your composables with the proper state before running your UI tests.

For instance, this is the top bar test updated with TwoPaneScopeTest:

Get started with version migration

By this point in the blog post, I hope you’re convinced that the new TwoPaneLayout version is worth a try 😊 If you were already using TwoPaneLayout before and want to migrate to the newer version, follow these steps:

The code for TwoPaneLayout is available on GitHub.

Finally, please join us for our dual-screen developer livestream at 11am (Pacific time) each Friday – mark it in your calendar and check out the archives on YouTube.

Responsive layouts in Flutter with TwoPane
Welcome to another Flutter update. This time we will dive into TwoPane, tell you how to get it from pub.dev and focus on the types of layouts you can build with it. ...