Dave is a Windows PowerShell MVP and a member of the board of directors at PowerShell.org. He works in IT, and he mainly focuses on automation, configuration management, and production support of computers running the Windows Server operating system and point-of-sale systems for a large retail company.

Take it away, Dave…

These examples worked until Windows PowerShell 3.0 was released. If you tried to run them after that, they would not work. I can’t tell you how many times I’ve seen people asking questions about why the code based on these examples doesn’t work. This week, we released updated versions of these topics on TechNet because people still seem to be interested in writing GUIs.

I’m not going to spend a lot of time talking about most of the code in these examples. I’m going to focus on why they stopped working, and discuss some other cleanup I did on the code. The main reason they no longer work has to do with variable scope. All four examples had code similar to this:

This line assigns a script block as an event handler for the button’s Click event. When the button is clicked, the results of $objTextBox.Text are assigned to variable $x, and the form is closed. However, this variable assignment is local to the script block. It doesn’t modify any variable named $x in the parent scope where the rest of the code is running.

There is a very quick-and-dirty way to “fix” these scripts. You can change the variable assignments to use a scope modifier, for example:

However, I decided to clean up these scripts a bit, and I took a different approach. You can see the complete scripts on GitHub: WinFormsExampleUpdates. Here’s a summary of the changes I made:

Here’s the end result of the first example (a custom input box): 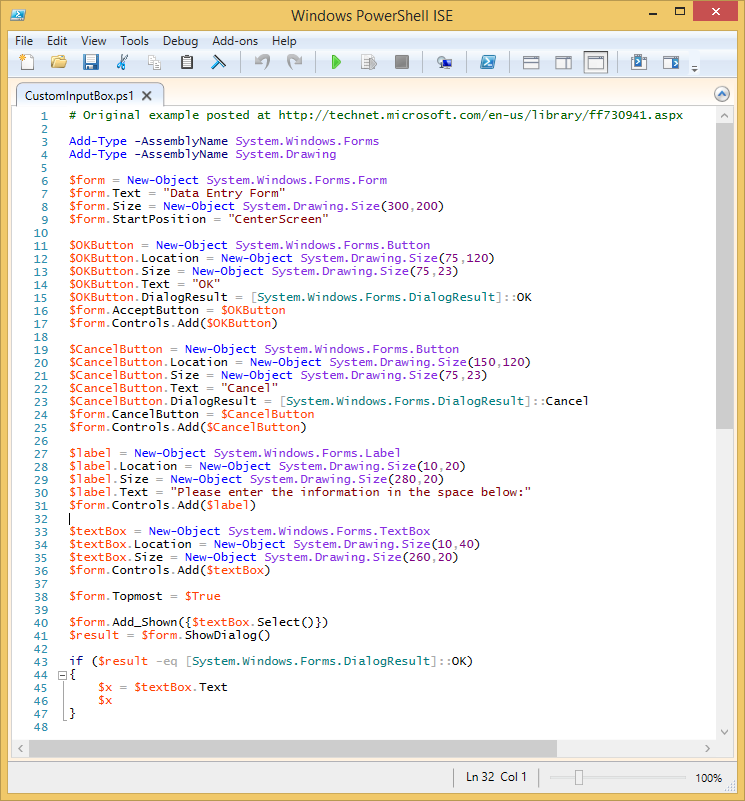 If you’d like to read the updated Windows PowerShell GUI-building topics on TechNet, they’re right here:

Thanks to Gaby Kaplan on the documentation team for updating the topics on TechNet.

Thank you, Dave, for taking time to share your time and knowledge.