Using a Tuple in PowerShell

Summary: Learn how to use a Tuple in Windows PowerShell

Hey, Scripting Guy! I read your article from yesterday, so I know about Tuples. How do I actually use one?

Microsoft Scripting Guy, Ed Wilson, is here. I just got back from working out with my trainer. I am not nearly as sore today, but then there is always tomorrow. Anyway, I decided to drink a protein shake and a glass of water now. I will have tea later with my mid-morning snack. I grabbed my Surface Pro 3, and I am quickly checking my email to scripter@microsoft.com.

Note  For a good introduction to Tuples, read What’s a Tuple, and Why Would I Want to Use It?

A two element Tuple is called a 2-tuple, or a pair*. The way I create it is to use the Create static method from the System.Tuple .NET Framework class, and specify two elements. Here is an example of creating a pair:*

To access the two elements, I use parameter replacement and the Format (-f) operator. I specify each element (beginning at 0) with a pair of curly brackets. On the other side of the format operator, I specify the tuple element (item number).

To use the tuple, I use parameter replacement and the Format operator. Here is an example:

The image that follows illustrates creating a 2-tuple (pair) and accessing each of the elements. 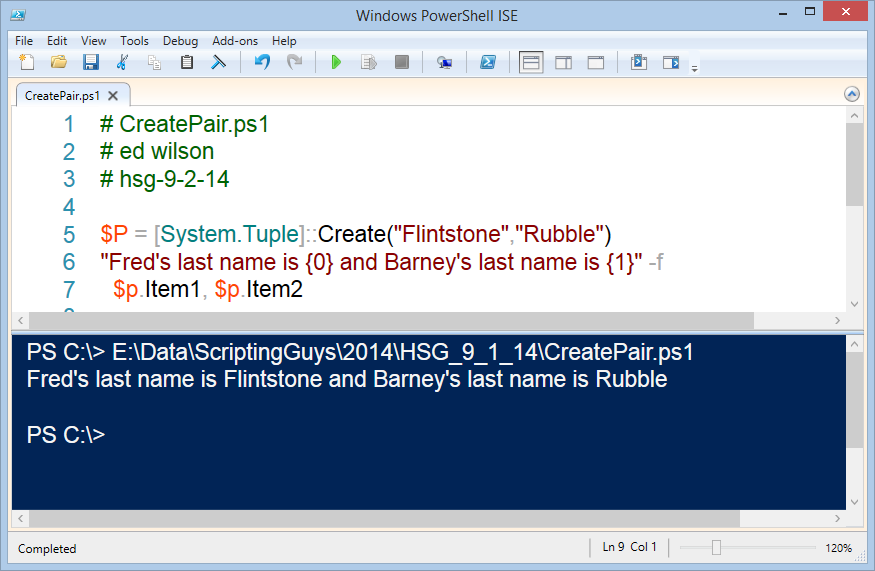 Here is an example of running the script, and the output produced by the script: 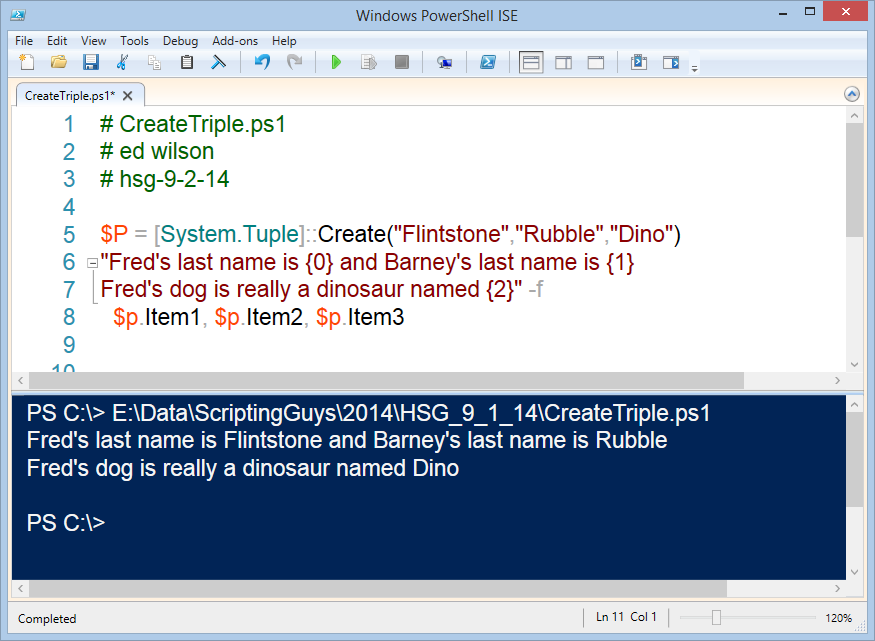 I can create a tuple with more than eight elements by using the Rest*** property. I do this by creating a nested tuple in the eighth element. When I reference the elements stored in the **Rest property, I do so with a double type of attribution: $T.Rest.Item1.Item3. My new tuple is stored within Item1 of the Rest *property. Here is an example of how to do this:

The script and output from the script are shown here: HD, that is all there is to using tuples with Windows PowerShell. Join me tomorrow when I will have a guest blogger, Windows PowerShell MVP, Joel Bennett, talk about tuples and their differences from other data structures.