Use Tab Expansion in the PowerShell ISE to Avoid Cmdlet Aliases

Summary: Learn how to use Tab Expansion in the Windows PowerShell ISE to avoid using cmdlet aliases and to add complete parameter names in commands.

Hey, Scripting Guy! I spend a decent amount of time working with scripts, and I would like to learn how to use the Windows PowerShell ISE more effectively. I have heard that I should not use aliases in scripts, but it just takes too long to type out full cmdlet names—after all, some of the cmdlet names are ridiculously long and hard to type. I notice that you seem to use complete cmdlet names, do you have a secret, or are you just a really good typist?

Note   This is the fourth blog in a series about using the Windows PowerShell ISE.

For example, the following code works just fine; but it contains a number of aliases, and it is not a good practice to have these in a script.

I run this code to ensure that it works. It does, and both the code and the output will appear in the output pane (because I have not saved this script yet). I then use the Remove-AliasFromScript function (loaded with my Windows PowerShell ISE profile) to remove all the aliases from the script.

The newly created script (without any aliases) appears in a new Windows PowerShell ISE script pane as untitled5.ps1. When I test it and decide I like the new script, I can save it with the name of my choosing. In the image that follows, you can see the original code (in the output pane), the output associated with the script, the Remove-AliasFromScript command, and the revised script in the new script pane. 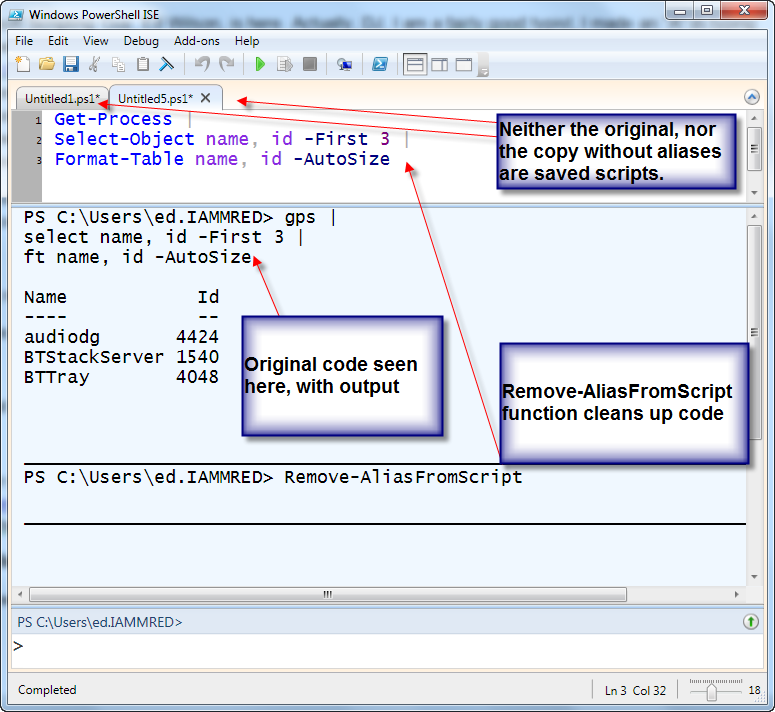 Well, suppose that you do not want to use my Remove-AliasFromScript function. How do you avoid typing lots of long cmdlet names? The secret is to use the Windows PowerShell ISE Tab Expansion feature. Tab Expansion does not expand aliases, so if you type gps an alias for the Get-Process cmdlet, it will not resolve gps to Get-Process (that is what my Remove-AliasFromScript function does).

Note   Keep in mind that these examples for using Tab Expansion all depend on what modules, cmdlets, version of Windows, and roles are installed. When you have lots of cmdlets available, the usefulness of Tab Expansion begins to bog down.

Tab Expansion also works for parameters. One thing that my Remove-AliasFromScript function does not do is add in missing parameters to commands. The use of parameters is essential to learning how Windows PowerShell actually works. When I was first learning Windows PowerShell, there were many times when I thought that my pipelined input was supplied to a particular parameter, only to learn later that the pipelined input was going somewhere else. At other times, I would see a command fail, such as the one that is shown here, and I wondered why it did not work.

Later, I would discover a command that works, such as the one shown here.

The command to start Notepad, get all instances of Notepad, and then stop a specific instance of Notepad is shown in the image that follows.

If you find a parameter you want, but you accidently go past it, you do not have to continue to cycle through all of the available parameters. You can hold down the Shift key <shift> and press the Tab key, and it will cycle backwards. This allows you to come back to a parameter you may have missed in the cycle. This Shift + Tab technique also works when using Tab Expansion for cmdlet names.