Use PowerShell to Replace netdom Commands to Join the Domain

Summary: Learn how to replace netdom commands with simple Windows PowerShell cmdlets to rename and reboot the computer or join the domain.

Hey, Scripting Guy! It seems that I have been hand building a number of computers recently for a computer lab we are setting up at work. I have written a batch file that uses netdom commands to join the domain. I also use a netdom command to rename the computer, and the shutdown command to restart the computer. The syntax for each of these three commands is rather complex and convoluted. A strange thing is that it seems I can do this on Windows Server R2, but I cannot do this on Windows 7. What gives?

Microsoft Scripting Guy, Ed Wilson, is here. Well this afternoon I am drinking something a bit different. I decided to make a cup of masala chai. (The word chai, or many of its variations, simply means tea in many languages. Therefore, to speak of chai tea is redundant.) Anyway, I decided to use Dajarling tea, brewed a little strong, and I added cloves, cardamom, a cinnamon stick, fresh ground pepper, and 1/3 cup of warm milk. Coupled with an Anzac biscuit, it was quite nice.

AD, the reason that you cannot use your batch file (containing netdom commands) on Windows 7 is that by default Windows 7 does not contain the netdom command. You can add netdom to your computer running Windows 7 by installing the latest version of the Remote Server Administration Tools (RSAT). When it is installed, you still need to go to Programs and Features and turn on the tools you want to load. The RSAT tools are great, and that is where you gain access to the Active Directory module. But you should not load the RSAT only to access netdom, because you can do what you want to accomplish out of the box (assuming that your box is not Windows 7 Home edition that does not join domains).

AD, your batch file contained at least three commands to rename the computer, join the domain, and to restart the machine. The two netdom commands and the shutdown command are shown here.

In the first command, I use the Get-WmiObject cmdlet to retrieve the <a href="http://blogs.technet.com/controlpanel/blogs/posteditor.aspx/Win32_ComputerSystem” target=”_blank”>Win32_ComputerSystem Windows Management Instrumentation class. (The Get-WmiObject cmdlet has an alias of gwmi, and it will also take credentials if required.) Because this class returns only one instance, I can use my group and dot trick (see My Ten Favorite Windows PowerShell Tricks) to directly call the Rename method to rename the computer.

After I rename the computer, I use the Add-Computer cmdlet to join the computer to the domain. The Add-Computer cmdlet allows me to specify the credentials that have rights to add computers to the domain, in addition to the name of the domain to join. Although I did not do it in my example, there is also an ou parameter that allows you to specify the path to the OU that will contain the newly created computer account.

The last command, Restart-Computer, appears without any parameters. This means that the computer will restart within one minute, and it will attempt to cause processes to politely exit (generally a good thing). For emergency type of situations, there is the Force switch that will cause the computer to immediately restart, and not wait on processes to politely exit. The use of this optional parameter can lead to data loss in some situations.

In the image that follows, I first use the Get-WmiObject cmdlet to rename the computer. The image shows the return value is 0, which means that the command completed successfully. Next, I use the Add-Computer cmdlet to join the computer to the iammred domain by using the administrator credentials. Upon hitting ENTER, a dialog box appears that requests the password for the credentials.

The command completed successfully, but a warning message states that a reboot is required for the change to actually take place. The last command shown in the image uses the Restart-Computer cmdlet to restart the computer. I added the WhatIf parameter to illustrate what happens when using the WhatIf parameter (and to permit myself time to make the screenshot). 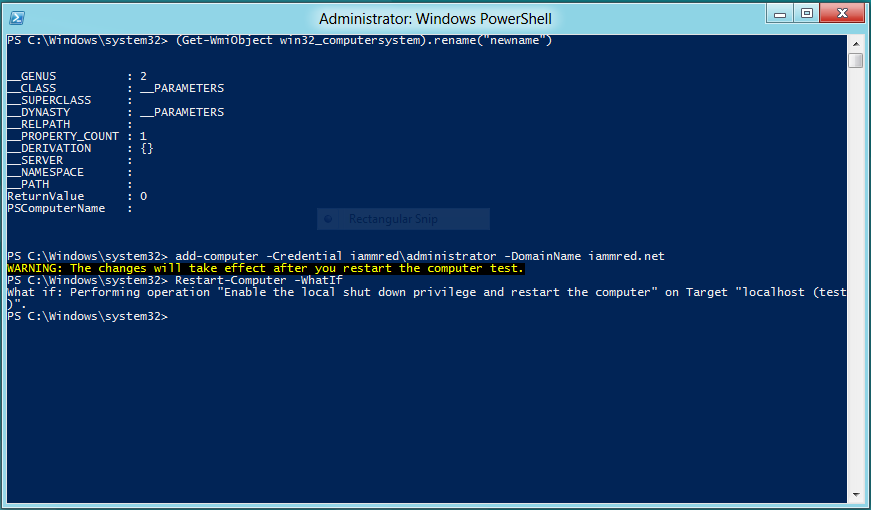 After I remove the WhatIf switch, and rerun the Restart-Computer cmdlet, a message box appears that states the computer will shut down in a minute or less. After the quick reboot, I am able to switch from using a local account to a domain account, because the computer has now joined the domain. The commands are short, sweet, easy to remember, and easy to use. None of these commands require a script, in fact, they could easily be run as imported history commands. For more information about working with the Windows PowerShell history cmdlets, see this collection of Hey, Scripting Guy! blogs.

The Easy Way to Use PowerShell to Move Computer Accounts
Summary: Use the Active Directory module and Windows PowerShell to move computer accounts.  Hey, Scripting Guy! I need to figure out a way to manage computer ...

Doctor Scripto
March 1, 2012
0 comment
Use PowerShell to Reset the Secure Channel on a Desktop
Summary: Learn three ways to use Windows PowerShell to reset the computer secure channel.  Hey, Scripting Guy! We have a problem with the computers in our computer ...