Use PowerShell to Remove Personal Information from Excel

Summary: Learn how to use Windows PowerShell to remove personal and other information from Microsoft Excel workbooks in this Scripting Guys article.

Hey, Scripting Guy! At times, I really hate where I work. It seems everyone is always scared. They are scared to say what they really think in meetings, they are scared to make decisions, and they are scared to talk to one another. The term walking on eggshells comes to mind; it might be a neat trick, but after a while, it begins to make your arches ache. Management has absolutely no vision, no strategy, and no leadership. It might be a result of having had three layoffs in the last six months, but I believe the general malaise had crept into our culture long before that—the layoffs are, in that regard, merely symptomatic. When you combine scared with no strategy, you get reactivity. We are constantly being pulled in one direction, and then we are told to drop everything and reverse directions. It is as predictable as the tides, and as changeable as the Bay of Fundy. This would be bad enough in a normal company, but in our organization, it is nearly intolerable.

To make matters worse, I feel certain that if I miss something, I will be fired. Is this something that can be scripted?

Microsoft Scripting Guy Ed Wilson here. Dude (or dudette), I feel depressed for you. I am glad I do not have to work in such an environment (I absolutely love working for Microsoft because we are the complete opposite of everything you described). I can understand what it would be like because I have been there. Unfortunately, I cannot solve all your problems, but I can at least help you with this latest flail.

EC, in Microsoft Excel 2010, the Info tab in the File menu shows the metadata associated with a Microsoft Excel file. On the far right side of the following image, you can see the properties such as title, tags, and comments. If you were to scroll down, you could see additional values. Most of these properties can be directly edited from this location. The error that is generated the first time the script runs without loading the Excel interop assembly is shown here:

As you can see, nothing about a missing assembly is indicated. The only clue is the part about an incorrect parameter. It does not understand our $xlRemoveDocType::xlRDIAll command. Once again, the strange thing is that the syntax we used to create the type is exactly the same as the syntax that was used yesterday.

When troubleshooting a script such as this, it is important to keep in mind the feature of dynamically loading assemblies, and—as you narrow down the problems that need to be fixed—to close and to re-open the Windows PowerShell ISE. I do not know of a way to unload an assembly after it has been loaded, assuming that I had figured that out in the first place. When you make some inconsequential change to a script, run it, and it works, you tend to think, “It is fixed.” Save it, close it out, or share it with someone else, and—it does not work for them.

The command to load the Microsoft.Office.Interop.Excel assembly is shown here:

The RemoveDocumentInformation method accepts an enumeration value to tell it which document information to remove. The XlRemoveDocInfoType enumeration specifies 17 different things that can be removed. The enumeration names and values can be obtained by using a script such as the Get-xlConstantAndValue.ps1 script.

The output from the Get-xlConstantAndValue.ps1 script is shown here:

The Get-ChildItem cmdlet is used to retrieve all the Microsoft Excel workbooks in the folder. Next, the excel.application object is created, and the visible property is set to false. This is shown here:

All of the files are collected in the $excelFiles variable, and each workbook is opened. A string is displayed that indicates the fullname of each file that is being processed. This is shown here:

The part of the script, that is unique to this particular operation is the RemoveDocumentInformation method call. This method is present on a workbook object and it accepts an instance of the previously mentioned xlRemoveDocInfoType enumeration. After this method is called, the workbook needs to be saved and closed. This is shown here:

The script will then loop back around to the next Microsoft Excel workbook in the collection. After all the files have been processed, the quit method from the excel.application object is called:

When the Remove-ExcelDocumentInformation.ps1 script runs, the following output is displayed. 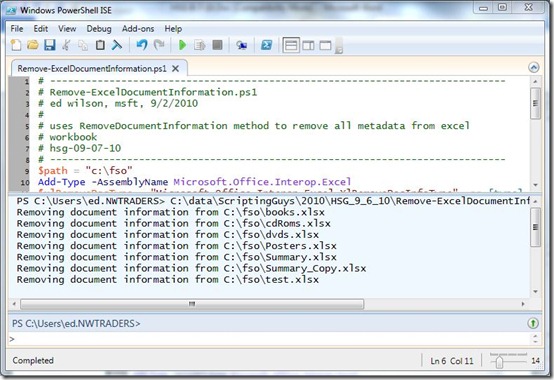 We invite you to follow us on Twitter and Facebook. If you have any questions, send email to us at scripter@microsoft.com, or post your questions on the Official Scripting Guys Forum. See you tomorrow. Until then, take it easy.

Copy Data from One Excel Spreadsheet to Another with PowerShell
Summary: The Microsoft Scripting Guys show you how to copy data from one Microsoft Excel spreadsheet to another one by using Windows PowerShell.   Hey, ...

ScriptingGuy1
September 8, 2010
0 comment
Copy CSV Columns to an Excel Spreadsheet by Using PowerShell
Summary: Join the Microsoft Scripting Guys as they show you how to copy CSV columns to a Microsoft Excel spreadsheet by using Windows PowerShell.   Hey, ...