Use PowerShell to Monitor and Respond to Events on Your Server

Summary: Learn how to use Windows PowerShell to monitor and to respond to events on your computer or server without the need to run a script.

Hey, Scripting Guy! I am interested in learning how to use Windows PowerShell to create a Windows Management Instrumentation (WMI) permanent event consumer. Basically, what I need is a script that will monitor a particular service and if the status of that service changes I need the script to launch a script that will perform a specific action. Is this something I can do with Windows PowerShell, or do I need to compile a Managed Object Format (MOF) file? Everything I can find on the Internet says I need to use a MOF file, but I do not like MOF files and would rather use a Windows PowerShell script so I can create these permanent event consumers on a remote machine.

Hello CD, Microsoft Scripting Guy Ed Wilson here. You are absolutely correct. There are two cool things about creating permanent event consumers via script. The first thing is that it can easily be performed remotely. Therefore,, I can target a several machines with the script and create the event consumer on the remote machines. The second cool thing is the fact that permanent event consumers are cool. They monitor for and respond to events without the need for a script to be running. Talk about something cool! I run one script one time, and then my computer will always look for an event and respond to it. Dude (or Dudette) that rocks! This means that almost every one of the event and monitoring scripts that are discussed in the Hey, Scripting Guy! Blog can be converted to a permanent event monitor.

Portions of today’s post are adapted from my WMI book, Microsoft Windows Scripting with WMI: Self-Paced Learning Guide, that was published by Microsoft Press in 2006.

In yesterday’s Hey, Scripting Guy! Blog post, I talked about the concepts involved in creating a permanent event consumer.

$query = “Select * from __InstanceModificationEvent within 10 where

The CreatePermenantEventConsumer.ps1 must be run with administrator rights, and before running the script, I right-click the Windows PowerShell ISE icon and select Run as administrator. When the CreatePermenantEventConsumer.ps1 script runs no output is generated. This output of the script and the use of the Get-Service cmdlet to check the status of the bits and the browser service is seen in the following figure. 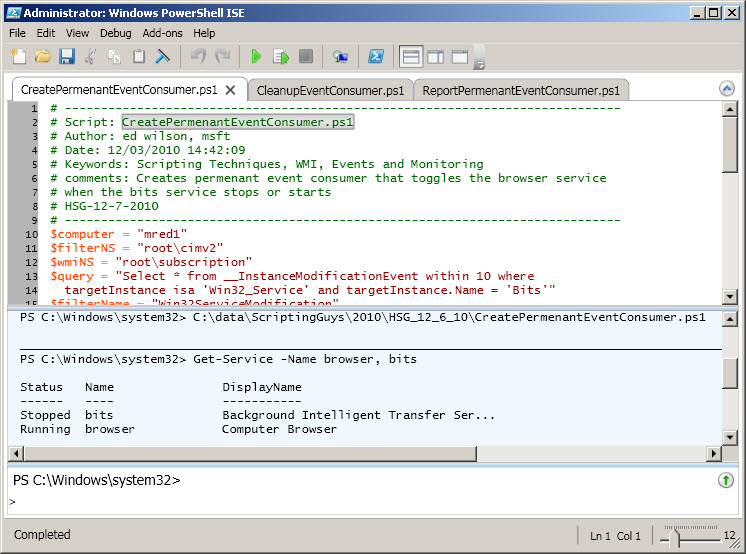 The command I used to check the status of both services is seen here.

When checking the status of the services, as well as toggling the bits service, I use the bottom execution pane. This is seen in following figure.

To create an instance of the __EventFilter, I use the Set-WmiInstance. The VBScript code that was discussed yesterday is seen here.

objFilter.EventNamespace=”\root\cimv2″ ‘NOTE:IS NOT IN THE BOOK! Write at BTM pg.110

The next step is to create the consumer. The VBScript code from yesterday is seen here.

Again, the Set-WmiInstance Windows PowerShell cmdlet is used to create a new instance of the ActiveScriptEventConsumer WMI class. As before each property receives its value via the hash table. The Windows PowerShell command is seen here. (As before, this is one logical line of Windows PowerShell code. I had to break it down into four lines to display it correctly on the blog platform. If you want to convert it to a single line, copy the following code and back each line back up to the previous line while taking care to remove the backtick, grave, reverse quote, backward apostrophe, or whatever you want to call the ` symbol).

Finally, I have to bind the consumer to the event. To do this, I have to create an instance of the __FilterToConsumerBinding WMI class. The VBScript code to do this (seen yesterday) is seen here.

In Windows PowerShell, I use the Set-WmiInstance cmdlet to create and to configure a new instance of the class. In this script, I do not have to save the object that is returned (like I did in each of the two previous commands) and therefore I pipeline the results to the Out-Null Windows PowerShell cmdlet. One thing that I did not mention yesterday is that if a suitable event filter (__EventFilter) already exists, or if a suitable event consumer class already exists, you do not have to create a new instance. All that must occur is for the event and the consumer to be bound together via the __FilterToConsumerBinding class. Although it is unlikely that both a suitable consumer and a suitable filter would already exist, it is definitely possible that one or the other might exist. Here is the Windows PowerShell code to do the binding.

One thing I like to do when I am finished creating everything for the new permanent event consumer is to check whether everything looks like it is created correctly. To do this, I use Windows PowerShell’s Get-WmiObject cmdlet. With the gwmi alias, this is short work, although I have to create a simple script to do this. As this is a quick script, I incorporated the gwmi alias instead of typing Get-WmiObject.

The report from these three commands is seen here.

Cleanup involves deleting each of the three new instances. In Windows PowerShell it is easy to delete these instances. I use the Remove-WMIObject cmdlet. I have to be very careful doing this to make sure that I delete only the instances I previously created. It turns out that my machine already has an instance of one of the classes installed. I use the Where-Object to filter the one I created. Proper WMI methodology would be to connect to the specific instance of the __FilterToConsumer binding class. But because this is an association class, it has two keys in its path to the instance. The Path to this class is seen here.

Using Windows PowerShell and the where-object I filter the name of the __EventFilter, and pipeline the object to the Remove-WmiObject cmdlet and I am done; no fussing with embedded quotation marks, no worrying about line wrapping or any of the typical problems confronting composite keys in WMI. Here is my cleanup code.

I invite you to follow me on Twitter or Facebook. If you have any questions, send email to me at scripter@microsoft.com or post them on the Official Scripting Guys Forum.. See you tomorrow. Until then, peace.