Use PowerShell to Find and Uninstall Software

Summary: Learn how to use Windows PowerShell to get software installation locations, and to uninstall software from remote computers.

Hey, Scripting Guy! We have a dumb application that we have to use at work. The company has released a new version of this application, and I am trying to write a Windows PowerShell script to uninstall the old application—the problem is that I need to find the application first. I tried looking in the registry, but the install key is empty…figures. Like I said, this is a really dumb application. I read the guest blog written by Marc Carter about problems using the Win32_Product WMI class, but it looks like I am going to be stuck using this anyway. The problem is that it is really slow. Is there any way to speed this thing up? I have to query over a thousand computers, and in our testing, this query takes nearly five minutes to complete—that would be three and a half days for only one query.

Microsoft Scripting Guy, Ed Wilson, is here. The Scripting Wife and I were in Texas for the Corpus Christi Windows PowerShell User Group meeting when Marc Carter told me about the problem with the MSI installer reconfiguring applications when the Win32_Product WMI class is queried. I immediately encouraged him to write a guest blog about this issue.

In the image that follows, I import the HSGWMIModuleV6 module, use the Get-WMIKey function to retrieve the Key property of the Win32_Product WMI class. I then use the Get-WmiObject cmdlet (gwmi is an alias) to query the Win32_Product WMI class, and I output the management objects to a table via the Format-Table (ft is alias) cmdlet. The following image displays the commands and the output from the commands.

BT, you may ask, “What about Marc Carter’s warning about using the Win32_Product WMI class? “ Well as seen in the results from querying the event log, it is a concern. Shortly after querying the Win32_Product WMI class, I used the Get-EventLog cmdlet to query the application log for MSIInstaller events. The following image shows massive product reconfiguring going on.

The query to return the three parts of the composite key only needs to run once; the values do not change. It is also possible to use the Get-WmiObject cmdlet and a filter to improve the performance of the command a little bit. The nice thing about this command is that it returns the information that is required by the [WMI] type accelerator. The command and associated output are shown here.

Here is the key I derived for Microsoft Silverlight on my computer. (This is a single line command. A space between Microsoft and Silverlight exists, but other than that, there are no spaces).

The reason for all the escaping in the ClassKey, is that WMI expects the quotation marks and the curly brackets in the key itself. To see what WMI expects to receive via the command, I use the Windows Management Instrumentation Tester (WbemTest) command, and I view the instances of the class. The following image illustrates the instances of Win32_Product on my computer. 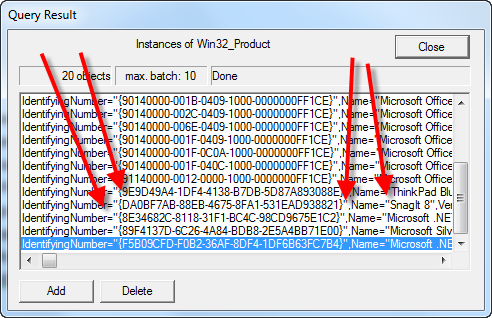 I can also include the WMI namespace (really important if the class resides in a namespace other than the default root\cimv2). In the command that follows, notice that there is a backslash that precedes the word root. One other thing to notice is that a colon separates the WMI namespace and the WMI class name.

If I need to connect to a WMI class on a remote computer, I use a double backslash and the name of the computer, then the WMI namespace, the WMI class, and the WMI ClassKey. The command that follows illustrates this.

In the image that follows, I illustrate the different ways of querying WMI for Microsoft Silverlight software. I then compare the speed of using the Get-WmiObject cmdlet against the speed of using the [WMI] type accelerator. As shown in the following image, the Get-WmiObject cmdlet, using the filter to find Microsoft Silverlight, takes over five seconds on my laptop. Using the [WMI] type accelerator takes less than one-half of a second. This is more than 10 times faster. 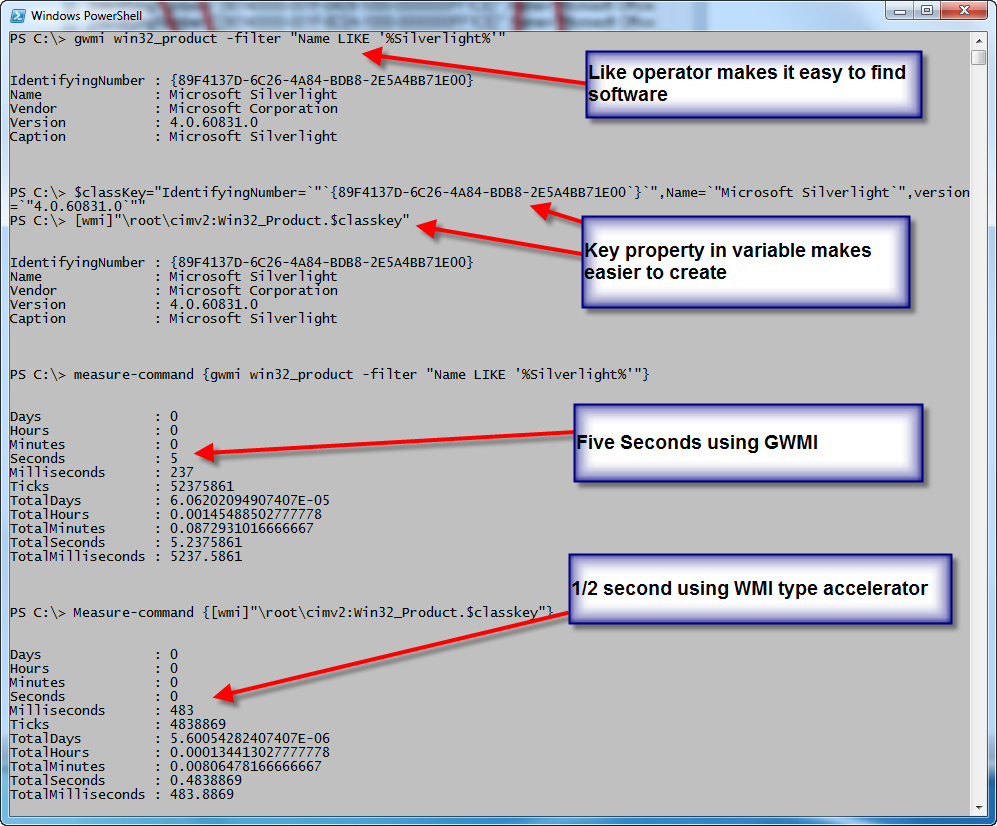 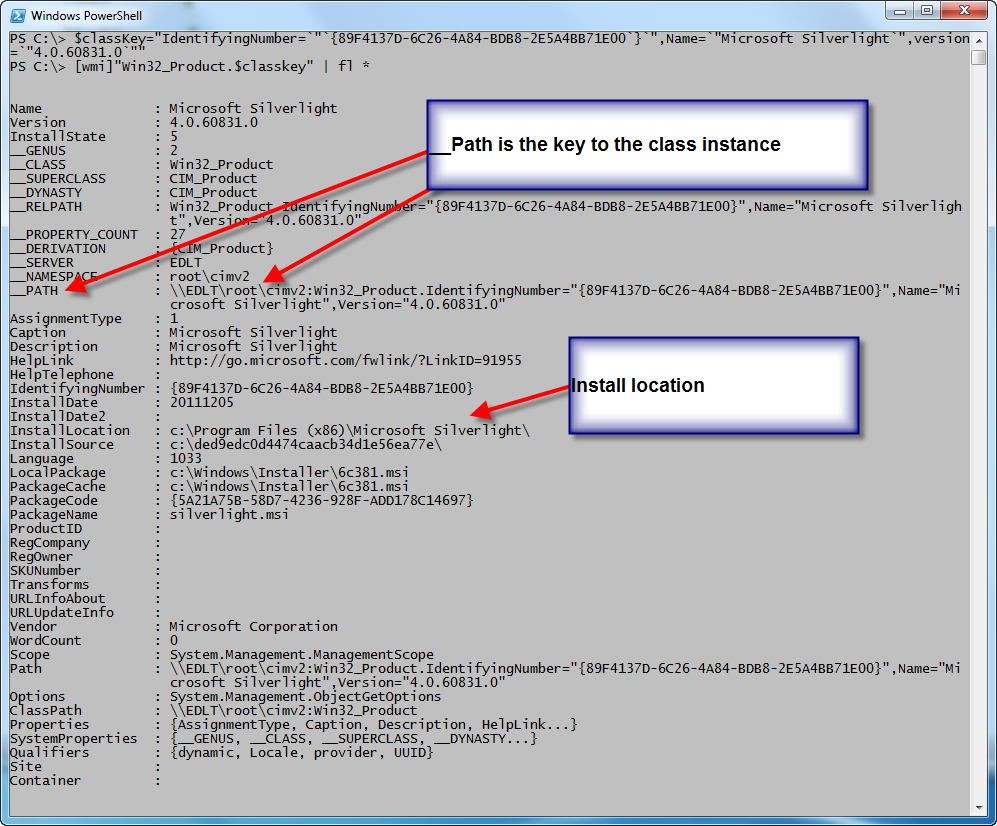 BT, you did not ask, but there is an Uninstall method available from the Win32_Product WMI class. It appears only on instances of the class. Therefore, it is possible to uninstall software by using the command that is shown here. (If I want to uninstall from a large collection of servers, I use the foreach statement ($servers is an array of server names).

BT, that is all there is to using the Win32_Product WMI class to detect or to uninstall software. Join me tomorrow when I will have a guest blog written by Raymond Mitchel as he talks about Windows PowerShell and SharePoint.

Use PowerShell to Inventory and Update SharePoint Environments
Summary: Learn how to use Windows PowerShell to inventory objects in your SharePoint environment and to script updates. Microsoft Scripting Guy, Ed Wilson, is here. ...