Use PowerShell to Create Ordered Dictionary

Note  For a good overview of the ordered dictionary in Windows PowerShell, refer to this Hey, Scripting Guy! Blog post by June Blender: ConvertTo-OrderedDictionary.

Dude, it is frustrating…

You don’t get it? Here is an example (a non-sorted hash table, not a soggy sandwich)…

I create a nice hash table, specify the letters in order, and boom! They become jumbled.

Ordered dictionary objects to the rescue

Note  For some of the issues surrounding attempts to sort this type of hash table, see Weekend Scripter: Sorting PowerShell Hash Tables.

If you read this post, you know that it is possible to sort a hash table—it is, well, a bit of extra work. And the whole point of Windows PowerShell is to reduce work, not to make more work.

Inside scoop!  I will admit that the first time I tried to do this, it did not work. Even the second and third times, it did not work. But then I emailed some people on the Windows PowerShell team, and I was able to figure out what I was doing wrong.

This is how I tried to do it the first time…

I put the [ordered] type accelerator next to the variable I wanted to hold the ordered dictionary. It seemed to make sense.

Here is the output from the command. Notice that it failed, and the error says the ordered attribute can only be specified on a hash literal node. Hmmm, that is about as clear as mud. 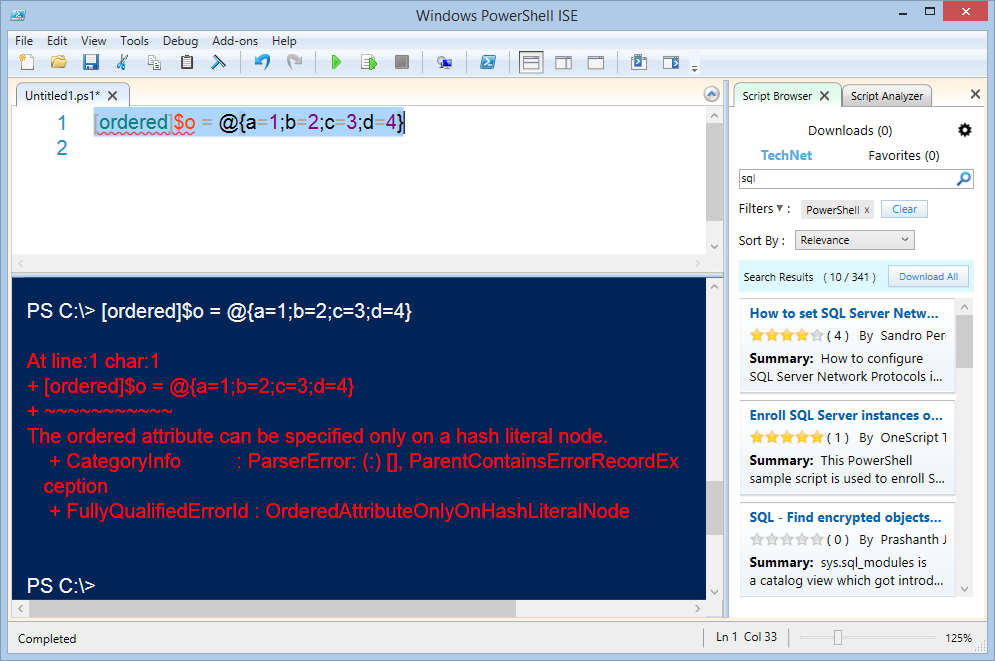 The fix is easy

When I was told I had the ordered attribute tag (type accelerator) in the wrong place, I moved it to the right place (both figuratively and literally). Voila! Now it works. Here is the corrected command:

And as appears in the following image, the output is also in the correct order: I pipe the output to the Get-Member cmdlet, and I can see that it is, in fact, an OrderedDictionary object: As shown here, I can also retrieve associated key values in the same way that I can with a hash table: But because it is an OrderedDictionary, I can also directly index into the object (like I can with an array). This is shown here:

That is all there is to using an ordered dictionary. Join me tomorrow when I will talk about working with local user accounts.