Summary: Use Windows PowerShell parameter attributes to avoid input errors in a function.

Microsoft Scripting Guy Ed Wilson here. This week is great. The Scripting Wife and I are enjoying meeting Windows PowerShell luminaries. I am working with a group of IT pros to help them to learn Windows PowerShell, and the weather has been wonderful. I hope to get some  ime to head out to a really neat hardware store and gaze longingly at the hand planes.

Anyway, one of the students, who reads the Hey, Scripting Guy! Blog on a daily basis, commented that he thought that the script in yesterday’s Cool PowerShell Game Teaches Cmdlet Names post could stand a bit of improvement. I definitely agree.

In today’s article, I am going to modify the script from yesterday and turn it into a function. In addition, I am going to add parameter validation. For example, in yesterday’s script it would be possible to get a divide-by-zero error if you ran the script with the wrong number for the  ount. In addition, it is possible to receive an output of a continuous solid line if you were to change the input value to a one. To make it easy to use the code and to modify the difficulty of the puzzle, I will include a command-line parameter to allow for quickly changing the difficulty. The complete New-CmdletPuzzle function is shown here.

The param keyword tells the function to expect a value from the command line. I use the parameter attribute to create a parameter in position 0 and assign a helpmessage value as well. Here is the first part of the param statement:

In addition, I decided to create an alias for the input parameter. To do this I use the alias attribute:

If I supply a value to the function that is outside the allowed range specified by the validaterange attribute, a nonterminating error occurs. A sample error is shown here: 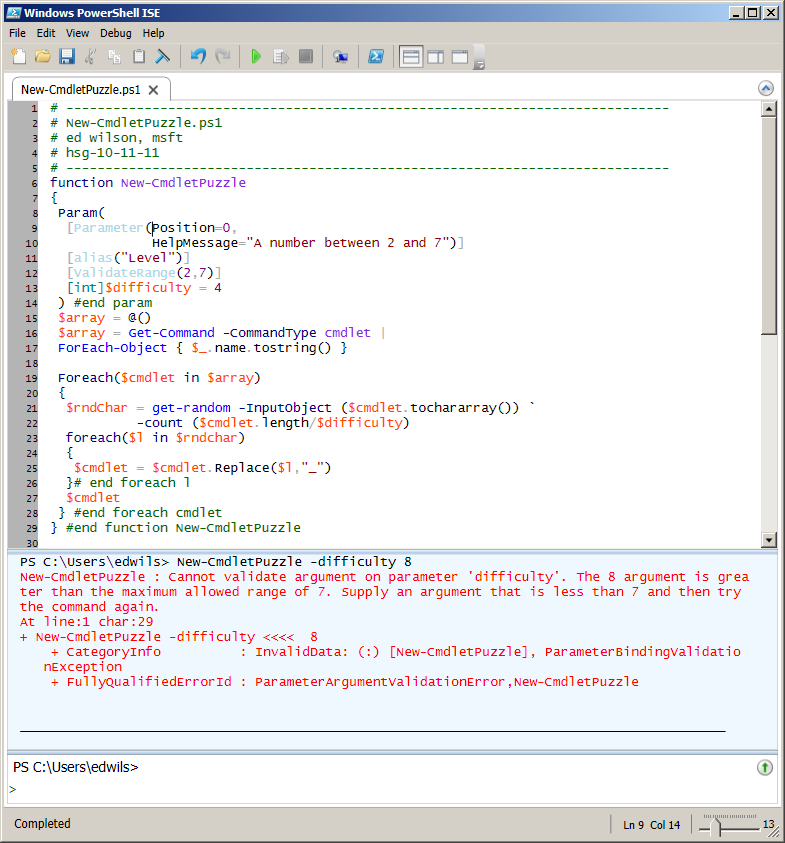 The last thing I do is specify a default value for the difficulty parameter. In addition, I use a type constraint to ensure the value is an integer. This line of code is shown here:

That is it. When I run the function with no input parameters, it runs with a default value of 4. If I made the parameter mandatory, the function would ignore the default value and prompt. But when I have a default value assigned, it is always used unless it is overridden, so the  arameter is essentially mandatory because a value is always used for the parameter. I can use the level alias, and pipe the output as I would a regular Windows PowerShell cmdlet. The command and associated output for this are shown in the following image. The file created by the previous command is shown in the following image. 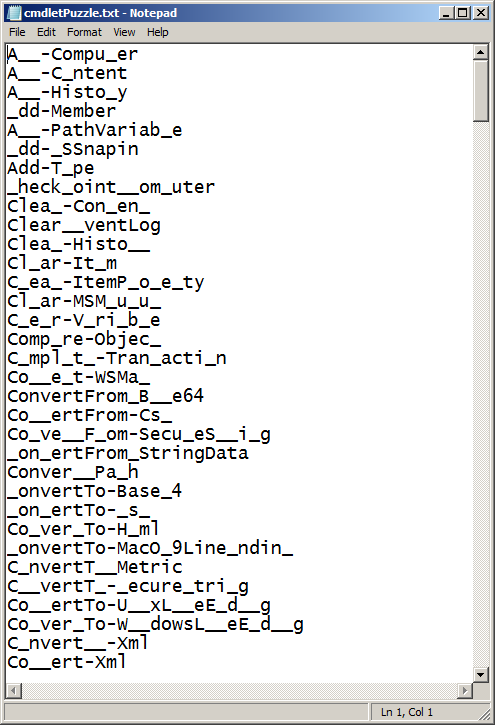 Well, that is enough playing around for one day. Join me tomorrow as I continue to explore string manipulation, and as I continue, my progression from script to function to…see you tomorrow. Until then, have a great day.

Create a PowerShell Quiz Script
Summary: Learn how to use hash tables and create a Windows PowerShell quiz script.   Microsoft Scripting Guy Ed Wilson here. For the past several days, I have been ...