Use PowerShell Commands from One Session in Another Session

Summary: Learn how to automatically save commands from one session, and then use them in a new Windows PowerShell session.

Microsoft Scripting Guy, Ed Wilson, is here. One of the fun things about getting to travel around and talk to people who are using Windows PowerShell on a daily basis to automate their systems is the quality of the questions I receive. One question that has come up several times in the last month that the Scripting Wife and I have been traveling is, “How can I save my history when I exit Windows PowerShell, and then have that history available to me when I open up Windows PowerShell again?”

I gave this some thought…

The trick is to call the function that exports the history.xml file prior to exiting Windows PowerShell instead of clicking the “X” on the Windows PowerShell console, or typing exit to exit Windows PowerShell. As always, when I create a function, I also like to create an alias for that function. The two commands from my profile that create the aliases are shown here.

Instead of automatically importing the saved history, I manually type the alias for my import saved history function. The reason for this is that I do not always want to import my saved history; but, this is simply the way I work. I could easily modify my profile so that I do import my history automatically, and then I could simply clear the history if I did not want to use it. It will require a bit of testing before I make up my mind as to which action is most efficient.

Here is my function to export command history to a history.xml file and exit Windows PowerShell.

So, I use the Test-Path cmdlet to see if there is a folder named History in my Windows PowerShell profile folder. If it does not exist, I create it by using the New-Item cmdlet.

I then use the Get-History cmdlet to get all of the items in my command history. By default, the Get-History cmdlet returns only 32 items from the history. If I want to get all of the commands in my command history, I have to specify a value for the Count parameter. The most logical thing to do is to use the $MaximumHistoryCount variable to specify this number. In this way, if I increase the maximum history count from the default value of 64 to another number, my function will always export all of the commands. I use the Export-CliXML cmdlet to export my command history into an .xml file, and I use Join-Path to create the path to my file. This command is shown here.

The last thing I do is call the exit command to exit Windows PowerShell.

The function to import my saved history.xml file appears here.

Once again, I use the Test-Path cmdlet to ensure that the history folder exists. If it does, I assume that a history.xml file exists. This is not a major problem, because the only reason the History folder would exist, would be if I had created it. If I did create it, it should have been when I was exporting a history.xml file.

The next thing I do is import the xml file, and pipeline it to the Add-History cmdlet. Here is that portion of the function.

I bump up my maximum history by assigning a new value to the variable. Rather than typing a big, long, complicated number, I simply use the kb administrative constant to allow me to create 2048 history entries. This command is shown here.

You might wonder, "How large can I create the $maximumHistoryCount variable?" To determine the maximum allowed value, I use the Get-Variable cmdlet. This command is shown here.

One thing to keep in mind, is when you use the Get-Variable cmdlet, do not include the dollar sign prefix. If I do include the dollar sign prefix of the variable, I obtain a rather cryptic error that states Windows PowerShell cannot find a variable with the name of 2048. Because I recognize that number as the value I had increased the $maximumhistorycount variable to, it makes sense. I then drop the dollar sign, and return the psvariable object. I then send the variable to the Format-List cmdlet, and I choose all of the properties. The result reveals that there is an object hiding in the attributes variable. I then pipe the psvariable object to the Select-Object cmdlet, and I use the ExpandProperty parameter to expand the object that is stored in the attributes property. These commands are shown here.

The commands and their associated output are shown here. 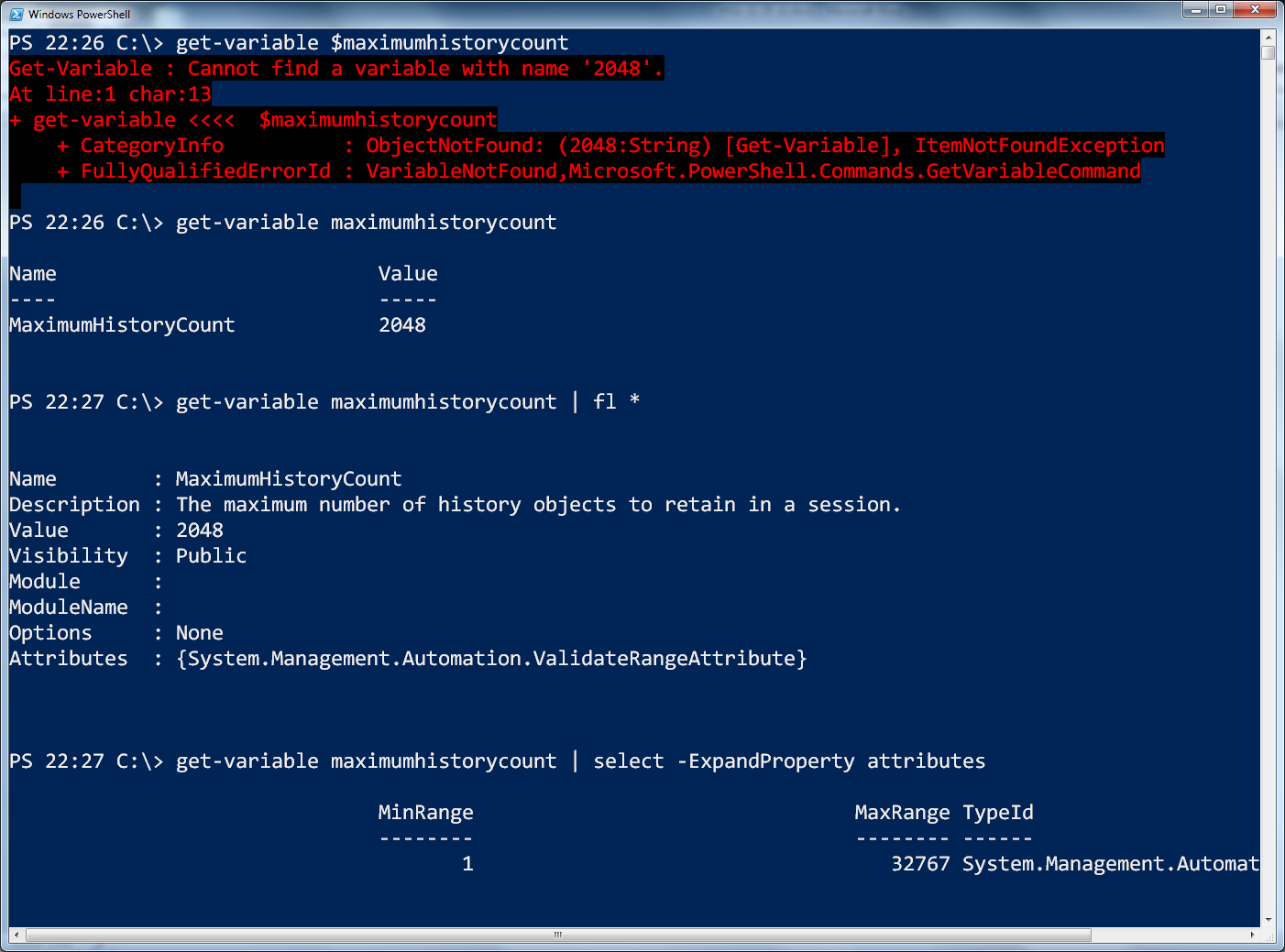 In the following image, I show my profile with the two new functions, the two aliases, and the two variable assignments. 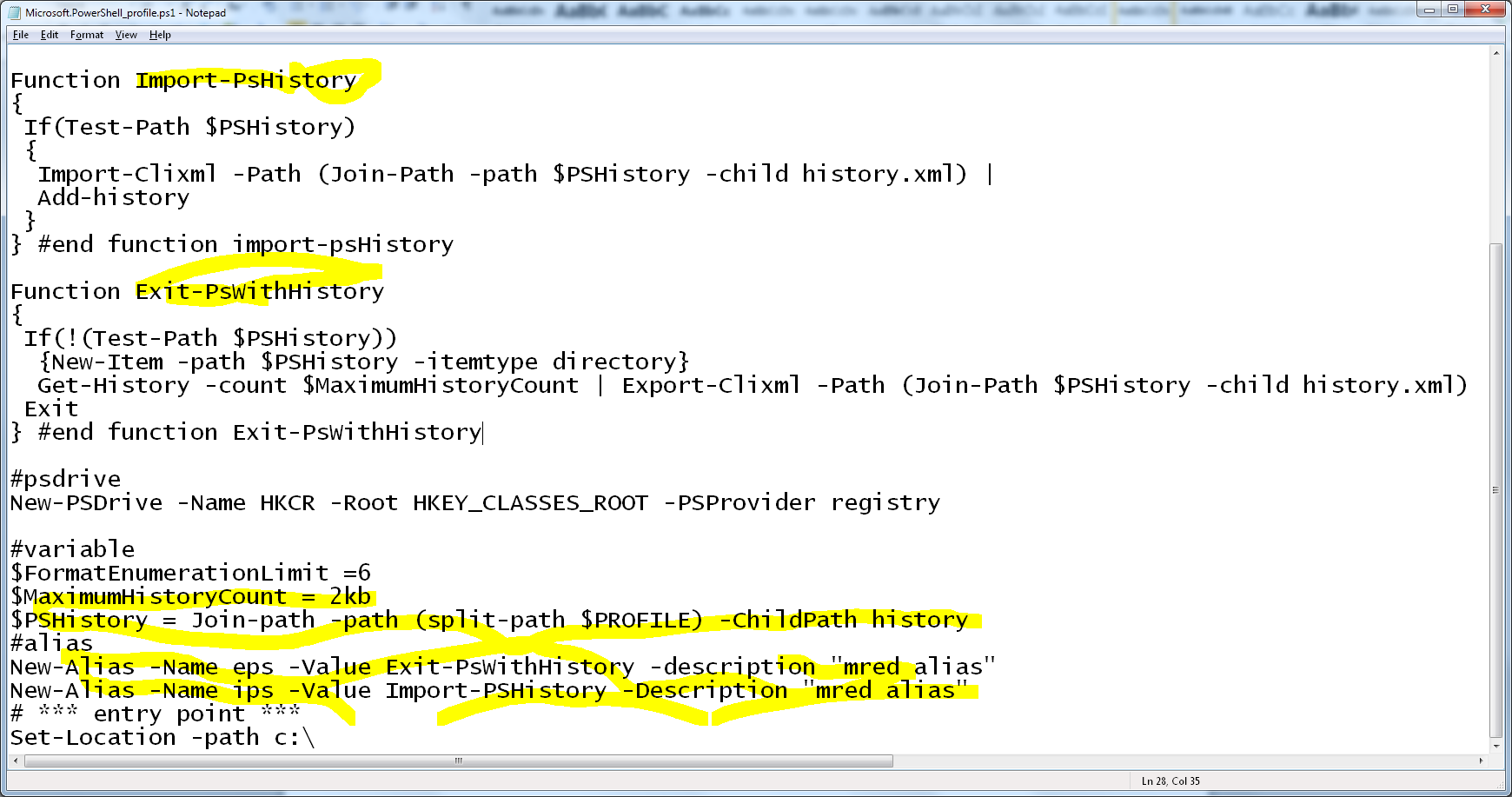 To exit Windows PowerShell, I use the eps alias (my alias for the Export-PsWithHistory function. When I start Windows PowerShell, my profile runs, and it loads the functions, aliases, and variables into memory. I then type the Import-PsHistory command (I can also use the ips alias). After I do that, I populate my history with all of my previous commands. I use the h (alias for Get-History) command to see what commands I now have available to me in my command history. This sequence of commands is shown in the image that follows. 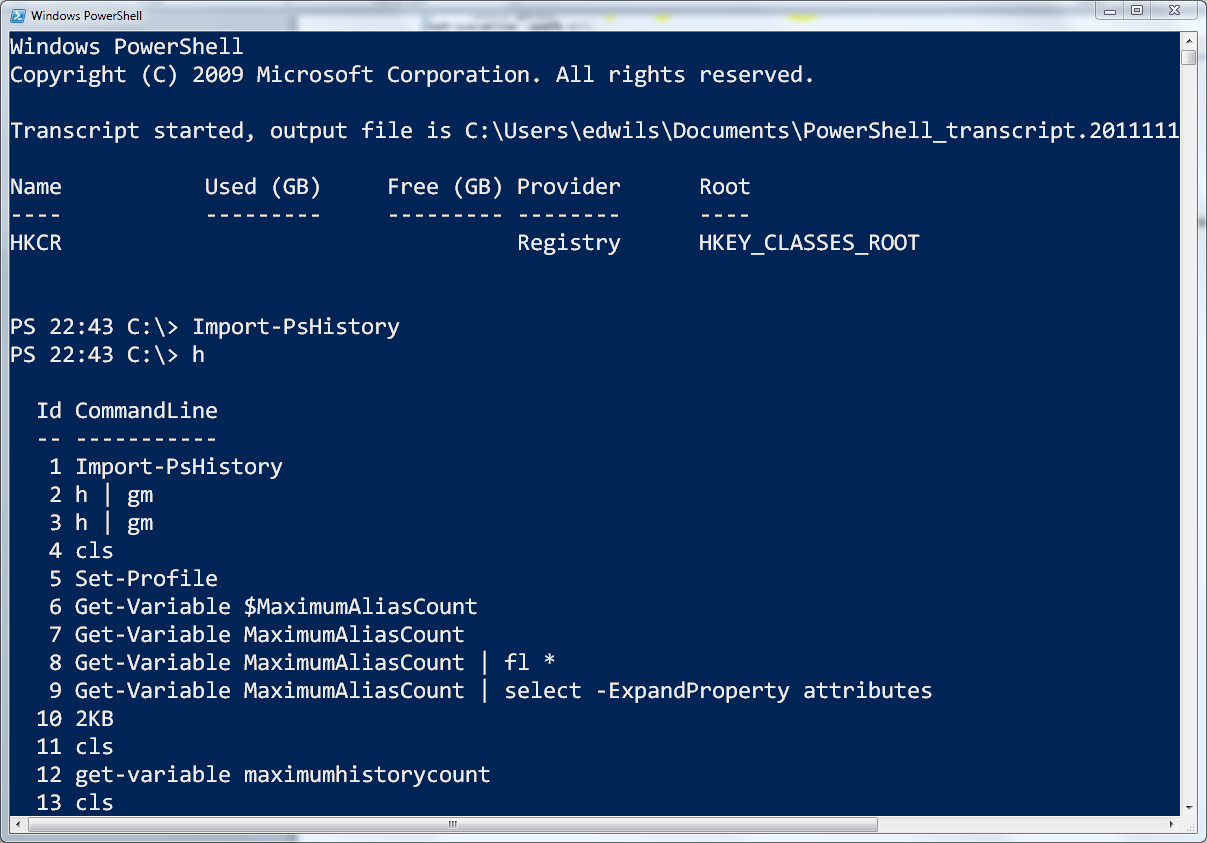 There is one downside to this technique: Imported commands (via Add-History) do not populate the up and down arrows. But, dude (or dudette), with 2048 potential commands in the command history, that would be a ridiculous amount of Up and Down arrowing; that is why there are single letter aliases for Get-History and for Invoke-History.

Join me tomorrow for the Weekend Scripter when I will explore more coolness related to Windows PowerShell.

Doctor Scripto
November 26, 2011
0 comment
Modify a PowerShell Script to Accept Piped Input
Summary: Learn how to modify a Windows PowerShell script and turn it into an advanced function that accepts piped input and has complete Help. Microsoft Scripting Guy, Ed...