Learn How to Use PowerShell to Run Exchange Commands Remotely

Microsoft Scripting Guy, Ed Wilson, is here. Please do not FDISK your server! I say again, please do not FDISK your server. It will really be a waste of time. What you are no doubt experiencing is, in fact, the intended experience. You have no doubt discovered that the Exchange Server 2010 cmdlets are a little different—in fact, they are all functions. The great thing about this is that you can look at the content of every one of the functions to discover how they work.

If I make a remote connection to a server running Exchange Server 2010, and I add the three management snap-ins for Exchange Server, Windows PowerShell displays no errors. However, when I attempt to run a common Exchange Server command, such as Get-ExchangeServer, an error appears. The commands, and associated errors are shown in the image that follows. The code that follows illustrates connection to a remote server running Exchange Server 2010 (named EX1) as the administrator from the iammred domain.

When the Import-PSSession command runs, a warning appears that states some of the imported commands use unapproved verbs. This is a normal warning for the Exchange Server commands, and can be safely ignored.

When connected, the Exchange Server cmdlets appear in the local Windows PowerShell console and they work as if they locally installed. To obtain information about servers running Exchange Server, use the Get-ExchangeServer cmdlet. This command appears here.

Because there are several steps involved in making an implicit remoting session to a remote server running Exchange Server 2010, it becomes a good candidate for a function. Because the function is a bit long (with the comment-based Help), I also uploaded it to the Scripting Guys Script Repository. Here is the complete New-ExchangeSession function.

This function creates an implicit remoting connection to an Exchange Server

This function creates an implicit remoting session to a remote Exchange

Server. It has been tested on Exchange 2010. The Exchange commands are

brought into the local PowerShell environment. This works in both the

two parameters: the computername and the user name with rights on the remote

Makes an implicit remoting connection to a remote Exchange 2010 server

named ex1 using the administrator account from the iammred domain. The user

The name of the remote Exchange server

The user account with rights on the remote Exchange server. The user 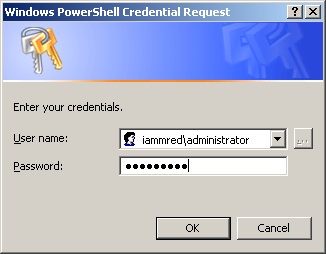 When I enter the credentials, the implicit remoting session starts, and I can use cmdlets for Exchange Server as if they were installed on the local computer. In the following command, I retrieve information about Microsoft Exchange Server mailbox databases.

One command that is not available is the Get-ExCommand. I will talk about that tomorrow.