Summary: In Windows PowerShell command history, you may run into the console history limit.

In Windows PowerShell 3.0 the MaximumHistoryCount is set to 4096. I find this value by using the Get-Variable cmdlet. This command is shown here.

At 4096, it is unlikely that I will ever need to increase the storage space. In Windows PowerShell 1.0, it was set to 64, and I frequently was overwriting my command history. I generally do not keep the same Windows PowerShell console session open long enough to type 4096 commands—so I have never overwritten that history buffer. But what if I feel the need to increase my command history? What is the biggest value I can assign? One way to find out is to simply run a command and see what happens. Using one of my top ten favorite Windows PowerShell tricks, I use the range operator and begin assigning new values. Here is the command I use.

What I am looking for is an error to raise that states I have exceeded the allowed value for the variable. This is exactly what happens, and I press CTRL-C to break the command and prevent further errors from appearing in the Windows PowerShell console. The command and the error that appears when the command runs are shown here. 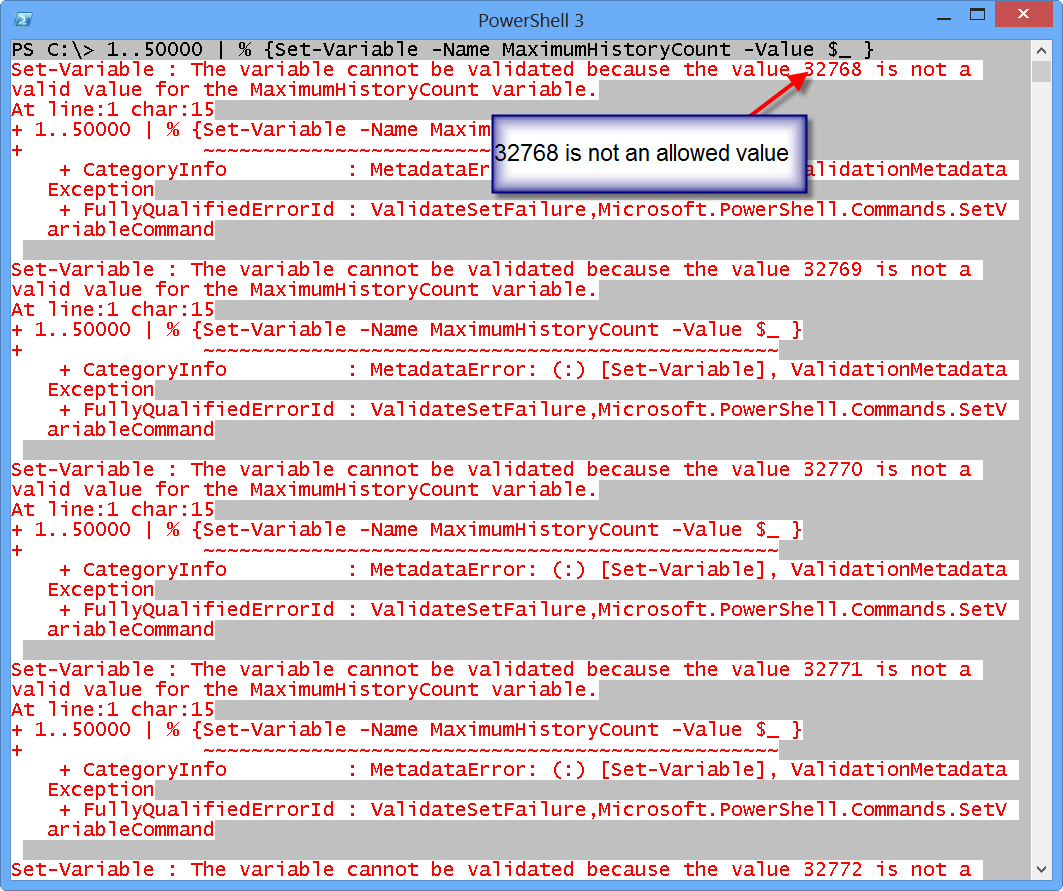 A better approach to finding maximum values that are permitted for a variable involves using the Get-Variable cmdlet. In the following command, I return information about the MaximumHistoryCount variable by piping the output to the Format-List cmdlet.

Description : The maximum number of history objects to retain in a session.

The MaxRange property tells me that the maximum allowed value for MaximumHistoryCount automatic variable is 32767. Interestingly enough, the error shown in the previous image occurs when I attempt to set the value to 32768, and I could assume that 32767 was the most that I could store. Now I know for certain.

PowerTip: Working with the Maximum History Setting
Summary: Learn how to increase the maximum history value.    How can I increase the number of commands that are stored in the Windows PowerShell command history...

Doctor Scripto September 10, 2012
0 comment
Bespoke Scripting? What Do You Want in PowerShell?
Summary: Let the Windows PowerShell team know what you would like to see in the next version. Microsoft Scripting Guy, Ed Wilson, is here. This week is a complete geek ...