I Found this PowerShell Function—Now What Do I Do? Part 3

Summary: Microsoft Scripting Guy, Ed Wilson, talks about combining functions into a single function file, and using them in scripts.

Microsoft Scripting Guy, Ed Wilson, is here. This morning is sort of mellow. It seems as if the clouds are touching the ground, and all sound is suppressed by a thick cloth batten. After seemingly weeks of rain, it is nice to have a not so wet day. I am on the lanai sitting in our porch swing reading my email via Outlook Web Access on my Surface RT. I love the long battery life and the portability of this device, and the fact that it has Windows PowerShell makes it even better.

Note  This is the third part of a multipart series about using Windows PowerShell functions and modules. Prior to reading this blog, you should read the previous posts:

If one function is cool, then two are even better

For ease of use, I have uploaded these functions to the Scripting Guys Script Repository: Two WMI Functions.

Using the function script by dot sourcing it 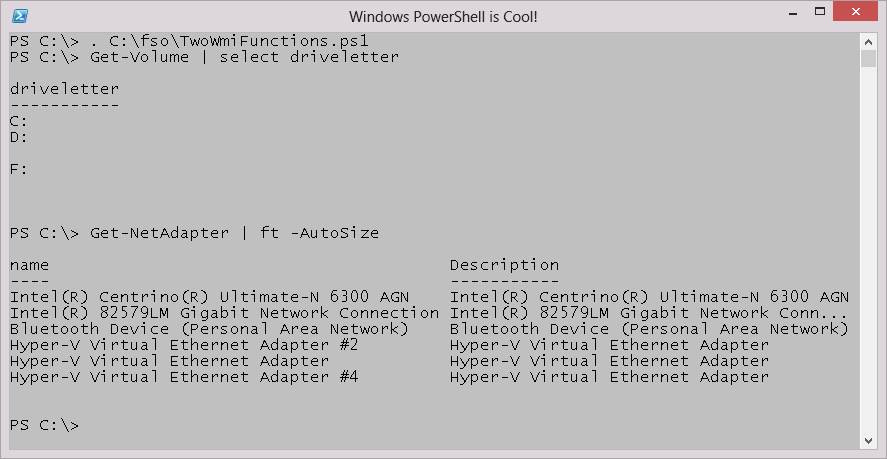 Lots of people are migrating to Windows 8 on their desktops; but unfortunately for many network administrators, they are forced to interop between Windows 8 and other versions of Windows. One of the things that is great about Windows 8 (and Windows Server 2012 for that matter) are the many CIM functions that wrap WMI classes. These are convenient and easy to use. However, for down-level systems, I still need to use the WMI classes. To avoid really cluttering up a script with a bunch of WMI code, I can use dot sourcing to handle the transition period. Here is an example of how that might work:

Note  When you create this sort of transitional function, ensure that the property names are the same. In this way, using one function or the other will also be the same. In my example TwoWmiFunctions.ps1 script, I had to rename several WMI class property names for compatibility.

In the following image, I use the dot-source technique to bring in the script that contains the compatibility functions. Now What Do I Do? Week will continue tomorrow when I will talk about using a Windows PowerShell module. It is really cool, and you do not want to miss it.

Doctor Scripto
May 14, 2013
0 comment
I Found This Module—What Do I Do?
Summary: Microsoft Scripting Guy, Ed Wilson, talks about how to use a Windows PowerShell module.   Hey, Scripting Guy!  I found this module in the ...