Microsoft Scripting Guy Ed Wilson here. Summer has finally hit Charlotte, North Carolina, in full force. It is 87 degrees outside, and the humidity is 78 percent. This makes for a very hot and sticky day. I do not enjoy being hot and sticky, and therefore decided it was the perfect time to spend some time inside writing scripts. My list of scripts to write that I keep on the white board in my office is growing rather long, and with the added incentive of the heat and the humidity outside, I could hear Windows PowerShell calling my name.

Recently, someone on Twitter asked how to display color-coded output inside a table using Windows PowerShell 2.0. In the past, I have seen this question come up from time to time, and I have even heard people state that it cannot be done. However, because you can use a script block to create custom column headings for tables in Windows PowerShell, I figured I could also generate custom colors.

Next, the original color of the ForegroundColor property is stored in the $originalColor variable. This is shown here:

After the preliminaries are out of the way, the results of the Get-Process cmdlet are piped to the Format-Table cmdlet. The name property is displayed without modification, but a hash table is used to display a column named “alert”. The expression that is assigned to the alert column uses an if statement to see if the CPU time is greater than 1. If it is, the ForegroundColor is changed to cyan, and the CPU value is displayed. If the value is not greater than 1, the color is changed to yellow and the CPU value is displayed. This section of the code is shown here:

The last thing to do is to change the display property back to the original color. This is seen here.

When the script runs, the output is displayed that is shown in the following image. 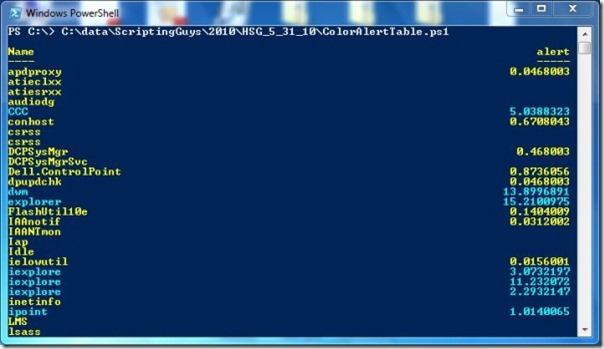 If you want to know exactly what we will be looking at tomorrow, follow us on Twitter or Facebook. If you have any questions, send e-mail to us at scripter@microsoft.com or post them on the Official Scripting Guys Forum. See you tomorrow. Until then, peace.

Hey, Scripting Guy! Weekend Scripter: The Fruity Bouquet of Windows PowerShell Enumerations
Microsoft Scripting Guy Ed Wilson here. Our alarm clock died a slow, but rather painless death. All of a sudden, it began to lose track of time. It would forget to wak

ScriptingGuy1 June 6, 2010
0 comment
Hey, Scripting Guy! How Can I Have Files Copied to a USB Drive When the Drive Is Inserted into a Computer?
Hey, Scripting Guy! I would like to be able to use Windows PowerShell 2.0 to monitor for the insertion of a portable USB drive into a computer. When the drive is det