Find All Word Documents that Contain a Specific Phrase

Microsoft Scripting Guy, Ed Wilson, is here. Exciting news—actually two pieces of exciting news. This month, I am starting a new series. I call it PowerTips, and each day, I will have an additional posting of a short Windows PowerShell tip, trick, or question and answer. The postings will appear midday Pacific Standard Time. I think you will enjoy them—I know I am having fun writing them.

Now for the second piece of exciting news. The registration site for Charlotte, North Carolina PowerShell Saturday is open. At this point, there are still plenty of tickets available, but the last PowerShell Saturday sold out in 13 days, so you will want to register quickly for this event to ensure you have a place. We are running three tracks (Beginner, Applied, and Advanced), so there is sure to be something there for everyone. I am making a couple of presentations, as are a couple of Microsoft premier field engineers, and even a Microsoft Windows PowerShell MVP. The lineup of speakers is stellar.

It seems like I am not very good at anticipating future needs—at least exact needs. But because I use Windows PowerShell so much to do so many things, I am at least consistent. When your data is consistent, you have a fighting chance of solving a particular issue. I use Windows PowerShell to create all of my individual Microsoft Word documents, based on a template that my editor, Dia Reeves, created for me. Because of this, the structure of all my blog posts is relatively consistent.

When I first started the Hey, Scripting Guy! Blog, one of the first projects I spent a lot of time working on to describe the blog posts was Developing a Script Taxonomy. I carried over this taxonomy to the TechNet Script Center Script Repository. Therefore, I am pretty much assured that blog posts related to a specific topic will contain a specific set of words.

The Scripting Wife recommended that I create a blog tag called “guest blogger” for each of the guest blogs. The only thing we (meaning me) messed up was that the line in the template for the tags is Normal style. Microsoft Word uses the Normal style in a document for the bulk of the text. If I had of used a specific style (such as Heading 9), it would be easier to find a specific text string that uses a specific word style. The following image illustrates what my Microsoft Word document looks like after I have edited a guest blog. I am running the beta version of Office 2013, and it works really well. The thing that is interesting is that, as far as I can tell (at least so far), the Microsoft Word automation model has not changed. Therefore, I do not need to reinvent the entire script. I based my script on a script I wrote in December 2009 for the Hey, Scripting Guy! Blog, How Can I Italicize Specific Words in a Microsoft Word Document.

Note   Because much of today’s script came from the previous script, you should refer to that blog post for additional details about the script construction.

The script I use today does the following:

Items I would like my script to do, but I do not have time for right now:

There is only one parameter: the Path to the parent directory from where the search begins. I could have added at least three other parameters: BeginDate, EndDate, and SearchTerm but I did not. Those values are hardcoded in the script itself. But exposing these values as variables would be a GREAT first step towards writing a better script. After creating the initial parameter, I initialize the variables used for the Find.Execute method. By creating and initializing the variables with their values, the method signature is much more readable than if everything was hard-coded in. Here is the initial section of the script.

I use the Get-ChildItem cmdlets to find all the Word documents that begin with HSG or WES and that were last written to between July 1, 2011 and June 30, 2012. I store the matching FileInfo objects in the $docs variable. The command to do this is shown here.

I now initialize and create a few more variables. The first variable is used to store the text for which to search. Next the $i variable is a counter that is used by the Write-Progress cmdlet to display the progress of the search operation. This takes a while, so using the Write-Progress cmdlet to display up-to-date progress and status information is a good idea. The $totalwords variable keeps track of how many guest blogger words are written, and the $totaldocs variable keeps track of the number of guest blogs. This portion of the script is shown here.

Now I begin to loop through the collection of documents by using the foreach statement. The Write-Progress cmdlet displays a progress bar to inform me about the percentage of completion. I use the FullName property from the FileInfo object (it contains the complete path to the Microsoft Word document) to open the document and store the returned Document object in the $document variable. This portion of the code is shown here. The following code creates a Range object from the Content property from the Document object. Then the Find.Execute method searches for the string “guest blogger.” The variable $wordfound contains a Boolean value that is used to detect if a match occurs.

If a match occurs, the full name of the file and the word count display to the output window. I then gather the total words and the total number of documents to display later. The output from the script is shown here. 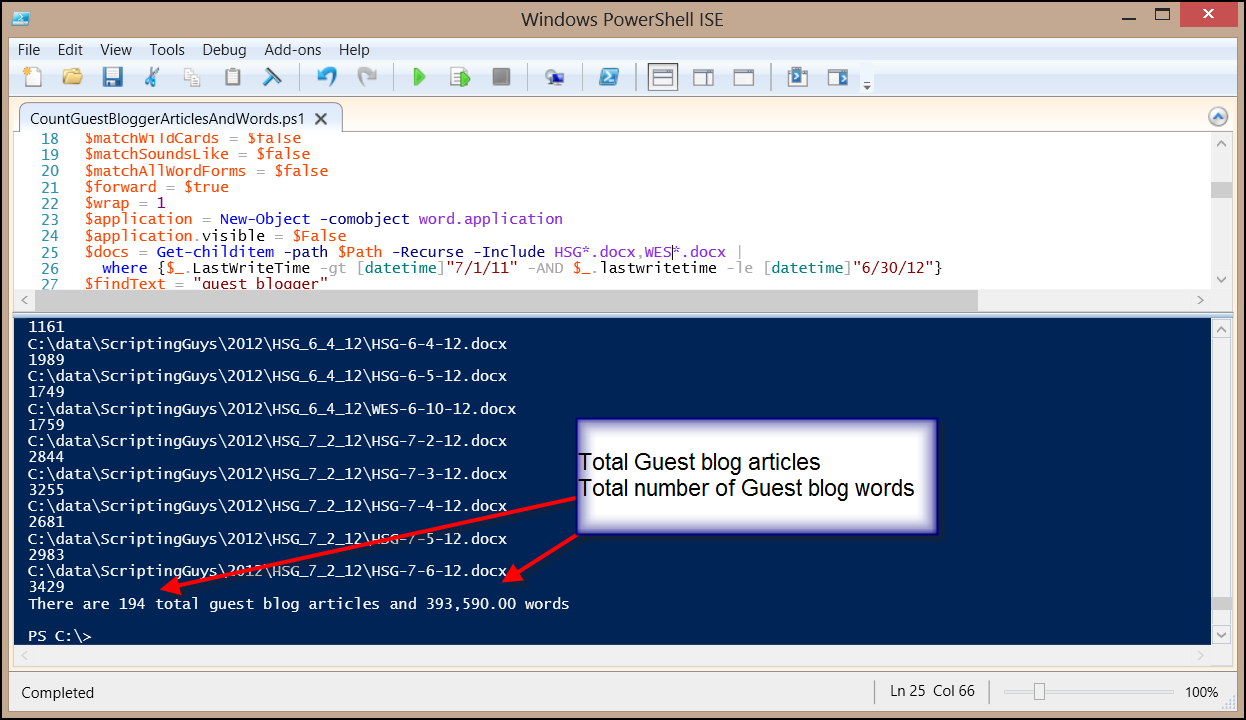 One reason for avoiding COM objects from within the .NET Framework (there are many such reasons, as detailed in my Windows PowerShell 2.0 Best Practices book from Microsoft Press) is the cleanup involved. Resources are not automatically released. Each object must be specifically released. I then call the garbage collection service and remove the Application variable. Here is my cleanup routine for this script.

This is a rather long and complicated script, but the point (other than being cool) is to illustrate an automation model for working with the Microsoft Word. I have uploaded the complete script to the Scripting Guys Script Repository.

Join me tomorrow when I will talk about working with Microsoft Word document metadata.